Cello, I Must Be Growing

1970 brought some significant changes to how sold their Baseball cello packs (and their raks).  Having made the decision to up the wax pack price to a dime, they could no longer offer 36 cards for 29 cents in a rak pak or ten for a dime sans bubble gum. The solution was to go big and add some splash.  Here's how they shaped things in 1970, with an outside box containing a 33 card clear cello, which could be had for a quarter: 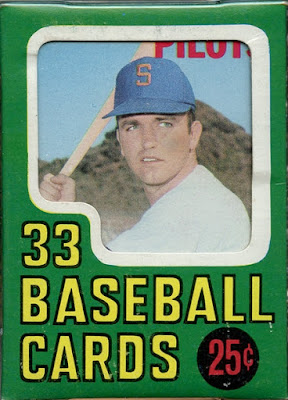 When I was a kid collecting these--and 1970 was my first heavy, heavy year of doing so-- I never realized those mountains were in Arizona! Cactus League shots are more dramatic than Grapefruit League shots, that's for sure.

The reverse of the box had a fairly nice graphic.  It seems this is the pretty much the same size box they sold the 1968 Batter Up Game Cards in, which was also 33 cards, so I wonder of that issue was some kind of a packaging test. 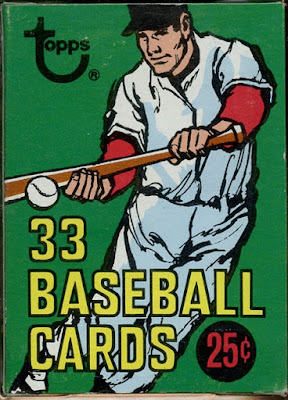 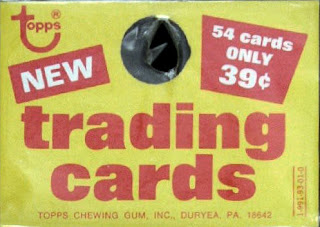 I can tell you the majority of cards I bought from 1970-72, which were my three biggest collecting years back in the day, came in raks, mostly from a fabulous store on Long Island called Coronet, where they hung by the cash registers.. And why not, the price per card was just .0072 vs cello's at .0076 cents per card.  Either way, Topps was selling more cards with far less packaging.

Still, they felt the need to change things up a little in 1971.  Check this out, there is an obvious enhancement, which softened the blow of fewer cards being held in the cello, which was a clear one again: 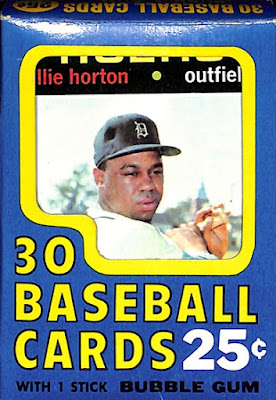 That's right, bubble gum was now wedged within.  I wonder of this was to take the thickness of the three missing cards so the pack fit the box better.  I guess we'll never know.  The back had a new graphic but I've always been mystified why there were no premium offers on these. 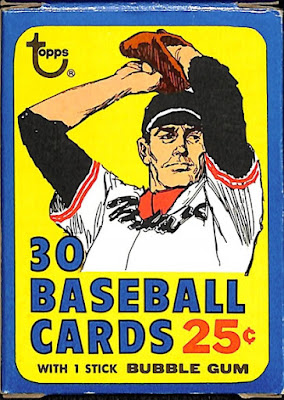 In 1972, with the upcoming IPO, the hedged their bets but ultimately included 27 cards, deployed in a clear cello wrap, they just didn't advertise the count: 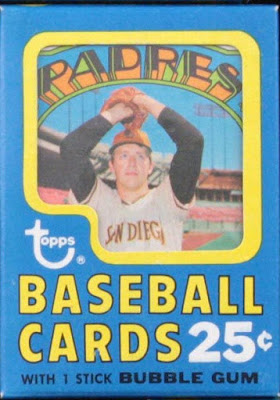 That's a slightly lighter shade of blue as well and the card count has been excised on the reverse too: 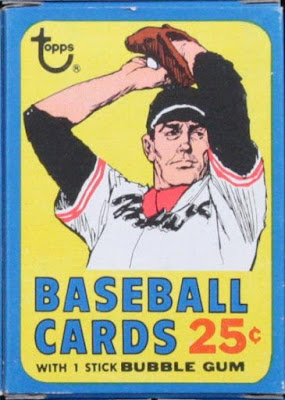 Whatever advantage Topps thought they would gain with the outer box must have dissipated as the 1973 cellos started another trend, cello packs with their own graphics: 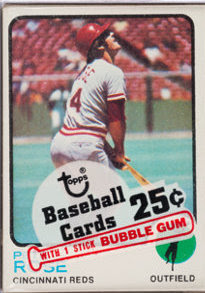 Checklist back of the pack, yuk! 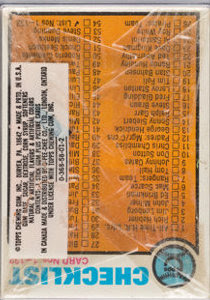 Baseball rak paks stayed at the same count and price through 1973 but the new "naked" cellos still only had 27 cards in them despite losing the outer box and its associated cost. This predated the oil crisis but that shock would reverberate going forward.

At some point I may take a look at the post 1973 Baseball cellos but to me once they stopped issuing cards in series, the whole ballgame changed and things got a lot more generic year-to-year. I'll take a gander at some other sports cellos first for sure.
Posted by toppcat at 8:00 AM

I started with those cellos released in '74, '75. Will enjoy getting a look at those.

I remember seeing these when I was a kid. I usually avoided buying these because to my juvenile mind, these seemed like repacked, inferior cards. Now I know better (I think).

We must be about the same age - '70 was my first big year collecting, with '71 and '72 being the years I got hooked for life. I can remember buying '70's in the 3 wax-pack boxes at WT Grant, '71 Rak Paks (with the coin inserts) at Zayre's and the 72 Cello Boxes you write about here at McCrory's...all on the Space Coast in Florida.

Regarding the '72 Cello boxes, I can specifically remember shopping with my parents and finding 3rd series cellos. I searched through the selection and found a pack with Bob Watson showing (familiar because the Astros held Spring Training locally) and a visible Willie McCovey, with one of my all-time favorite poses. Typically I could only get one pack at a time, but I successfully whined and was able to finagle a two pack purchase by my dad.

I may be wrong, but I seem to remember a Red box with one or both of these packs - is it possible that Topps may have done some mixing of colors with different series or shipments?Just curious...enjoy your blog!!

I'm 58 and other than Zayre's, which wasn't big on Long Island if even here at all, I bought at Grant's and Newberry's which was called McCrory's elsewhere I think (or the latter bought the former in the early 70's).

I too remember a red box but it's for 1970 Football cello's. I'm not sure they would have mixed colors or sizes in individual shipping cases but orders could be composed of different things fr=or the same issue, to a point.