The long-arc Topps test issue story is one that gets pieced together slowly.  Often some original Topps production materials comes up for sale or auction that fills in a hole, other times an old bit of hobby literature or sales catalogs helps write or rewrite some of the story.  Today the former as a recent eBay auction gave a glimpse at the 1968 Superman In The Jungle issue; a test set in the United States but an ordinary release in the United Kingdom.

I've covered both versions of the set previously here along with the even scarcer US puzzle insert that came along for the ride and as far as US Topps test issues go, this is one of the more difficult ones to find.  As far as new information, it's not much but it does reveal how Topps could turn a loser domestically into a salable items overseas.  Thanks to Woody Gelman's Topps filing system, we can finally see this gorgeous Norman Saunders conceptual point-of-sale piece that was featured in one of Chris Benjamin's Sport-Americana Non-Sports Guides of thirty odd years ago: 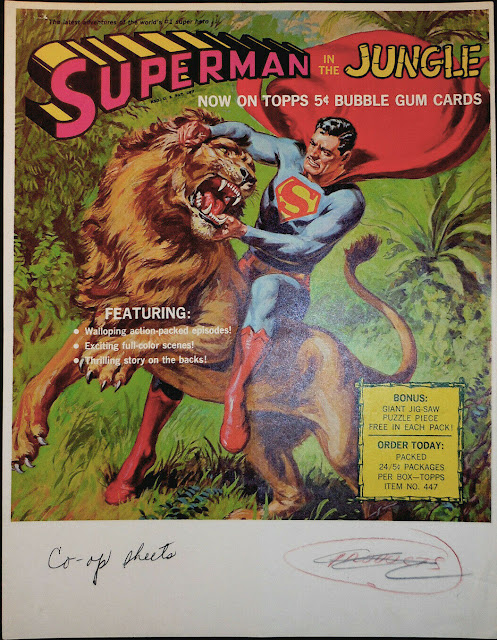 Benjamin, though, did not show what was written along the bottom. The left side is plain enough: "Co-op sheets". On the right though, a little zoom is needed:

That red crayon is in Woody Gelman's hand.  It says "Products" and then someone crossed it out.  I take this to mean the test failed or that some type of licensing deal went kaput, which we already know due to the rarity of these, and that it wasn't getting filed as planned. This scratched out word helps explain, I believe, the meaning of "Co-op sheets".  The co-op must be the cooperative arrangement had with A&BC Gum in the UK (and which company Topps was about to decimate with a series of strategic and legal moves).  The A&BC issue of Superman In The Jungle is readily found, as are the associated puzzle pieces, while the US test is often found in either proof form or very crudely printed and/or cut "finished" form.  Here's a finished type card to illustrate the latter point, it's a raggedy scene: 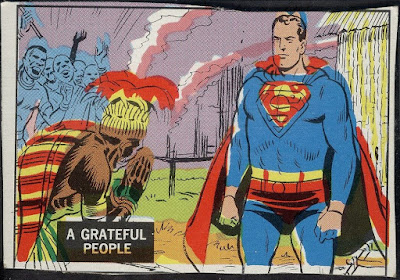 You can see there were registration issues with this card, it must have been a reject sheet from when the test was printed.  The back isn't in register either and as we have recently learned, they were done first and likely in a separate location so it's a bit of a headscratcher: 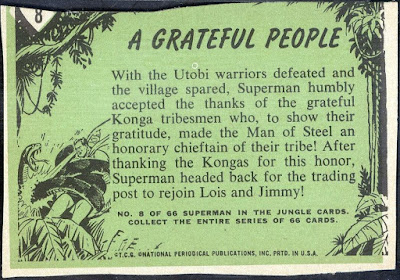 I've seen just enough of these to think at least one sheet was cut up in this manner, likely by a kid of a Topps executive.

The final proofs I've seen are all blank backed but the fronts are very colorful: 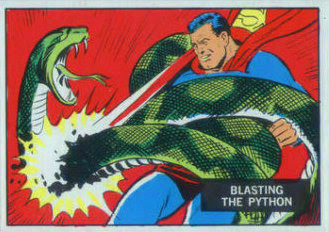 There are various color stage proofs out there as well but they pale in comparison.

My last look at these cards showed a painting of the US test wrapper.  I've now found an actual one and I'll sign off with it today: 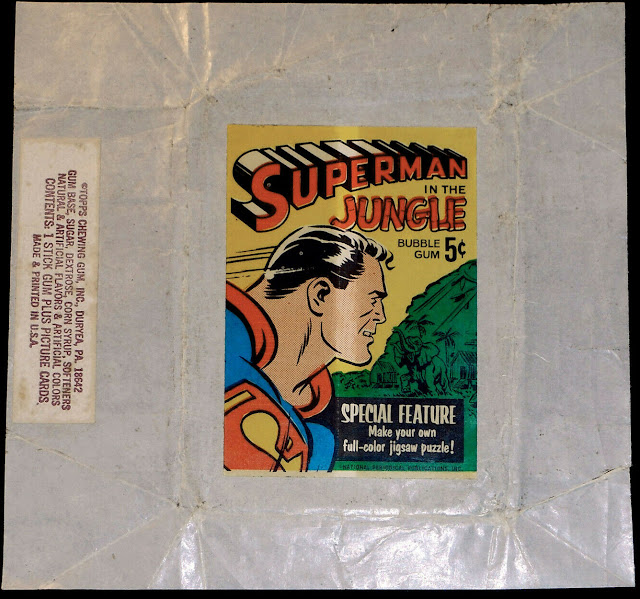