I'll take a slight pause on the Tatoo posts today as it's a lot to take in over four straight weeks like I originally planned and the topic is perhaps best served with a  break in between.  Instead, here's a little treat that, to me, was a completely unexpected find.
I'm doing a very deep dive on Woody Gelman right now and one of the things I have learned is that his stepfather, Sam Rosen, who ran the forerunner of Card Collectors Company, was the most renowned match cover collector in the United States after World War 2.  But the best part is, I think Woody (or more correctly Solomon & Gelman) looks to have designed a matchcover for him.  This is an awesome piece of work: 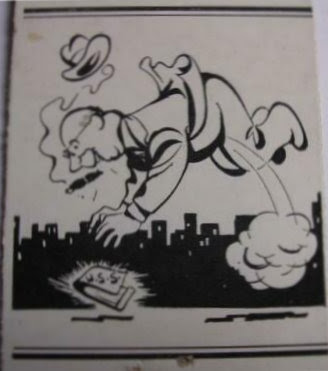 That is from 1949, when Solomon & Gelman were in full force and in the throes of doing work for Topps. I know this because it's quite specifically dated:

R.M.S. stands for the Rathkamp Matchcover Society, the oldest phillumenic organization in the world, and still going strong! Sam was being feted at their annual gathering in 1949 as their Outstanding Collector of the Year. I am advised this was Sam's normal look at the time, scanning the ground for match covers as he walked around.
Here is Sam's business address, which later housed the precursor to the Card Collectors Company. He was in the garment business and this building's location, which I know well, is a match (sorry...that's a groaner) to that nabe : 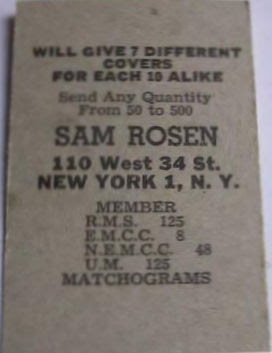 He was in a lot of match cover organizations! I found an article describing how he got his start phillumenically speaking (boredom essentially) over at the Immortal Ephemera site. Impressively, he had only started collecting match covers six years earlier! He and Woody weren't blood relations but two massively accumulative collectors like them must have had some sort of compounding effect on each other.
Posted by toppcat at 8:00 AM