Faithful Reader o'the Archive Jonathan Tomberg recently posted a comment on an old piece from about a year ago on the 1969 Topps Basketball Rulers. Certainly one of the more inspired Topps inserts of years past, the set is skip numbered thanks to Ruler #5, which seemingly (hold on) was to feature Bill Russell, being pulled.  Jonathan asked if the artwork for the Russell had ever been seen and I'm happy to report the answer is a resounding yes.

The 1989 auction of original Topps art and production material by Guernsey's, which was both expository and maddening in its presentation, featured 23 line drawings of NBA players used to create the rulers.  On the face that is 100% righteous as the set has 23 subjects. However, the offered lots of Rulers hid a surprise or four.

Two players in the set, Nate Thurmond and Hal Greer, were not among the lots offered in the 1989 auction.  You may remember these two subject's line art was the centerpiece of my post from a year ago.  Their origin is murky to me, as I cannot locate an auction where they were offered and they may even possibly have been part of the lots offered at Guernsey's as the event featured some items that never made the catalog.

So that means of the 23 subjects from the issued set, 21 should have been offered by Guernsey's plus the art for Russell to get to.....22. What?!

Well, that's a twist! Now look at this mysterious little bit of art that was among the 23 Guernsey's lots:

Two things:
1) That looks very much like Mort Drucker artwork but I am advised it is not and;
2) I have no idea who Rudy Carruso is!
All is not lost though, as it turns out it was Rudy Larusso, who was one interesting (and largely forgotten today) NBA player.  An original Los Angeles Laker, he played one season with the team in Minneapolis before their move west after the 1959-60 NBA season had concluded.  He was a defense oriented Forward who could score and physicality seems to have been his calling card.  Check this bit out from the November 3, 1966 issue of Jet magazine:
: 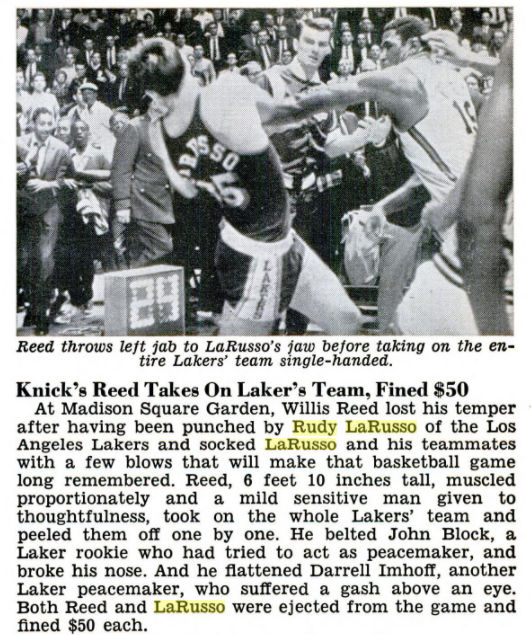 That's not all. I believe it's Larusso, not LaRusso as he was Jewish and not Italian but more to the point in early January 1967 the Lakers traded Larusso to the Detroit Pistons but he refused to report and retired from the game, not wanting to displace his family. He was suspended but eventually an arrangement was worked out with the San Francisco Warriors and his contract was sold to them on August 31, 1967.  But get this-he was allowed to commute from Los Angeles!  He played two seasons with the Warriors then retired (more on this below)  to become an executive with a medical and electronics firm.
As for Bill Russell, he retired from the NBA on June 30, 1969 and his phantom artwork was featured in the Guernsey's catalog; it's pretty great too:

Sports Collectors Digest ran a piece in their November 24, 1989 issue with the image of the Russell art as well:

So the question is, who was supposed to be Ruler #5? Given his retirement date and the fact Russell was the Celtics head coach as well (wow, right?!) he seems like the obvious choice but of the two, Larusso makes more sense after a closer look and here's why.
The NBA and Topps knew the 1969-70 season was going to be the first in a long time without Russell. This article, written by my friend Bob D'Angelo, pinpoints the decision to create the 1969-70 set at some point after Russell's retirement and before Larusso's on October 1st. It seems a little odd that Rudy chose to retire when he did as he had averaged 20.7 PPG in his final season and was named an All Star.  I suspect training camp could have done a number on him as I find references to a bad back and also business opportunities in Los Angeles.
So it certainly seems like he could have been the planned 24th subject, or least more in line for inclusion and the preparation of the Russell artwork now seems a tad optimistic in light of that; perhaps Topps was hedging their bet if Russell was somehow enticed to play another season. That didn't happen of course but as the same time the NBA and Topps would have been well aware of the impact of Lew Alcindor debuting during the upcoming 1969-70 season, even issuing a Ruler of the lanky Center, the only rookie featured in the insert set. Perhaps Alcindor was subbed in for Russell as a subject and then Larusso's retirement caught Topps short an an inopportune time.  It may be none of this speculation is correct but unless something turns up, we'll never know for sure.
In case you are curious, the "Carruso" art sold for $100 and the Russell for $2,250, respectively the least (tied with Gail Goodrich) and most amounts paid for any of the line art, with Russell being the only four figure sale. Add the 10% Buyer's Premium to each to derive the final hammer prices of $110 and $2,475. A collector from Detroit, Bill Schonsheck, brought home the Russell (and it seems all the other offered line art as well). Pretty good deal if you ask me.

Informative article, I wonder if there was ever a 1969-70 Topps Proof out there somewhere

Hard to say with 100% certainty but would have to think it would most likely have surfaced by now, given the prices for vintage basketball.