More Bowman action today, this time courtesy of Friend o'the Archive Keith Olbermann, who sent along three gorgeous scans of 1953 Bowman Color proof cards.  Let's start off with one of the greatest lefty pitchers of all time: 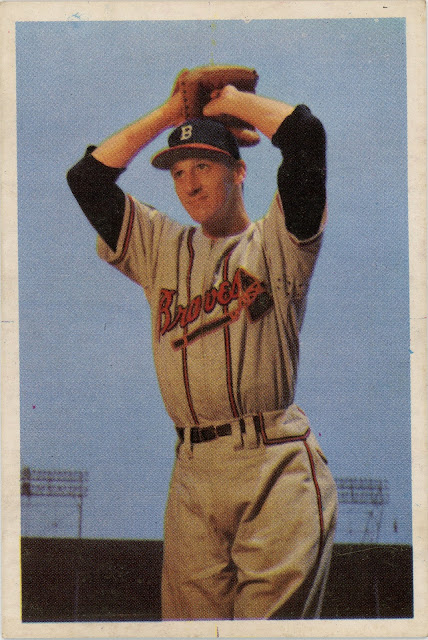 Olbermann describes this proof (and the other two) has having a waxy coating on front that blunts the impact of the Kodachrome photo; the back is also waxed.  That little light blue printer's mark at left is on all three of these proofs and this one has an added tick at the bottom. The backs are blank and on the same white stock.  It's a fairly nice pose but the issued card of Spahn  (#99) was miles better IMO, and includes the dark black neatline that really is so important to the look of the set: That was Spahn's last appearance with Bowman after debuting with them in 1948, not missing a season until 1954 rolled around.  He was also in the '53 Topps set (and every regular issue Topps set from 1951-65).
That brings us to Enos "Country" Slaughter: 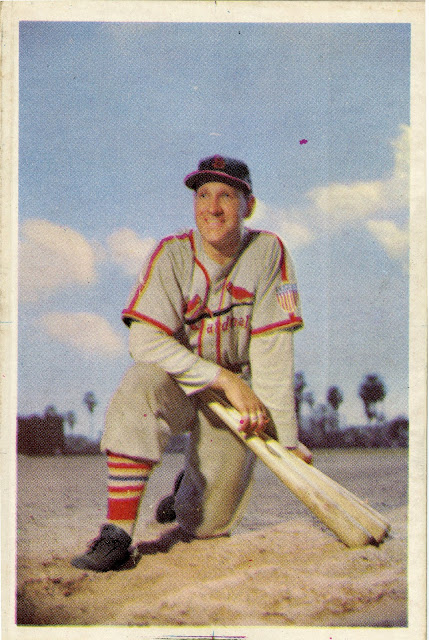 His issued card (#81) was quite similar, with the image shifted ever so slightly to the left. You can really see how muted the proof looks in comparison. You can really see the color registration lines at the bottom and the blue tick mark in the middle of the left border well on this example. 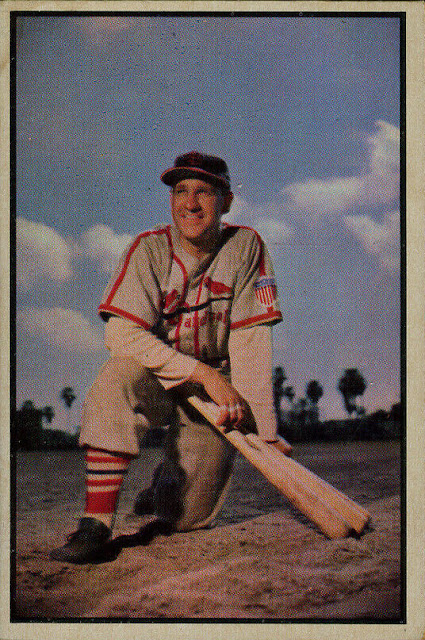 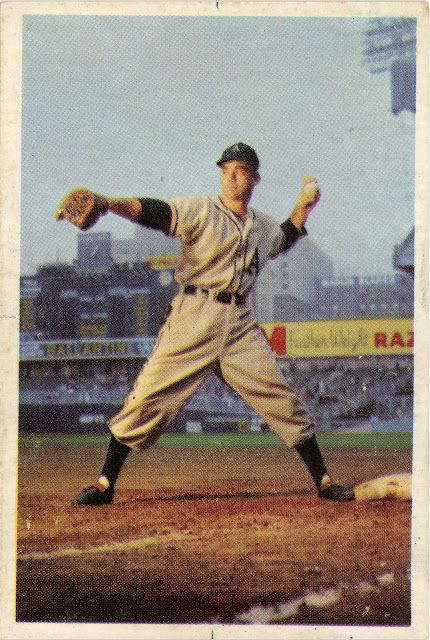 A high average, high contact hitter with somewhat minimal power, Fain won AL batting crowns in 1951 and 1952 with the Athletics (his OBP in 1951 was an otherworldly .451-he would have cleaned up in today's game).  He was traded to the White Sox at the end of January 1953 which may have prevented his appearing in either Bowman set that year but there could have been other issues that kept him out, perhaps a contractual one or the sets were just cut short.  Given his hitting prowess at the time I suspect Bowman would have liked to include him but it did not happen.  He is shown with the Athletics on his 1953 Topps card. That's a great shot of Yankee Stadium by the way!
A fourth proof also is known and was auctioned in late 2001 by Sports Cards Plus along with the three above.  It's dubbed "Dodgers In Action" and I'll grant you there's action but the only Dodger is the baserunner: 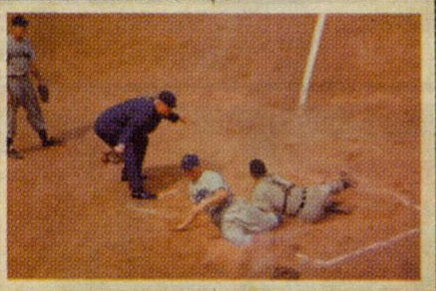 That could be the visiting Cubs making the play but it's hard to tell.  The baserunner might be Gil Hodges but again, it's impossible to see with any clarity.  This is reminiscent of the famous Pee Wee Reese card that Bowman issued in 1953.
The proofs got the attention of Sports Collectors Digest in their December 28, 2001 issue: 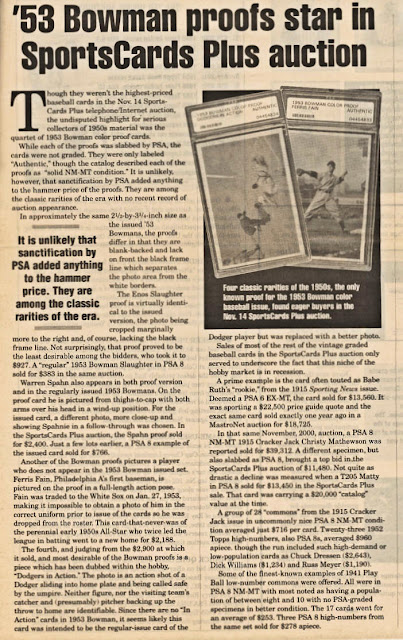 Aren't they great?! More than one copy of each appears to exist as Olbermann's trio were acquired well before SCP's auction and remain in his collection.

Those are awesome 1953 Bowman is one of the best sets, and I haven't seen those proofs before.

The photo Bowman went with for Spahn is all-time for clarity, uniform detail, and look-em-in-the-eyes personality. Great to see its proof comparison to appreciate the final product even more.

The waxy front and backs make me think these could have been test pressings for a FOOD ISSUE, as they were becoming common at the time. Just my thoughts. Great post.