Well Hallowe'en, or what passes for it now, is a couple of days away kids!  Every year, when it rolls around, I am reminded of one of my favorites as a trick-or-treater, a sleeve of Bozo bubble gum balls.  I was all about chocolate and bubble gum as a kid, with the chalky Necco wafers, Mary Jane's and the like going to my dad straight out of my bag, while I hoarded $100,000 Bars, Baby Ruth's, Almond Joys and any and all bubble gum. 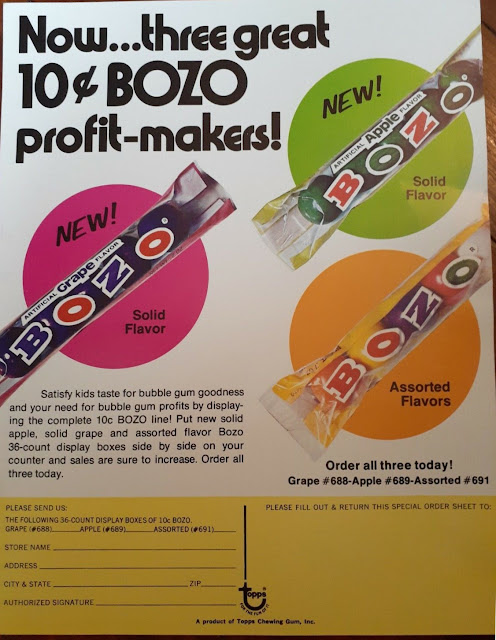 I always seemed to get the assorted flavors and the whole shebang got popped into my mouth in one swoop once opened.  Happy days!

Bozo was a very early Topps product, sold in bulk originally to the wholesalers, who in turn supplied the folks with vending machine routes and businesses.  It was a very important early line for Topps and they were able to avoid a lot of packaging costs by dealing in bulk.

This July 29, 1950 Billboard article indicates a surge in popularity for ball gum, which caused some consternation at Topps (or more likely, their PR firm).  At a guess, this is when all those red topped Oak vending machine "trees' started appearing in the exit corridors and vestibules of grocery stores: 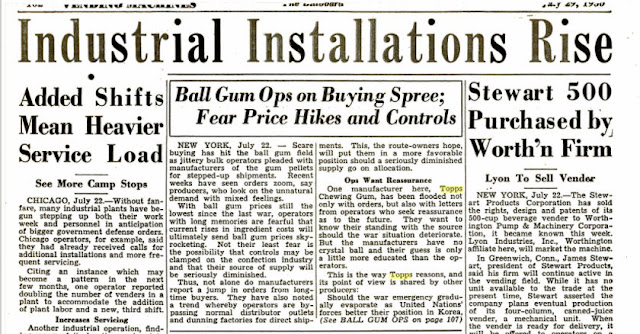 Bozo popped up in something resembling the party-sized Bazooka boxes found in stores for a spell in the 1960's but it seems to have flitted in and out of US retail consciousness for a couple of decades, possibly due to waxing and waning legal issues with Bozo the Clown.  It seems to have had a more sustained existence in Canada and there were countertop vendors that carried the branding, distributed by O-Pee-Chee: I think a good supply of "new old stock" Bozo gumball machines has been unearthed as you can find those pretty easily in close to pristine condition.  Those were clearly designed to sit on a countertop as the top just screws off.
There were four or five flavors available along with the assorted: 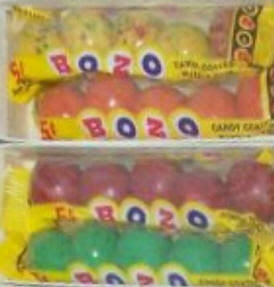 I'll have to hit up my grand-nieces and nephews next week to see if Bozo even makes an appearance anymore!
Posted by toppcat at 8:00 AM