And Then There Were Three

Well, hopefully everybody's worked off their post-Thanksgiving torpor! Assuming so, I am looking for a little help today.  67 years after it came and quickly went, the 1955 Topps Hocus Focus self-developing issue remains a thorn in my hide, at least in terms of completing the full checklist.  To refresh your collective memories, Topps issued the set in two sizes, a 96 subject affair known in the the hobby as "Large" and a 126 subject nightmare similarly dubbed as "Small" with the size of the card dictating, i.e. the Large cards measure 1" x 1 5/8" while the Small ones clock in at 7/8" x 1 3/8", which was the same size as the first Topps Magic Photo cards from 1948, which used a similar process to develop the images.

When I published my book covering Topps in the years 1938-1956 a decade ago, I realized that the checklists for both sizes had been hopelessly co-mingled and set about to extract one from the other.  It turned out the first 96 subjects in each size were shared and that Topps had issued an additional 30 cards in the smaller size, which were unique.  They took five of the subsets and added either five or ten cards for this "extended" 30 card series (I hate to use the term high numbers here because the last 30 Small cards exists in the same numbers as the first 96 in that size). This numbering scheme has caused confusion since 1955!

Look at Johnny Schmitz's two cards here.  The 1955 (Small) has four imperforate edges, since they were only issued with penny tabs of gum, inserted between the inner and outer wrapper: 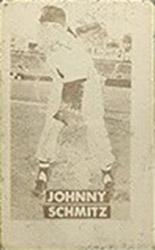 The reverse has a short question that also, with a little bit of research, revealed his E.R.A. "feat" (second best, really?) occurred in 1954: 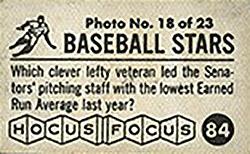 Note the number in the black circle at bottom right.  That's the overall set number for Schmitz, where as the Photo No. 18 of 23 Baseball Stars represents his subset numbering.  So he is 84 of 126 subjects in the Small Hocus Focus set. The Large size Schmitz is identical in appearance on the front...

...while the reverse shows the score lines used to separate one of the large cards from another as these were issued in panels in five cent packs. In addition, the subset numbering of 16 of 18 has been altered to reflect the smaller number of Baseball Stars issued in the larger size, while the overall set number remains at 84, in this case 84 of 96. However, while we know the subset numbering is 2/23, we don't know Lou's overall set number.  I can tell you it's either #97 or #111 as every other subject has been identified in the 1-126 sequencing. The other hole is that of a World Leader using one of those two numbers (and either 17 or 25 of 25 in that subset). The only other unknown is the subset numbering is #123 Jefferson Davis (perversely a World Leader and with a subset number that's also either #17 or #25) although a reliable source relayed his details to me (but I'd really like some scans).
I know these are out there, but who has scans?  I'm partially holding up the second edition of my book due to the missing subjects so am quite anxious to get this sorted.
Posted by toppcat at 8:00 AM

I have a bunch of these Hocus Focus cards I recently discovered. Specifically have a Jefferson Davis one and it’s indeed #17 to answer your question. I can send photos if you want them to verify. Any advice on what to do with these cards I have about 30-35 of them? Should I get them graded by someone like PSA?

We actually have the small Lou Gehrig card marked 2/23 with the number 111 on the back. Would be interested to know the value of this card. Hope this information helps.