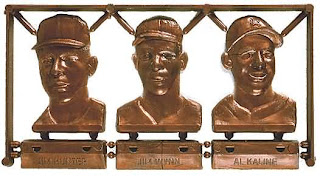 EDIT 11/26: Jeff Shepherd left some valuable comments and here is some better detail on Bush Terminal
Posted by toppcat at 3:14 PM

I've been down there Dave - only 10-15 minutes from my place in Brooklyn - massive warehouses entire avenue blocks in length. The earliest location I have for Topps is 60 Broadway in Bklyn, the Gretsch Building right off the Williamsburg Bridge...now luxury condos. Topps then made the jump to Bush Terminal, 37th St., sometime in the 1940's. Around '57 or so they inched one block northish to 36th.

The door was open one Saturday so I gave myself the grand tour...no hidden storage room of unopened wax and test issues, but all very original inside - concrete, bad windows, florescent lighting.

They must have moved in after WW2 as Bush Terminal was involved in production for the war effort from the limited Googling I have done.

I have been by there on the Gowanus a few times but never stopped in!