In 1970, with Topps in the midst of a multi year run of top notch inserts in their baseball (and other) packs, a colorful set of interactive cardboard panels appeared. Scratch Offs were a brightly colored set printed on thick cardbooard.

Here is what the front and back look like, no matter which vintage (they were reissued and reinserted in 1971): 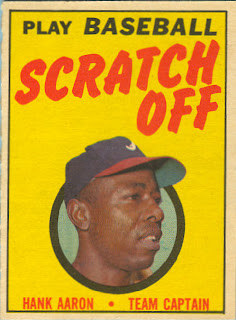 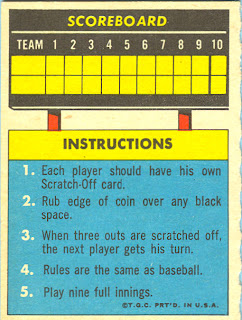 Folded, these measure 2 1/2" x 3 3/8". When opened they revealed a large panel with 44 black blocks that gave off a distinct optical illusion. 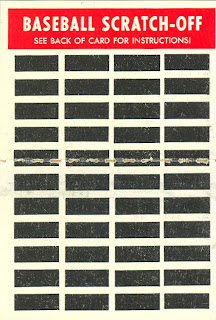 Notice the white interior color. In 1971 it turned crimson: 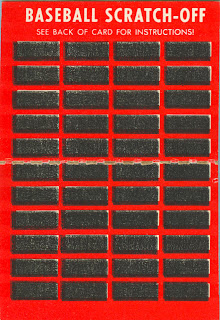 Each block had a baseball play printed under it such as "Single" or "Out" and you could keep score on the back. Oddly enough for me, my hybrid set is intact and I can't show a scratched card. Each team in MLB at the time had their own team captain and the set is loaded with hall-of-famers. We played this game for hours back in the day. The red is probably in shorter supply (I have 5 red and 19 white interiors in my randomly assembled set) but these are pretty easy to find and there is no real pricing difference.

There is a reference in an old wax pack article that mentions a rewrapped pack for the Scratch Offs, renamed “Pocket Sized Baseball Game”. Rewrapping insert cards was a Topps hallmark, helping to siphon off excess inventory from their warehouse and selling it to the public, but I have never been able to locate a copy or even a scan. It would have to be one of the rarer Topps wrappers out there if it exists and I have to think it would be in a test wrapper format. (NOTE 7/12/11: It is not a re-wrap but an entirely separate issue.  Click here for details)

The uncut sheet shows off the three colors used for the fronts; this is likely from an Ebay auction last year: In 1973/74 Topps issued another scratch off with the Action Emblem cards. These were tallboys (even tho' the Action Emblems were standard sized) and while they were the usual 2 1/2" wide, they were a whopping 4 11/16" tall. The scratch off material was different this time out and there were no team captains but the play was the same. 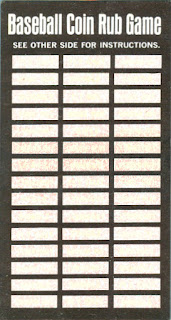 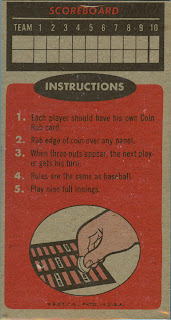 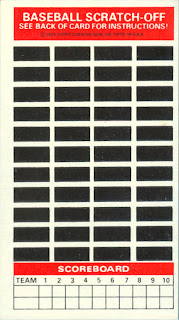 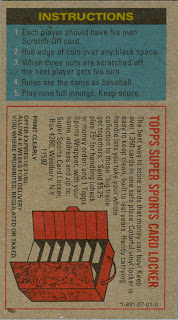 These were also 2 1/2" wide but a fraction shorter than in '74 at 4 1/2" high. Their distribution is a little murky but Bob Lemke of SCD thought they might have come in Jumbo Packs in 1980 (the back has a 1980 production code and the offer on the locker expires on 12/31/80) and Topps was selling cello packs with a couple of dozen cards or so packaged above a pack of stick chewing gum at the time, all overwrapped in an elongated wrapper. A look at the production codes shows a match with Major League Baseball Gum's 931 product code and the back of the scratch off card, so it's a good bet Mr. Lemke is correct:

While it is technically a year past my arbitrary 1980 bright line, Topps resurrected a 108 card set with a twist in 1981 as it was issued over 36 three card panels, as shown in a recent Ebay auction: 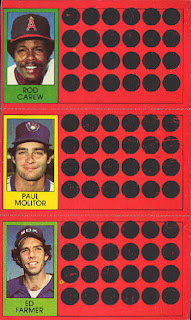 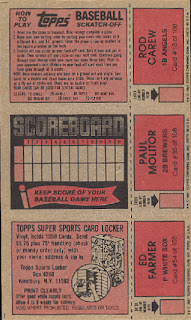 Before being ripped into its three component panels, this big boy measured in at 3 1/4" x 5 1/4". The set was marketed on its own and is one of the better 80's efforts from Topps.
Posted by toppcat at 6:17 PM

I've been going nuts trying to figure out the difference between a '70 and '71 Scratch-Off for a while now, and was able to grab the card I needed off of eBay this morning. Thank you so much for shedding light on the mysterious world of the Topps Scratch-Offs!

Ah, the wonders of color scans! Glad I could help out.