One of the fun things about this blog is you hear from all sorts of people and many of them have extremely useful information or interesting stories. Such was the case when I heard from not one but two of the subjects in the 1971 Topps Winners set, discussed previously (and with more to come), a surprise I alluded to a few days ago.

Last time out the checklist for this set was fleshed out to fourteen subjects, among them a certain Lisa C. Bole. While Lisa was not illustrated in the previous post, she was kind enough to send me a scan of her card: 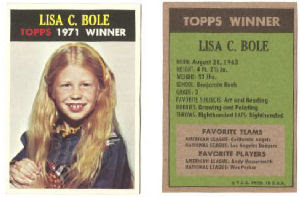 As it turns out, Lisa is from California and that is the state she resided in when her mother entered the contest. Lisa wrote:

"I was one of the Topps 1971 winners, and so was my sister, April Bole (her card might have said April D. Bole, I don’t remember). Mom was really great about entering sweepstakes and had good luck winning! I was only 8 years old in 1971, and my sister was 6 years old. I remember our cards came in the wax packages, mixed in with real cards and a stick of gum. All the wax packages were in a box. Mom put the two boxes in a closet and was going to try to save them, but my little brother got into the boxes and took everything apart so he could eat all the gum. So I no longer have any sealed packages, but I still have some of my cards." 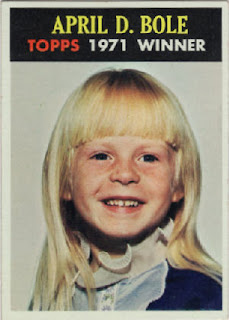 "I was also a Topps 1971 winner and was surprised and amused to find that there were people out there actually interested in this. I was six years old in 1971 so I'm not sure how accurate my memories are but am happy to share what I can remember about it.

I believe it was a nationwide contest which makes it all the more surprising that both my sister and I were winners. Like my sister said - my mom was really into entering contests back then and she was extremely lucky. I'm guessing from your picture of the box proof that there were 25 winners in total. We were in California.

No baseball or software experience (or even interest) was required. All that was needed to enter was a parent willing to fill out an entry blank and mail it in along with a photo of their kid (in my case it was my kindergarden class photo). Although I did become a huge baseball fan a few years later... my mom made those up (Angels/Dodgers/Jim Fregosi/Don Sutton)...
As winners we each received one sealed box of Topps baseball cards. Within each box were several sealed wax packages (I'm not sure the number but think it was probably the normal amount that came in a box of baseball cards). Each wax package contained 10 big league baseball cards, one of your personal baseball cards and a stick of that wonderful sugary cardboard gum. In addition to the box with our cards sealed into it we also received an additional stack of our baseball cards. The number floating in my head is that it was 1000 extra cards - but when I picture the stack in my head I think it was maybe half of that. As far as I know, our cards were never released into general circulation. We had our stack to hand out to our friends or to do what we wished with - but that was it....For a long time I had the box and a few of the wax packages taped together (my brother opened them all to get the gum) but am not sure where they are now."

Well well! As it turns out both April and sister Lisa are going to kindly send some additional scans to me and I am told one of the original boxes still exists. I can only assume the boxes were 500 count vending boxes but we'll see.

I now believe our pal from my initial post, Vernon Grover, could have been from Maryland and with the Bole sisters confirming the Golden State was their home in 1971, this looks like it was a national and not regional contest. I now have hopes the other 10 Winners will be identified someday. More on this a little bit down the road, i.e. when I have some more scans to share.
Posted by toppcat at 7:42 PM

I guess I am not the only one mad at their brother. I wonder if he has any idea what he did?

Now that's totally cool. Awesome posts, both of the winners cards and the updated stories.