Topps spent a significant part of the 1960's selling or inserting stamps into their baseball packs (and others, not addressed herein). 1961, 1962, 1964 (in guise as a Bazooka issue) and 1969 all saw stamp sets. After a little break, Topps tested another stamp series in 1974 and it was, in my opinion, the best of the bunch.

The wrapper reveals the test issue status of this set: 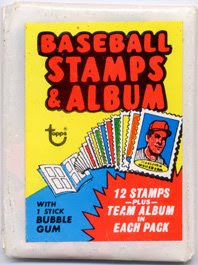 I believe that pack belongs to John Moran, who has a mind blowing collection of Topps goodies, but I could be mistaken (your blogmeister was less diligent about the origin of scans prior to last year).

As you can plainly see, the pack held, in addition to a delicious stick of gum, twelve stamps and one of 24 team albums. The stamps were panelized: 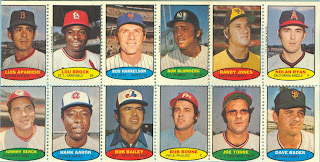 The clipped sides of this panel are common but they can also be found unclipped, which is a tougher deal. There must have been a major find of the clipped versions as you can buy full 24 sheet sets of them on Ebay almost at will. Full sized stamps should measure about 1" x 1 1/2".The albums however, at just under standard size at 2 7/16" x 3 7/16" are not common and quite difficult to locate: 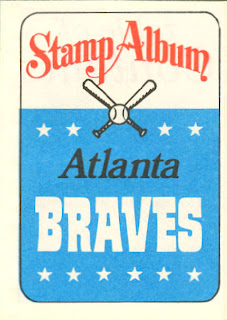 The above album is fairly well centered, also an uncommon trait and miscuts abound, as we shall see below.

The back features an autographed ball of the dozen players within: 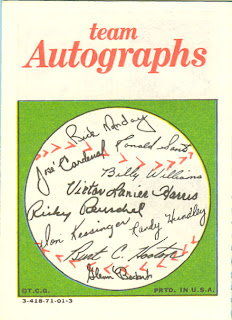 You're not seeing things, the scan is from the back of the Cubs team album, not the Braves.

The interior had a table of contents and the front part is impinged, a result of its assembly at the printing plant: 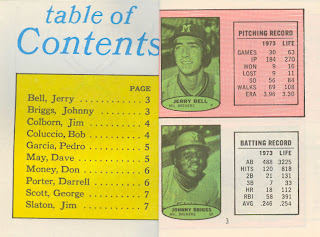 The inside followed a similar approach: 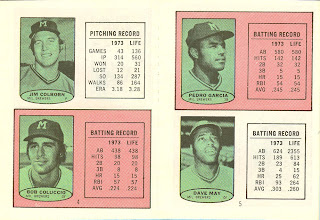 You can see typical cuts and colors below: 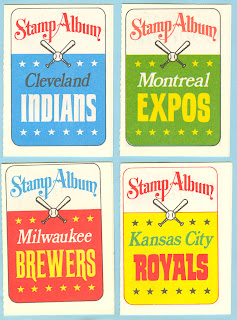 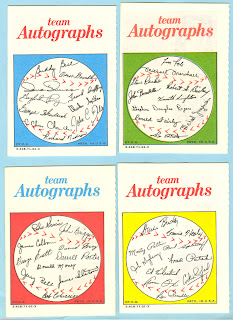 This colorful set is loaded with Hall-of-Famers and was part of the last gasp spasm of test issues from Topps in 1974. It would never be the same again.
Posted by toppcat at 5:12 PM