Topps was in the middle of a nice run of inserts in 1969 and as the 3rd series of baseball cards hit store shelves in late spring 40 years ago (!), the youth of America tore apart their wax packs to find a small set of "crinkle cut" (to use the British cartophilic term) black-and-white player photos. Topps would also issue a set of 48 full color decals in '69 that mimicked the regular card design but I have found conflicting evidence as to whether those came with 2nd or 5th series cards but which make them fodder for another day. The Deckles likely were continued into the 4th series packs, for reasons that will become evident.

The photos are printed on white stock and have a gel gloss coat somewhere between that of a regular card and a real photograph. The deckling is similar on all cards and they measure 2 1/4" x 3 1/4" or standard insert size for the era. While the set is a bear to put together in nice shape (say NM or better), in lower grades it can be had for under three figures. As you will see though, centering and printing issues make high grade examples scarce. Here is Hall of Famer Hoyt Wilhelm, in all his off-centered, scratched-up glory (the stippling is a scanner artifact): 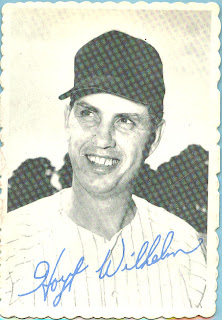 Now this card (#11) would join with that of Rusty Staub (#22) and be replaced mid run for reasons that are unclear to me. Jimmy Wynn would take over the 11 slot: 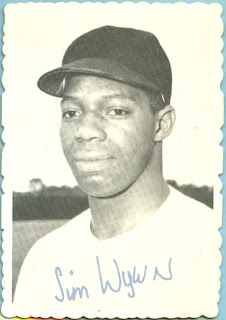 But why? Neither Wilhelm nor Wynn changed teams during what must have been late winter production of these and Hoyt already had a logoless cap and non-descript uniform in the photo. Perhaps Wynn actually replaced Staub in that he represented the Astros following the January 8th trade of Rusty to the Expos (the first in a series of events that would make him the beloved Le Grande Orange). Here is Rusty now (one of my favorite players by the way and a true humanitarian): 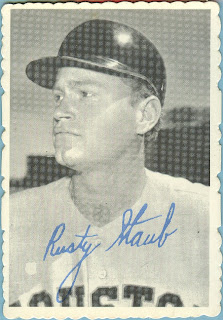 I can see why Rusty's uni top might warrant a change following the trade but to replace him with Joe Foy (the other #22)? Madness! It's not like the back of the card mentioned the team either: 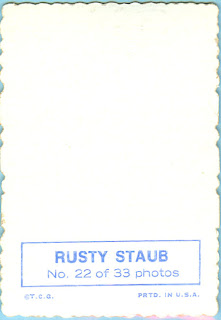 Plus there was the matter of the checklist, which Topps helpfully added to the reverse of the 3rd Series regular-issue version: 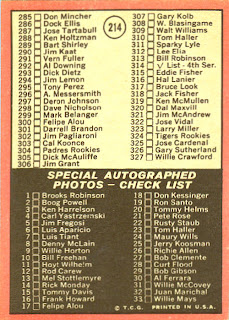 You can plainly see Wilhelm and Staub were part of the initial subjects. Their replacements are harder to find so their print run was lesser and likely later. It has been imparted to me that the Wynn and Foy cards only were issued on the west coast, which may indicate they were inserted in a second run of 3rd series packs or in 4th series packs, although the series' would have been blended by Topps, as was their wont back then. There is some type of connection between tougher cards from the late 60's and 7-11 stores I need to suss out someday that may explain why the west got the two tougher deckles.

The wax wrapper heralded the inserts: 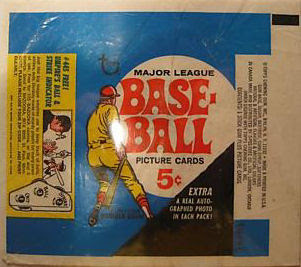 I take exception to the license taken with the word "real" but no matter.

Deckles were proofed in late 1968 (sans application of pinking shears) and the autographs can be found in red, blue or black as you can see from these nicked scans (sorry, I can't find a scan of the black). 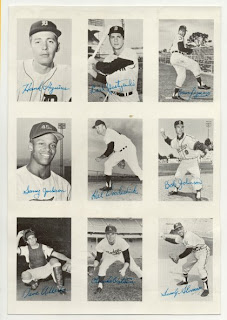 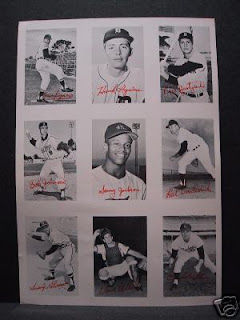 These are out there as panels or singles if you look hard enough; only the nine players on the sheets above are known. For the most part, the players and poses did not carry through to the regular set, Yaz being a major exception. 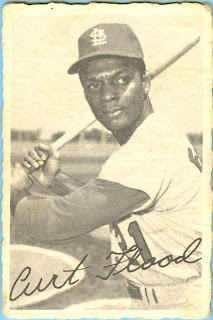 Deckles would re-appear in larger format five years later, as previously discussed, but in 1969 they were a neat little insert that had a few problems but ultimately went on to become a classic; much like a certain baseball team from that summer and fall.
Posted by toppcat at 8:22 AM

Regarding variations - Topps was trying to get at least one player from each team. Staub was traded to Montreal. Wynn was an Astro.

Wilhelm was drafted by the Royals, but traded. Foy represented the Royals.

Scans of the cards in the set: http://www.deanscards.com/SubCategory/223/1969-Topps-Deckle-Edge-Insert.aspx

I was able to purchase all the deckle varations at local stored in mid-central Wisconsin in 1969. I'd say that an exclusive West Coast distro for any of the 1969 Topps cards is definitely untrue.