The Long And Short Of It

I took a hard look at some data on the 1953-54 World On Wheels set recently to see what kind of patterns might emerge in my quest to determine how the two very short series of high numbers were distributed.  The most obvious pattern is that the first 80 cards are locked into a repeating series of eight cards based upon the color of the information box on the obverse.  This would follow a precedent set by the 1953 Topps cards, which were grouped by their obverse color blocks on the press sheets.  As there are no uncut WOW sheets that I am aware of, the 53's will have to serve to illustrate the principle: 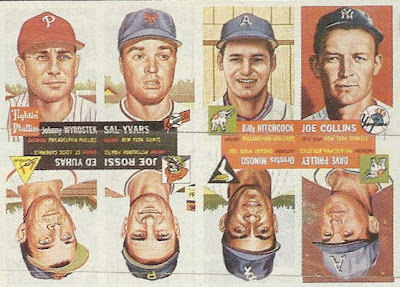 It would appear that it was preferable, at the time, to group large blocks of color together, even if it meant the backs would have to be coordinated with the fronts and half would have to be printed upside down: 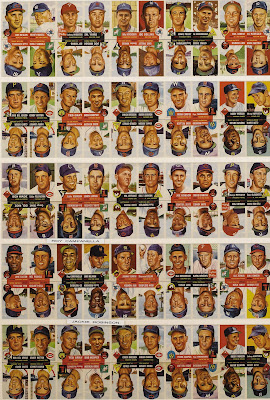 The next year, Topps would print the 54's in a way that I think illustrates how the WOW sheets would have been composed: 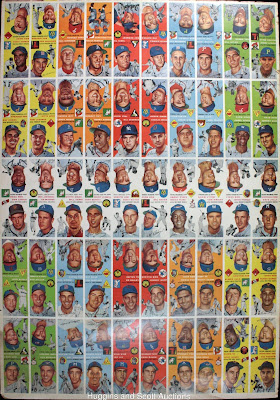 Notice how the predominant pattern is grouping of the background colors into clusters of eight; World On Wheels first 80 cards follow this type of grouping as well.  To refresh your memory, here are the first 8 cards in the set: 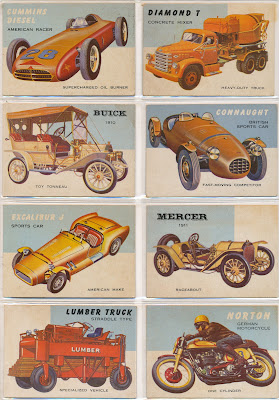 In addition the first eighty cards of WOW consists of subgroups of 4 that have two full bleed tops and one left side block and one right side block, except for the final group (red) that has no full bleeds.  All three main types of vehicles (Sports/Speed, Antique and Modern) are well represented in this first group of 80.  Sporty or Speedy cards have full bleeds, although Topps screwed up one or two.  Antiques and Modern cards have partial color blocks.  In case you are wondering, there are 56 sporty/speedy cards, 67 antique and 57 modern in the full set.
The next group of 12 cards then follows a pattern of 2 reds, 2 greens, 2 pinks, 2 yellows, then 4 consecutive blues, all but one of which (a sole antique model) shows a modern car and mostly the 1953 models at that.  This color pattern then almost repeats over the next 12 cards. But 12 is unwieldy and if you are counting along at home that brings us to 104 cards. That certainly seems at odds with the logic of the design of the sheet since after #100 the mix of the three car groups returns. However, if you divide the blues into two groups of 2, the pattern reverses and runs blue, yellow, pink, green, red, resting at #100 with not a post 1953 model in sight. All well and good but the earlier of the two wrappers clearly advertises the set as covering the period of 1896-1954:

Hmmmmmm................
Since Topps press sheets were actually two 100 card half sheets printed together on a 200 card master sheet at the time, my guess is that the first 80 WOW cards were printed on both of the 100 card half sheets with 20 slots left available on each.  One sheet would have a run from #81-100 then, while the other could have had a single printed run of #161-170 on it, with another 10 cards from the #1-180 run overprinted,  or perhaps just a double printed run of these ten.  The first 100 cards of the set are quite easy but the scarcity of the high numbers makes it hard to believe a large run was issued of the ten high number cards.
So now I wonder if a second printing of the first 100 cards took place, without the 1954's included, or vice-versa.  When I was a kid, all the boys in the neighborhood would go nuts over the new car models introduced each fall. Had I been buying WOW cards in late 1953, I would have wanted a look at the 1954 models very badly. Topps may have made the cards showing these into an early version of a chase card, seeding very few of them in the packs.  Extrapolating further, having issued cards showing the 1954's, Topps then pulled them for another run solely of the first 100 cards and sold only this true first series in cellos, which would not have had the 1954 descriptor on the wrapper, just the generic Trading Card Guild logo or even nothing at all.
Starting at #101 the color patterns become more random but the left/right/two full bleed color blocking returns for a bit.  And then, at #125 we get a run of cards where the left and right bleeds become elongated, one each in a matched left and right combination, and ten in overall number, ending with a red grouping that concludes at #144.  This indicates a ten card grouping that could have been designed on the fly for some reason; maybe my first theory is wrong and the second series had the #161-170 cards mixed in where this grouping of ten elongated bleeds fell on the sheet but I suspect not.
Take a look at these two cards to see what I mean.  I'll show the normal "short"  bleed first, then an elongated one: 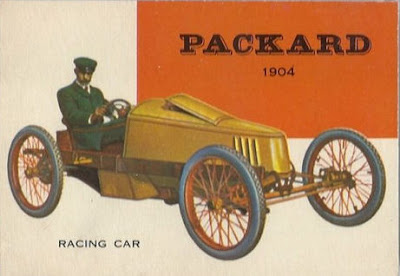 35% of the card top is white.  Most of these left/right bleeds in the set are this way.  But in our little ten card mini-run, they look like this: 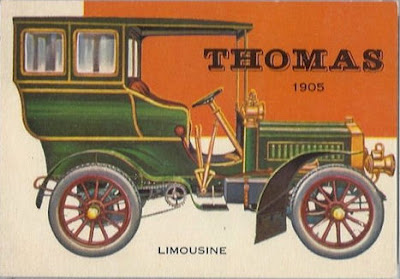 Only about 20% is white.  To match up with the upside down red counterpart, another elongated left bleed card was needed.  I am not sure why this elongation occurred; perhaps it was designed after all the other cards had been finished.  Another oddity is that the rest of the low numbers that appear after #144 are all of the antique variety, all the way out to #160, somewhat mirroring the #81-100 run of modern cars.
Now at this point in the set we get to where #161-170 should be inserted but given that they are priced half again as much as the "super high's" that have blue backs, I don't think that they were printed after the first 160 cards.  What did come later were the 1955 model cards that comprise the super highs.  And thanks to Friend o' the Archive Lonnie Cummins, we have a wrapper that shows a date spread culminating in that year: 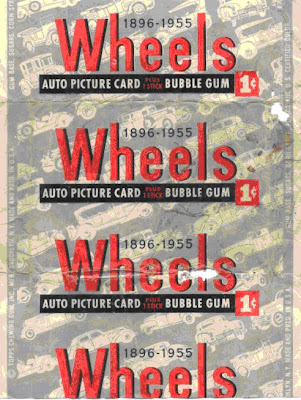 There would have been a nickel pack issued as well; the '55 dated wrappers are tough and not even John Neuner, the "Wrapper King" knew of them and they do not appear in the Non-Sport Archive wrapper book.  Remember that the last ten cards from #171-180 come in blue backs and much, much scarcer red backs.  Remember too that the color bleeds touching the left or right card edges on the first 170 card fronts do not fully extend to the edges on the last ten, nor does the big block with the card title on the back.  The last ten cards were clearly designed and printed in a different manner than the 170 that preceded them.  Let's look at the three varieties again, full bleeds first: 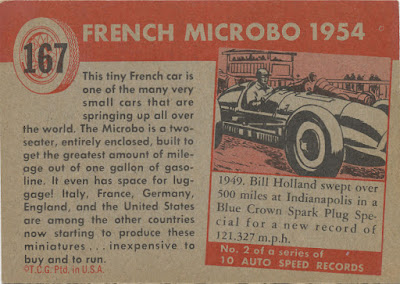 Then note the difference below with the color bar: 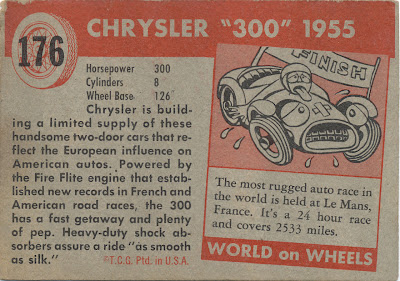 See how the bleed of the title color bar stops before it hits either the left or right edge?  The same thing occurs on the blue backed cards. 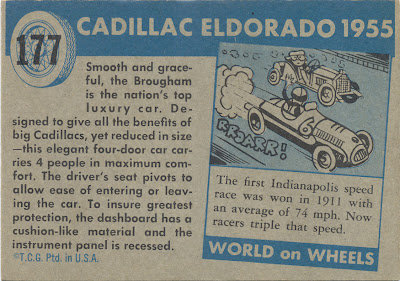 All of the first 170 cards have full bleed color bars on the back. Now the switch to blue is a huge mystery, even to this day but this is just about as weird.  It's almost like they were printed with another set and shuffled into the WOW packs.  One issue that had a similar blue motif on the reverse was the 1955 All American set.  AA would have been printed right around the time the new 1956 models were introduced though, not the 55's. 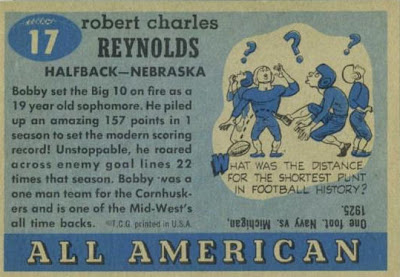