On our last adventure, I discussed how Topps transitioned their gum tab size 1949 Flags of all Nations set into the larger, maybe-not-as-nice 1950 Flags of the Word-Parade as they abandoned their ultra small cards for something a little more sizeable.

This transition happened so quickly that the gum brand used for the first issue, Parade Gum, was recycled for use in the larger set. This was not always how Topps did things but they were just slinging out product as 1949 rolled into 1950.  Here, in a scan from Chris Benjamin's Sport Americana Price Guide to the Non Sports Cards 1930-1960, is how the smaller, tab sized cards were sold, 120 to a box: 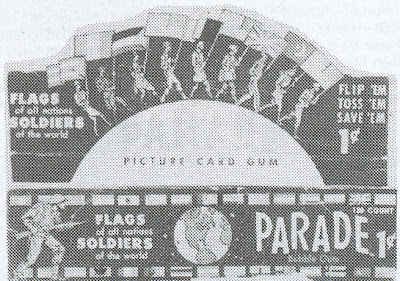 I've already shown the gum tab here, so won't repeat myself. In 1950 you could get the cards for a penny, or for a nickel.  I don't think Topps had quite introduced the ten cent Trading Card Guild cello packs yet, so those were your two price points.  Here is the penny pack: 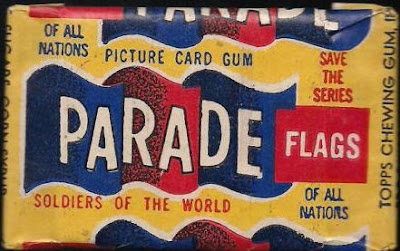 Basically, nothing changed in terms of what the cards and gum were called. The 1950 box, which still had a 1949 copyright, was a bit lackluster; the really colorful Topps packaging was still about a year away, as this scan of the nickel box from an old Legendary Auctions catalog shows: 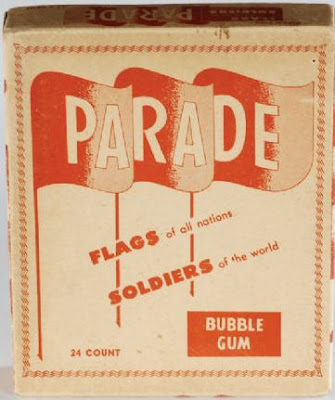 The nickel packs and wrappers are very, very scarce.  Here, in another scan from Benjamin's indispendable guide, is a sample that also has a 1949 date (even though these are definitely from 1950): 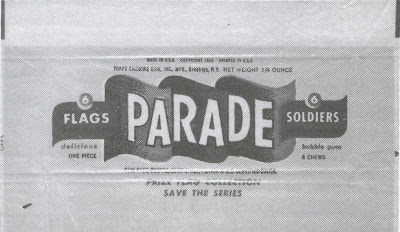