Attack Of The B's

Those Bazooka ads from 1948-49 keep popping up on Ebay.  Primarily published in DC/National Periodical Publications Comics and Boys Life Magazine, Topps was spending quite a bit of money on comic strip ads featuring "Bazooka, the Atom Bubble Boy". While most of them appear to be designed as one page ads in Superman and Detective Comics, I think I have found one from a magazine of the era (probably not Boy's Life though) that was a two page spread: 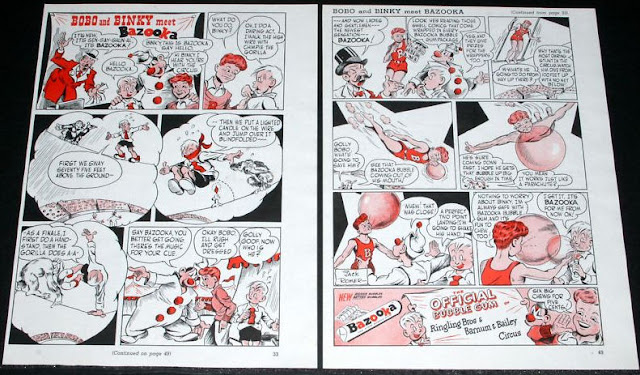 The lack of cheap, pulpy paper and the use only of red and black tones strikes me as being from a magazine, where full color would have been an expensive proposition.  The subject matter is standard fare of the era, no doubt drawn under the auspices of Solomon and Gelman.

The Ringling Brothers tie-in was consistent with the themes of Topps in 1948-50 where gum brands such as Carnival and Parade were prevalent.  In fact, I wonder if this ad is not from a circus program the more I think about it.

Update 4/17/11: Just after I posted this, Jeff Shepherd advised the ad is from a Ringling Brothers Magazine and Program and I just noticed the artwork is signed Jack Romer, who illustrated for the Ringling Brothers Circus for many years. I am thinking the ad is from the 1948 edition as the page numbers in '49 were assigned to something else and Topps announced their promotional deal with the circus on May 1, 1948.  As you may have surmised, I have not found a 1948 table of contents but that year's program does have another, shorter Bobo and Binky feature in the front of the program.
Posted by toppcat at 6:38 PM