Well we finally have a scan of the rest of the 1948 Bazooka Catalogue covered here a couple of weeks ago, courtesy of BFF o'the Archive Jeff Shepherd.  First off, here is the entire back of the mailer: 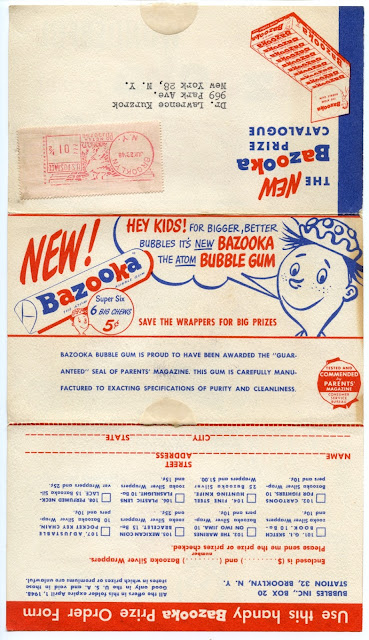 I guess we have to talk about the kid in the crown hat (is that what they're called?).  He was the first Bazooka mascot and may have pulled double duty as a Topps mascot as well.  Apparently unnamed, he was phased out in favor of Bazooka the Atom Bubble Boy (BABB) around 1949-50.  Why they did not use this kid more is beyond me.  Whereas BABB is a bland, generic goody-two shoes, this guy looks like he might be up for anything from a game of marbles to a quick round of mumblety peg.

Here's a closeup of the middle panel (the panel with the mailing label is detailed in my prior post): 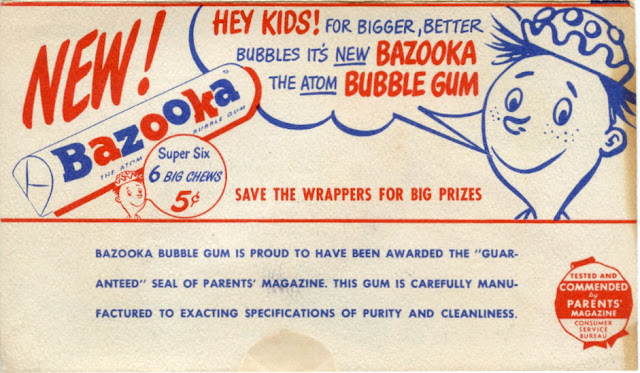 That Parent's Magazine Seal was a big deal to Topps early on.  The bottom panel, which I have helpfully up-righted, is a bit more interesting: 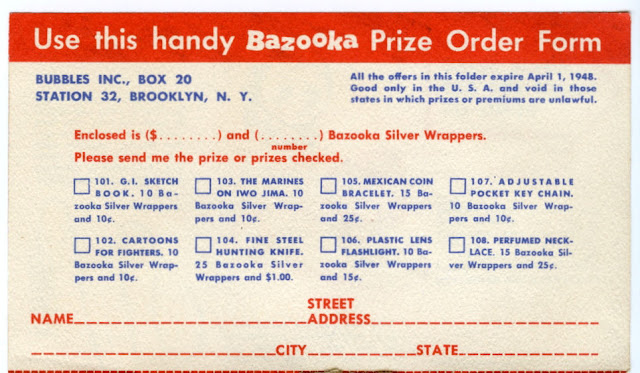 The big prize is the hunting knife and I'll bet if they offered that today there would some kind of special committee formed to investigate.  The date though, is quite interesting and I have t think with the lead time involved back in those days, this mailer was first issued in 1947 and probably right when Bazooka debuted for real in September of that year, especially since the first premium group is represented.  There had been a test run of the bubble gum that started around June but I don't think the premiums came until the official roll out on Labor Day Weekend.  There would have been a corresponding insert inside the nickel rolls of Bazooka.

The specific PO Box in Brooklyn mirrors a trend established when Topps moved to Bush Terminal in July, 1946.  Instead of their street address of the time, they switched over to a postal box.  Bush Terminal offered many services to their tenants and among them were mail facilities designed for high volumes. I'm not sure if this PO box was one of their though; I think it belonged to the US Post Office.
Posted by toppcat at 6:33 PM

Interesting how the "send in" prizes all sound so cool even for me at this age.
The online "coins" that Topps put up as your "prize" for buying 2012 baseball cards really match up to the possibility of a Mexican coin bracelet, or a fine steel hunting knife?
Not even close!