I last wrote here about the 1951 Topps Ringside set last year, detailing a very impressive ad panel among other aspects of this landmark boxing and wrestling (five cards) issue.  I have now obtained a cut set of the eight cards that comprise this panel from Friend o'the Archive Adam Warshaw and they fit together like a, er, glove: 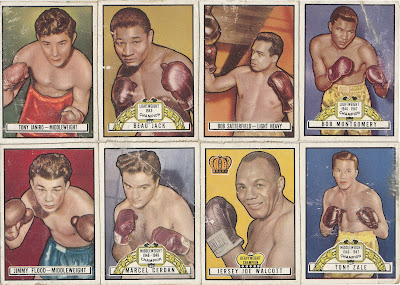 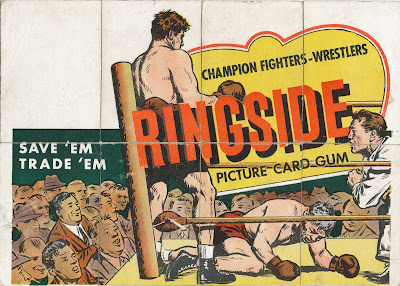 There are similar panels for Fighting Marines, another 96 card set issued in two series of 48, although those seem a bit harder to find and I am unable to post examples today.  There were three other sets issued in this size (2 1/16" x 2 15/16"): Magic Football (1951), Look 'N' See (1952) and Scoop (1954). Fighting Marines was to have been a 1951 set but it was delayed into 1952; my guess is it came out just after Ringside. The ad backs replicate the box top art in Ringside and Fighting Marines; Magic Football did not have such colorful graphics and I can't recall ever seeing an ad backed version of cards from that set. Look 'N' See and Scoop did have colorful graphics on their retail boxes but again, I have not seen any ad backs from those two sets.

Too bad Topps did not make more ad panels for their earlier sets like these.  There are numerous types of ad and salesmen's panels they did produce from this era, of course, but they are not done in the same format nor are they nearly as nice as these.
Posted by toppcat at 9:54 AM