Many collectors are familiar with the 1949 X-Ray Roundup issue from Topps.  These small, tab-sized cards featured 200 subjects divided unequally between Indians, Savage Tribesmen, Wild West Figures, Pirates and Screen Stars who had appeared in Westerns.  Not too many though, are familar with a premium from a bread company called Aunt Hannah's, which featured stamp versions of X-Ray Roundup, replete with an album page that held 25 stamps.  I am working on better scans but right now here is a shot of one of these hybrids: 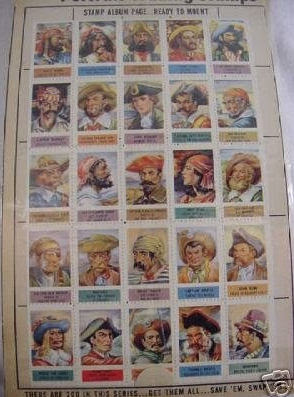 You can't really make it out but there are holes on the left side so the page could be inserted into an album, hence the title/instructions at the top.  The bottom tag line is interesting "Save ;Em, Trade Em" was a Topps promotional  phrase printed on wrappers in 1950 and early 1951; perhaps they were toying with it first as this page has a "Save 'Em Swap 'Em" line at lower right.

I believe all 200 subjects were issued in stamp format but the larger sheets these quadrants came from were not organized enough to support eight pages of specific subjects.

Aunt Hannah's was a Pittsburgh baker and was a subsidiary of Baur's Bread when the stamps were issued. They had a long history of premium offers and were a well known company at the mid point of the 20th century. They had a spiffy looking delivery truck back the day to boot: 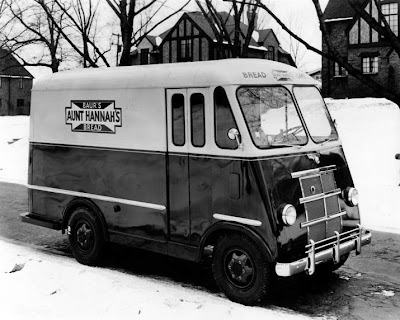 Here's a World War 2 era premium they offered; it gives you a good look at at the character of Aunt Hannah: 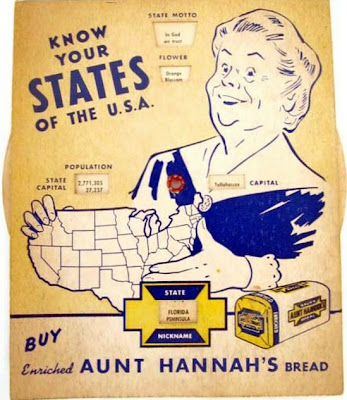 I'll dig out the other stamp scans and get them posted just as soon as I can.
Posted by toppcat at 7:42 PM

I have 2 Sets of the Aunt Hannahs "Portrait Trading Stamps"
25 stamps to a card.
I have Pirates and Indians.
I received these new in the 1950s.
Would you like to see scans?
Bill