Once they left the postage stamp sized gum tab inserts behind at mid-century, Topps started selling nickel packs with two-card panels (usually three of them) and a big chunk of gum. The first two sets to receive this treatment were both reissues of 1949 releases that came out again in 1950.

Flags of the World-Parade took the same artwork from 1949's cards and just blew it up: 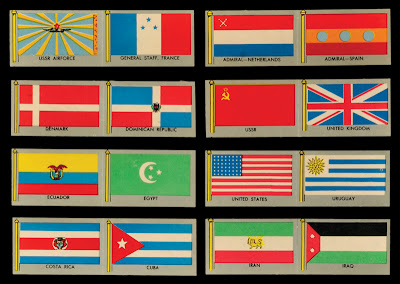 Those panels are why so many cards from this era have little nubs on either side; the ones from penny packs did not. License Plates also came this way in their 1950 version:

The degree of precision one would expect in scoring these at the printer's is not reflected in the finished product in many cases; here is a good example of the misalignment that frequently occurred, handily made visible in the scratch of material from the panels's reverse: 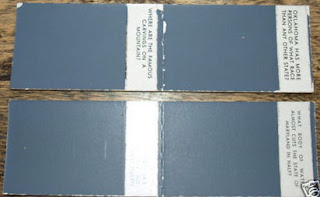 The elongated nickel packs these cards came in are not out there in great supply today and even the wrappers are scarce. These packs predate the Trading Card Guild red cello's that would start appearing in 1951.