I have always been interested in old photographs of New York City and Brooklyn in particular. Any explanation as to why would be futile at this point but point me to the shelves at a bookstore and the NYC section will be thoroughly examined for old shots that predate the 60's. One of the biggest publishers of old photo and postcard books is Arcadia Publishing and  they have a line second to none.

Arcadia Publishing has, for two decades now, published a line of books that feature old photographs of city scenes. This past January I found a chance shot of Debevoise Street (home to the Topps antecedent American Leaf Tobacco Company at #7) in one of their books.  The shot was from about 1906 and predated the ALTC's occupancy but captured the building that housed this Morris Shorin concern to a degree.

Now I have stumbled across Images of America: Williamsburg, by Victor Lederer and the Brooklyn Historical Society, another gem from Arcadia. Sure enough, another chance shot has delivered a glancing look at 140 Throop Avenue, where Morris Shorin was in business with a man called Louis Metz (or Melz) selling tobacco around 1905-06.  This address may have been home to an earlier American Leaf Tobacco Company in the late 1890's, which was owned by another family but may have planted the name in Morris' head for future use when he incorporated his ALTC in 1908.

Here is the full shot, dated around 1925, which is after the ALTC would have moved to 7 Debevoise St., looking east along Flushing Avenue to the right and Whipple St. off to the left.  Completing the triangle's third side, 400 feet or so in the distance, would be Throop Avenue. #140 is at the end of the block on Flushing: 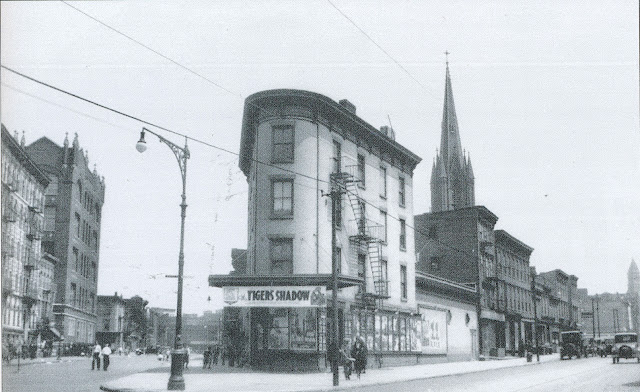 140 Throop Avenue is, I believe, showing a portion of its very low white roof just above the first automobile parked along the curb on Flushing; a rectangular lback sign hangs to the left off a trolley pole just above it as well. The property essentially completes the point of the triangle at Throop and Flushing, much like the Tigers Shadow signed building (which is the White House theater) does as the intersection in the foreground, with frontage on both streets.  Here is a slightly closer (and grainier) look: 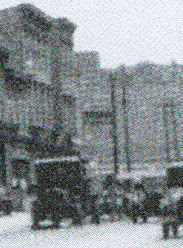 On the left you have the three story building with four windows across, another building that is slightly taller with three windows across and then the sliver of little white roof showing a couple of feet above the auto that I believe is #140.  I can't enhance it any more unfortunately. All the poles at the intersection are for trolleys; three lines converged here, making it an ideal retail location to sell cigars and, in a back room I imagine, run the ALTC proper.  Most of the buildings in the middle of the block along Flushing Avenue, including the two mentioned above (and which have between them but invisible here, a low, narrow building among the smallest I have ever seen) are still there.  I've marked it in blue here to make it ever so slightly easier to ID but have to admit it's pretty muddy:

Here's a detail from a 1929 Belcher Hyde Fire Insurance Atlas that shows the block, with Flushing Avenue at the bottom and Throop Avenue angling up from the bottom right of the map: 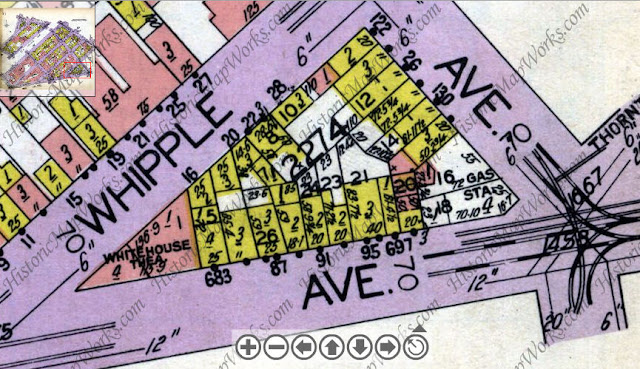 Some or all of the location in white marked "Gas Sta." is #140; but I do not believe it was ever a location of American Gas Stations, owned by the Shorin's in the 1920's and 30's.  You can see there are three lots on the intersection and city real estate maps show #140 Throop as occupying some or all of them at various points in time. I suspect common ownership of the lots, which could have had four or more buildings shared across them in a semicircular arrangement with the pointiest section perhaps being a yard.  If the building is still original then it had a number of bays within; indicative of a possible former use as a stable and also future use as a garage.  Perhaps ALTC was processing and packing cigars and tobacco here as the bays would allow shipping and receiving but I have always assumed they just operated the administrative end of the business out of here.

This location is still an auto repair shop today, although the pumps look long gone.  I am trying to determine if is the same building, at least along the Flushing Avenue side, that housed ALTC but have not yet tracked down when it was built. It's a strange property that has been greatly altered over the years but a prime retail location, or at least it was 100 years ago.


I still hope to find an image of an ALTC storefront but for now this will have to do.
Posted by toppcat at 7:37 AM

The was a gas station across from 704 Flushing Ave ..It think it was a Texaco ..what is it you are looking for ..I grew up on that block

I'm looking for a picture of anything that has American Leaf Tobacco Company on it. Either from 140 Throop Ave or 7 Debevoise St, letterhead, business card, matchbook.

Will keep an eye out,American Leaf Tobacco Company was way before my time .