I would be remiss if I didn't mark the 75th anniversary of Topps, which actually occurred about two or three weeks ago.  Topps has celebrated the occasion with a 100 card base set called, simply enough, Topps 75th. I recently purchased two boxes and am pleased to report it's a pretty nice little set.

The packaging is a bit dark, which matches the Topps PR on this set, which seems pretty low key all things considered: 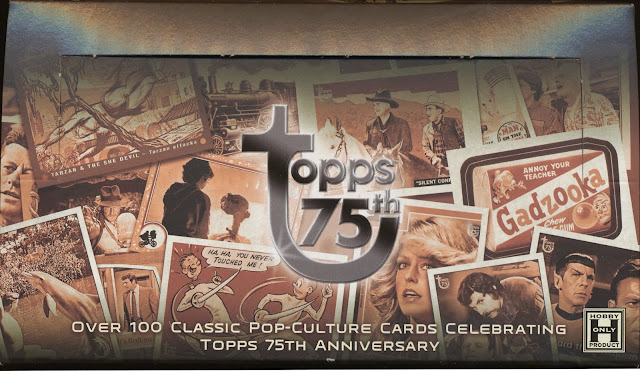 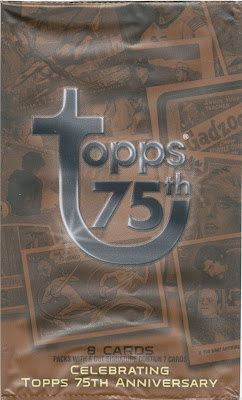 This being a modern set, there are a number of chase cards and inserts, in addition to base parallel's (1 per pack, in a nice rainbow foil):

The Duryea address is interesting as I have not kept up with the indicia of the 21st century. There are 24 cards per box and 8 cards per pack so you get 192 cards in each box.  The card fronts are familiar of course but a 75th anniversary logo (which I quite like) has been added: 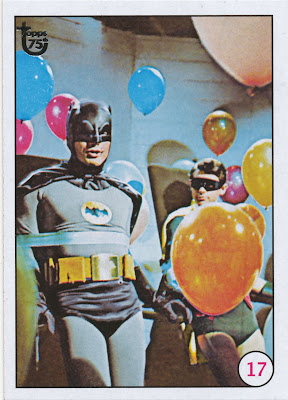 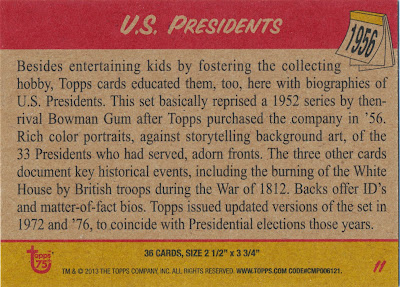 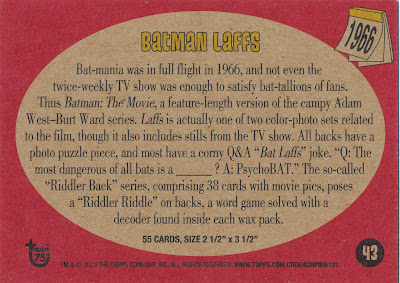 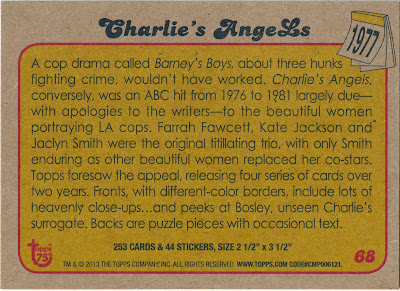 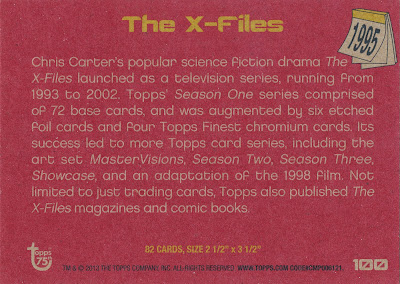 The red makes things a bit muddy on many cards unfortunately.  However, with the bad comes good. For a couple of sets where there was a front/back feature, Topps included a small representation of the reverse: 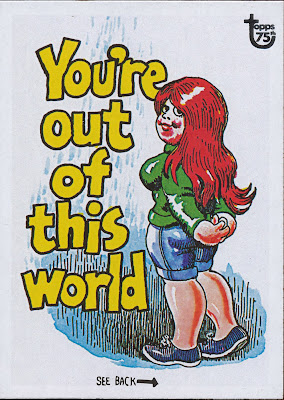 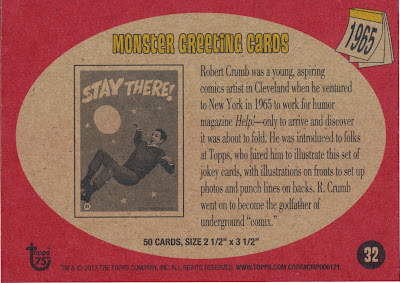 These appear to be hobby only boxes and I'm not sure if anything is planned for the general public. The card stock is quite sturdy, so kudos to Topps. Topps guarantees three autograph and one buyback (original) card per box and both boxes broke down this way. In addition, each box yielded a complete base set of 100 with no more than one duplicate of any card and I had no duplicates among my 48 base parallel cards.  This base parallel is quite shiny but my scanner gives only a hint: 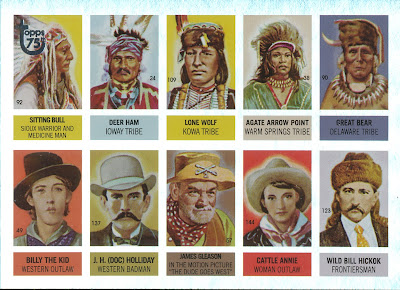 Topps did a real nice job representing their original penny tab card with the block of 10 X-Ray Roundup cards; Magic Photo also got this treatment. The backs of the foil parallels are much, much brighter: 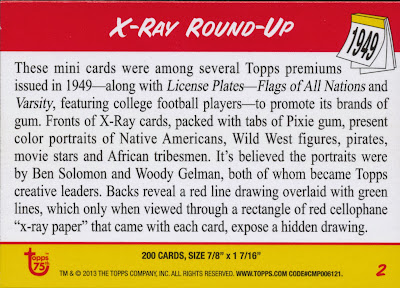 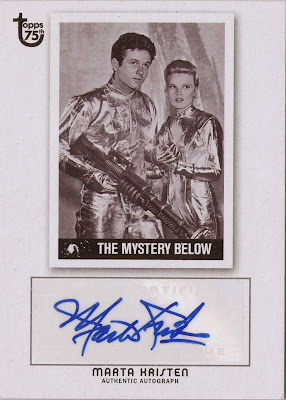 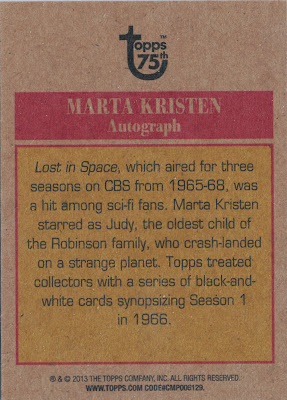 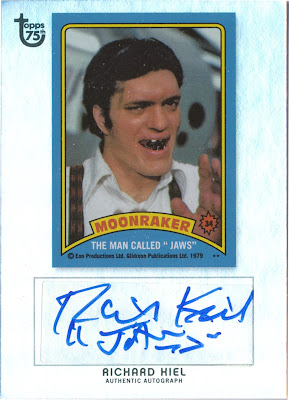 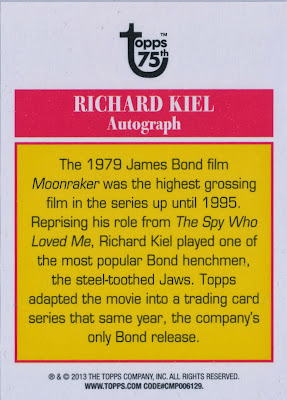 Topps used a relevant card for each autograph it appears as the Lost In Space and Moonraker cards in the base set are different, so brah-vo! At least one autograph subject appears with a card/subject (X-Men), not in the base or insert sets; there could be more but checklists are hard to find for some of the subsets.

Two insert subsets really make this a 116 card set to my mind.  The easier of the two consists of eight mini cards, representing smaller sized issues of the early 1950's.  These are actually smaller than the base cards at 2 1/16" x 2 15/16", or the size of Look 'N See and Scoop.  I have to say these are really neat: 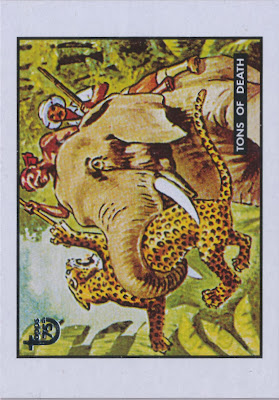 The font is a bit off, a problem Topps has these days due to the original graphic elements being long gone (they were actually pasted to the artwork back in the day).  Here is a (different) back of a mini: 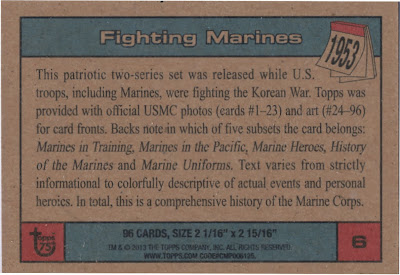 The mini checklist is not being widely publicized:

I got six of the eight over two boxes, with two dupes.  I am not sure if the mini or test (below) inserts also have parallels. Then there are the test inserts, which are one per box: 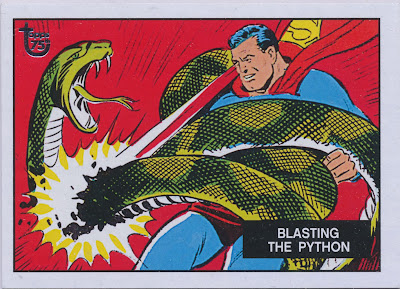 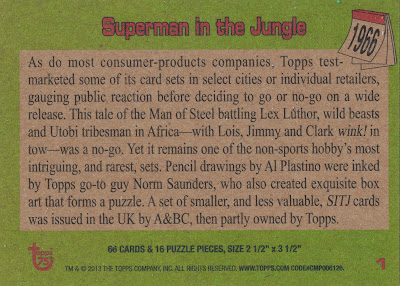 Once again, the checklist is hard to find:

I;m not sure if a full case would result in eight of those but I got two different across my two boxes.

My original buybacks were pretty ho-hum.  I got one per box plus a second one in box two that is a little different, Here is a normal one, where they added a gold anniversary stamped logo: 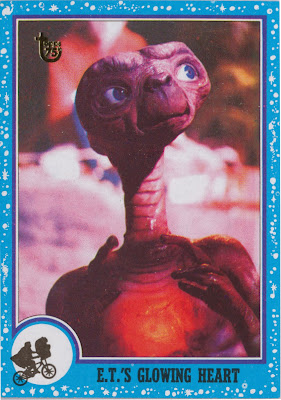 My "oddity" though has no stamp, not sure if they missed it or there is some unannounced parallel/insert thing going on: 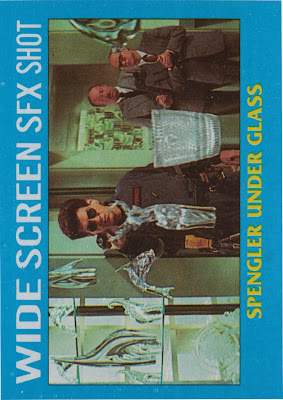 I also nailed a Diamond Sparkle (called Anniversary in some promotional material) card of Ben Casey: 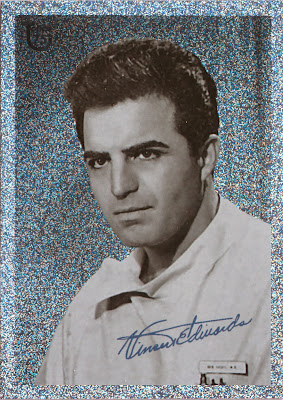 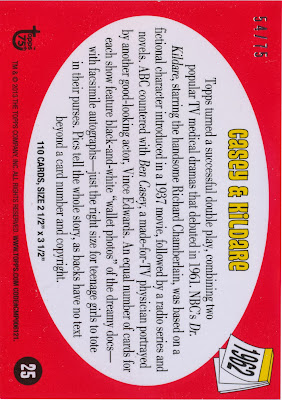 That is numbered 64/75 if you are keeping score at home.

There some other goodies; I BIN'ed a Printing Plate card plus a Modern Glossy.  There is also a Topps Vault/eBay exclusive: 1 of 1 blank back for each card.  However, there seems to be no representation of any tatoo issues or any actual stickers included as inserts or in the base set proper. Given the importance of tatoos to Topps bottom line, the former seems a bit odd.

I'm still reviewing all the card writeups on the backs but there could be a couple of changes to my database, although I do see one date that is wrong.  The set is also not 100% chronological, some cards issued before others come after them in the numbering, although they are "in the neighborhood"as they say.

I'd say they've gotten fat and lazy in their old age.


I was glad to see that Adam West's "BATMAN" received an invite to the party.
Happy New Year!!

Awesome, love everything Topps puts out.

I really like the idea of this set, thanks for the write up.