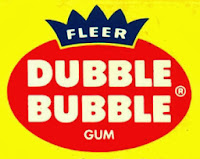 I do like to delve into the 1950's bubble gum battles between Bowman and Topps and am hoping someday to take a really in depth look at Bowman Gum (someday meaning post-retirement!) but there was another rival Topps had to deal with at the end of the decade-the Frank H. Fleer Corporation.  Fleer was actually a much bigger threat to Topps than Bowman ever was and they used many of the same tactics Topps did to wedge the company into the bubble gum card market.

Frank H. Fleer was one of the pioneers of the confectionery business in the United States. In some ways his back story is as murky as that of Morris Shorin but that appears to be more due to a lack of solid research than anything else. Fleer was born in Westphalia, Germany in 1857 although some sources state 1856 or 1860.  But as evidenced by his gravestone it was 1857: 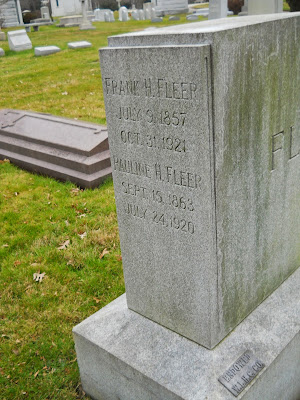 He is noted in some references as Colonel Fleer but I'm not sure if that was earned or simply an honorific. I have found some citations that state he founded a Philadelphia flavoring business in 1849 but that is clearly impossible and a little poking around reveals his future father-in-law, Otto Holstein, was responsible for that business. Such date slippage is common, sadly and all too often accepted as fact in published book and magazine articles. If I get motivated enough I may try to find his Holstein's details but I'm just giving broad background here.

The Frank H. Fleer Company appears to have been founded in 1885 and I assume this was around the time Fleer married Otto Holstein's daughter Pauline . Around 1897, the story that's out there indicates Fleer tried to mix a cola flavoring with chicle and by the end of the decade was one of the first companies to retail gum in vending machines. That however, was nothing compared to events of the next decade and Fleer's development of a candy coated gum called Chiclets.

Multiple sources have Frank's brother Henry inventing Chiclets in the late 1890's and this does appear to be accurate.  There is some dispute over whether Henry or Frank named the actual product but no matter, the little gum nuggets were a smash hit. Not standing still, in 1906 a bubble gum called Blibber-Blubber was developed by Fleer but apparently never marketed due to a number of deficincies. Then in 1909 Fleer sold out to the Sen-Sen Company, which was buying up confectioners and would in turn be snapped up by American Chicle in 1913 or '14 but was allowed to retain his name and right to manufacture any products not produced by American Chicle.So Fleer then started anew with the Frank. H. Fleer Corporation, of Philadelphia and primarily manufactured candy, before he retired and handed to company over to his son-in-law Gilbert Mustin. 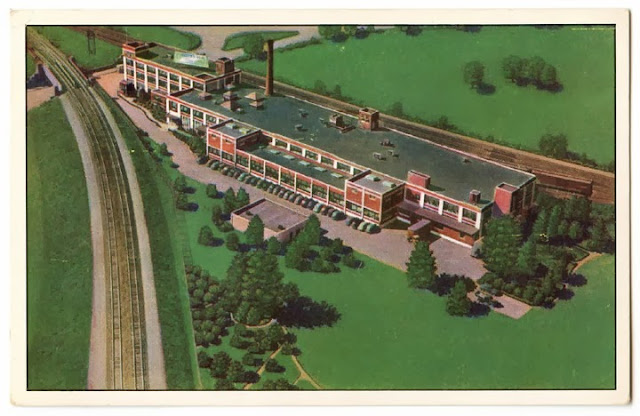 You may be interested in this little piece about Chiclets: http://www.professorwalter.com/2010/05/the-strange-story-of-chiclets-in-the-united-states.html and the man who was responsible for the introduction of chicle to the United States.

Fleer died of a stroke on Hallowe'en 1921, at his country estate in Thomasville, North Carolina.  His company lived on though and in 1923 issued their first baseball cards, although they were from a pooled series of strip cards (ACC# W515-1) and Fleer just slapped an ad onto the reverse of these.  There is some good information on the cards here.

In 1928 a Fleer employee, Walter Diemer, an accountant with no background in chemistry hit upon the right formula after years of trial and error and came up with what we now recognize as bubble gum.  Allegedly colored pink as it was the only food dye handy at the time, the product tested well and full scale production began in earnest.  Named Dubble Bubble, Diemer, who had to show the company salesmen how to blow bubbles, declined to take out a patent on his invention in fear of having to describe his process and ingredients to Fleer's competitors and a host of bubble gum companies sprang forth. Fleer even produced a series of trading cards called Cops and Robbers (ACC# R36) in the mid 1930's. You can see some background on this set here.

The disruption of World War 2 followed the 1937-38 "Recession within the Depression" and by the time Fleer and its rivals (Topps Chewing Gum now among them) were able to get access to their pre-war ingredients Gilbert Mustin had died (in 1948) and ownership of the company transferred to one Norman P. Hutson.  Following his tenure, the reins passed to Frank Fleer's grandson, Gilbert Mustin Jr in 1959.  Fleer did not produce any trading cards at the time but the junior Mustin would rectify that by the end of the year.

Seeing the prodigious sales being racked up Topps as the baby boomers were cresting into a wave of bubble gum blowing adolescents, Fleer then did three things in 1959.  First they signed Ted Williams to an exclusive contract, stealing him away from the Topps stable and then marketing a 80 card set (mostly with bubble gum) featuring his life story.

Second, although Topps had been steadily refining their contractual language and extending the periods of exclusivity following their defeat of Bowman in 1956 Fleer, with the Williams set to tide them over, took a tactic from the Topps playbook and started aggressively going after the contractual rights of various baseball players, signing them to non-exclusive contracts. We'll return to this in a minute.

The third thing that Fleer did in 1959 was to produce two series of non-sports cards.  One of these, Indian trading cards, was nothing really special but the other, The 3 Stooges, required a licensing deal and that would certainly have caught the attention of Topps.  It also sold like crazy.

By the time of the Federal Trade Commission hearings (initiated by a complaint made by Fleer) that delved into Topp's competitive practices of the early 1960's, Fleer had over four thousand major and minor league baseball players under contract, compared to 4,500 or so for Topps, which also had the most exclusive deals by far. In the never-ending battle to win over ballplayers, Topps even entered into legal arrangements with the trainers of the major league teams to try and gain influence.  For their part, Fleer paid the ballplayers extra if they provided a copy of their Topps contract and commenced an "educational" campaign aimed at the ball players that told of Topps anti-competitive contracts; this was effectively a targeted smear campaign.

Fleer was bullying their way into the lucrative baseball (and football) card market, just as Topps had done in 1951. They issued "old time" sets from 1960-62 featuring retired players in black and white photographs, all the while steadily increasing their market share. Fleer also took advantage of the startup American Football league in 1960 by issuing a set of cards (and the first modern inserts) and dabbled with a Casper set.  Topps held the NFL license (negotiated with the league and not the players) but in 1961 Fleer managed to score a partial victory with their combined NFL/AFL set. Topps also issued a combined set that year but Fleer and Topps returned to their respective AFL and NFL exclusivity in 1962 and '63. A 1961-62 Fleer Basketball set also was produced but did not compete against Topps, which had found out in 1957-58 that basketball was not yet worth the effort, a result Fleer also experienced.

The big blow though was the 1963 Fleer Baseball set. An initial series of 66 cards was issued (with a cookie) before Topps was able to halt any further series but the company from Philadelphia had shown Topps they were serious. However, things slow down for Fleer around 1964 and Fleer and Topps both were losers when Philadelphia Gum landed the NFL license (Topps retained the AFL) and Fleer generally became sporadic with their trading card issues, possibly due to mounting legal costs.

Topps then was found to be engaging in anti-competitive practices when the FTC decision came down in 1965 but then bought the rights to Fleer's baseball contracts in 1966 for $395,000 (more than they had paid for Bowman a decade earlier in a deal that had included physical property).  This came after Fleer declined to accept a proposal for $600,000 from the The Major League Baseball Players Association (MLBPA) and Marvin Miller granting exclusive rights earlier in the year, although Fleer issued a 66 card set featuring a game set called All Star Match, that had a puzzle of Don Drysdale on the backs.  Spike Glidden has a lot of information on this set over at his blog but here are a few examples of this seldom-seen set: 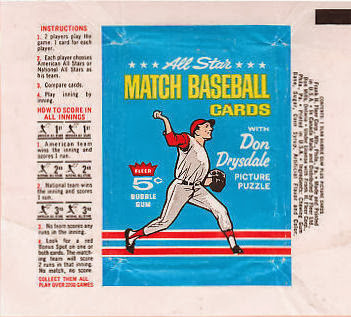 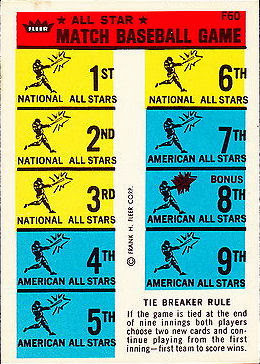 Here is a full 132 card sheet with two uncut Drysdale puzzles on the back, from Spike's blog: 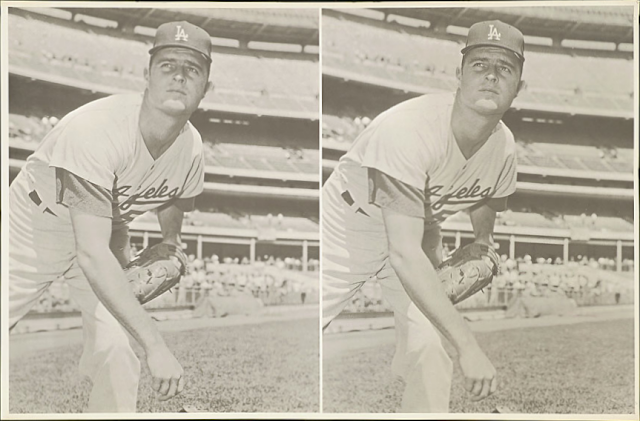 This little set may have been the impetus for the start of the great Topps test issues that commenced the same year as it allowed the purchasers to play a game of baseball with the cards. Remember, Topps would only spend money to expand market share or to defend against a perceived threat and never just added products for the sake of it at the time. Just as they had done six years earlier with the football inserts, Fleer had a little something extra to offer and Topps responded.

Fleer made some half-hearted attempts in the late 60's and early 70's to re-enter the baseball card market and attempted a large-format set in 1974, which ultimately and in conjunction with the threat from a Lifesavers brand called Bubble Yum, led to the rather lengthy series of lawsuits that culminated in the great 1981 baseball card explosion. They had a long run of baseball cartoon cards commencing in 1968-69 that ran through the 1970's and were reasonably successful as well.  For the most part Fleer otherwise relied upon non-sports cards (mostly funny car or auto racing related) for their trading card sets, plus an annual "In Action" series of football cards.

After more than a decade of immense growth in the baseball card marketplace and the launch of NBA cards in 1986 and NFL cards by the end of the decade, the Mustin family accepted a buyout from Donruss (led by a former Fleer executive) in 1989 for a whopping $75 million.  The new company went public in 1990 and then was merged into Marvel Entertainment Group (MEG) in 1992 as a transformative change among the old school entertainment and media companies took hold, fueled by venture capitalists, easy credit and "merger mania".

In 1994 MEG acquired Panini and SkyBox was added to the fold a year later at which time the Fleer plant in the Olney section of Philadelphia was shuttered. Alex and Randy Grass (who made Rite Aid the massive company it is today) then bought Fleer/SkyBox/Panini in 1999 after Marvel Entertainment went bankrupt but the bubble finally burst (sorry) and in 2005 an auction of remaining assets resulted in Upper Deck acquiring what remained of Fleer for just over $6 Million.

All of this is a rather lengthy way for me to find an excuse to post some shots of the old Fleer Factory and grounds, provided by BFF o'the Archive Jeff Shepherd. As you can see, an auto repair shop took over the old factory in Philadelphia: 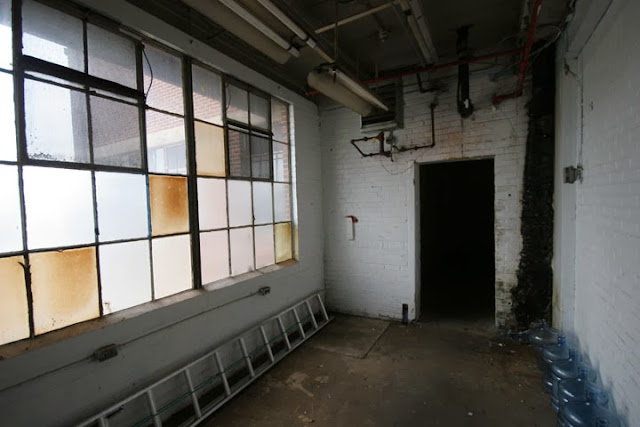 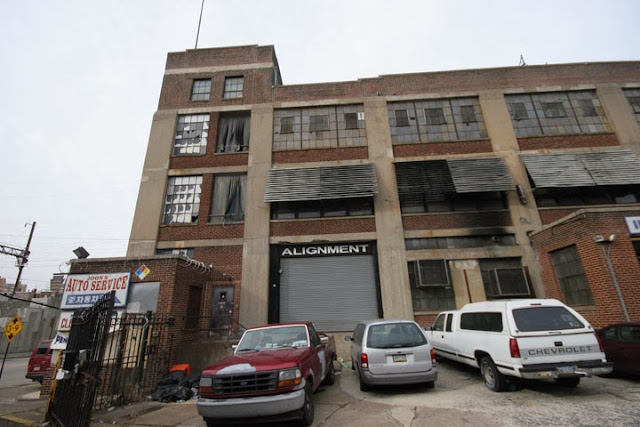 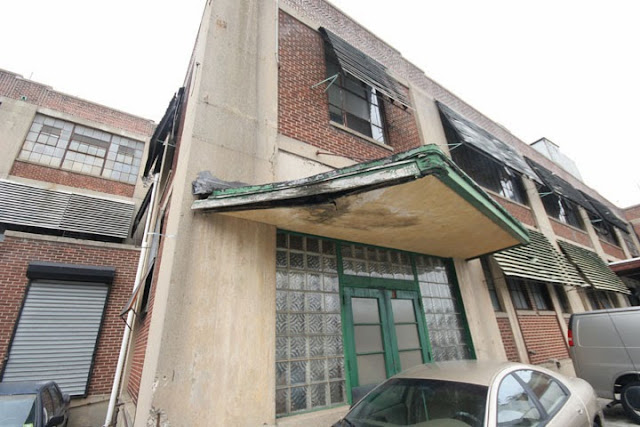 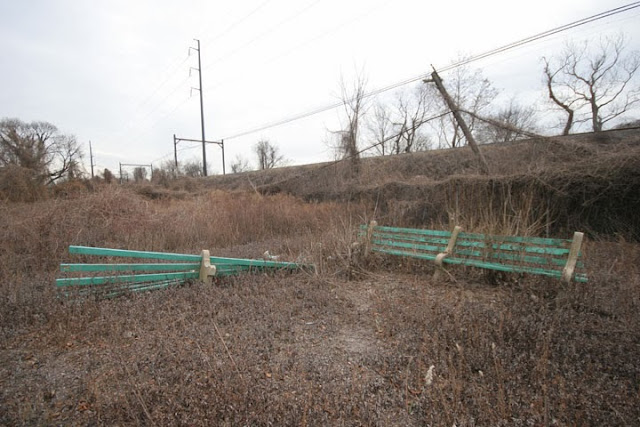 A sad but typical end to an old school production floor of the era.

Email ThisBlogThis!Share to TwitterShare to FacebookShare to Pinterest
Labels: Fleer

When I live in Philadelphia a couple of years ago, when I took the train back to Fern Rock in Philly, I always looked out the window to catch the name Fleer which still could be seen on the outside of the building.

Fleer Formula was great the ( Original ) Ex Canadian now Tootsie formula is AWFUL , Some company should REBOOT FLEER FORMULA DOUBLE BUBBLE GUM ...the soft pink texture and flavor are a favorite of America’for over 70 years