Warm Thoughts On A Cold Day

Well it's about a bazillion below zero outside as I type this post here at the Main Topps Archive Research Complex and my thoughts have turned to a warmer place, namely Mexico.

Past posts here on Topps activities in Mexico have focused on the four known sets issued in 1977: US Football, Charlie's Angels, Star Wars and Six Million Dollar Man.  While the last of those carries a 1974 copyright, (and was a 1974 US issue)  I believe it to be of 1977 vintage in the Mexican market as well, or at least within a few months either way.   I've located some scans and information that build on previous posts (here and here) and it's definitely a good day to revisit Mexico.

Let's start with the '77 US Football.  A retail box was recently offered on eBay and some excellent scans were provided that yield some good manufacturing information.  The box mirrors the US issue graphically: 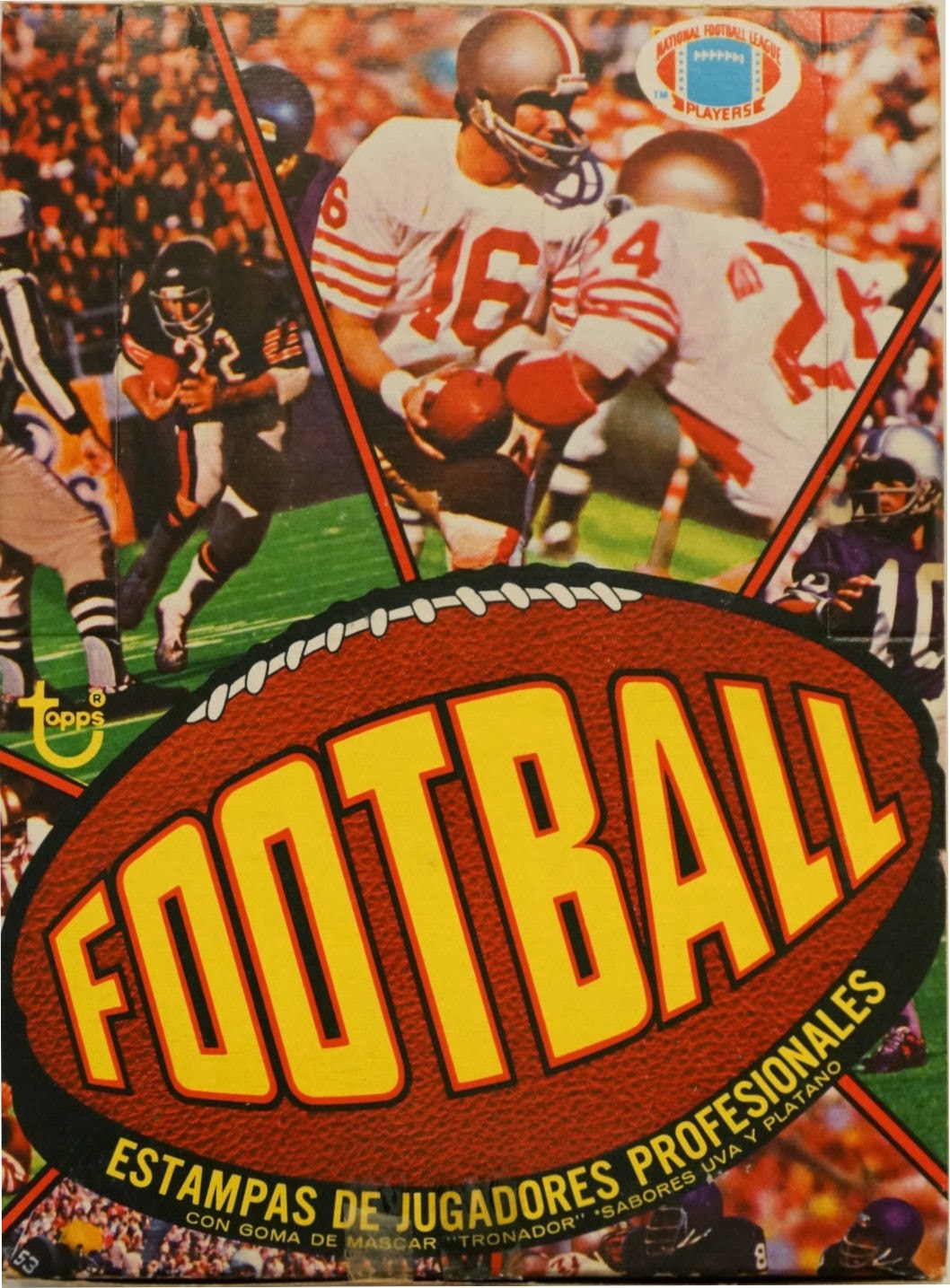 To avoid confusion you will see the little graphic in the upper right that states "American Football League Players". The back is a goldmine of information 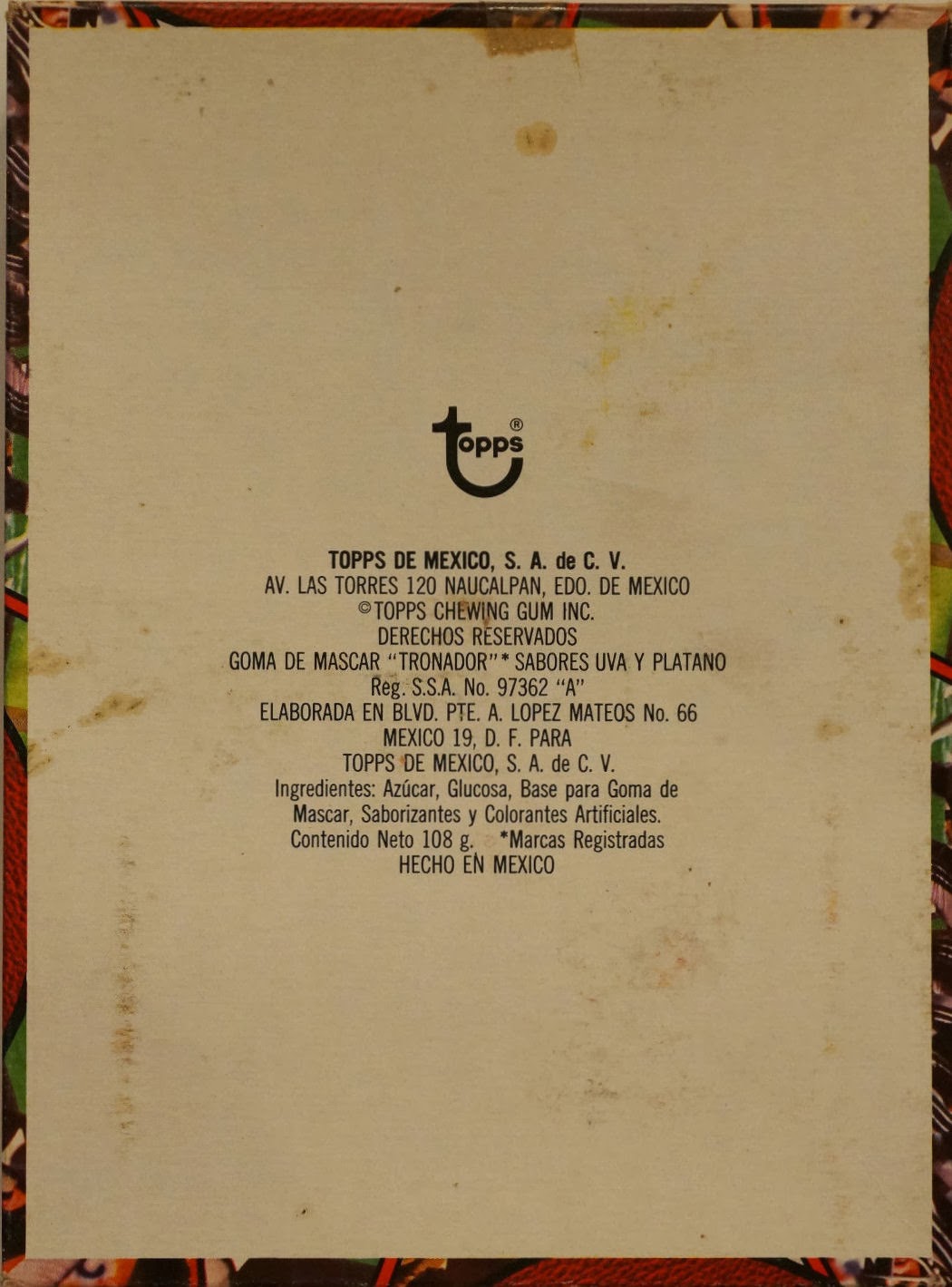 As we shall see momentarily, while the non-sports sets were licensed to a Mexican manufacturer, the Football cards were a Topps de Mexico product.  Naucalpan is just northwest of Mexico City by the way. The cards look like they were "produced" there while the gum was made in Mexico City proper, at least that's what I am getting off of Google Translate.

While Football was a full release of 528 cards the Star Wars cards only number 66 blue bordered subjects. Here's a wrapper: 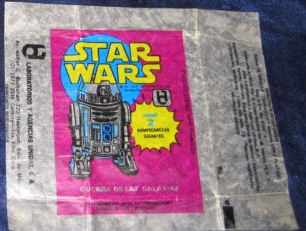 The manufacturing information along the left side of this wrapper (there are three variants, Darth Vader and C3PO also were used) shows Laboratorios y Agencias Unidas S.A., and their logo (which looks like a pop top from an aluminum can to my eyes) is an easy identifier.  S.A. stands for Societe Anonyme in case you were wondering, it's roughly the same as "Inc." or "PLC" and comes from the French originally.  In Mexico it's Sociedad Anónima.

Rather than borrowing his images, just go to Paul's vintage Star Wars page to look at much, much more on Mexican Star Wars, including images of the rare header card and packaging.

Charlie's Angels  also was produced by Laboratorios y Agencias Unidas S.A, as the logo on this unopened pack indicates: 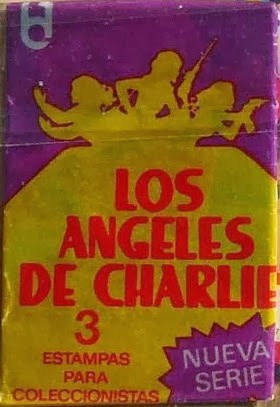 There were three cards in these packs (Star Wars had only two) and this is clearly a new series. There were four series issued in the US, with a total of 253 cards (plus 44 stickers). based upon numberings I have seen, at least three of the four series were marketed in Mexico and I suspect all four made it into the country. Star Wars and Charlie's Angels don't seem to have been issued in the loosely perforated manner that Football and Six Million Dollar Man were so I think it possible Topps de Mexico used a different printer.

Speaking of Steve Austin, Six Million Dollar Man to my mind was also a 1977 issue in Mexico as Topps presumably must have taken advantage of Mexican rebroadcasts of the show and reissued their 55 card US test issue with Spanish captions and backs: 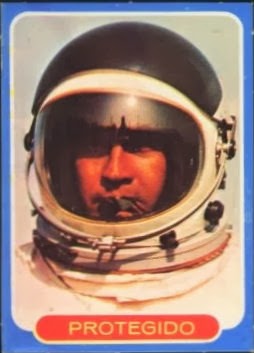 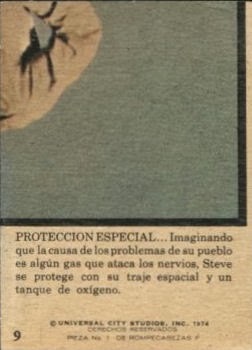 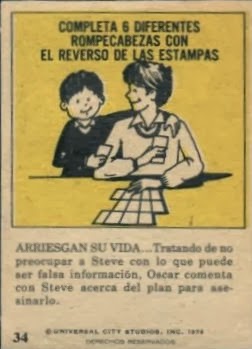 The wrapper shows this to be a Topps de Mexico production: 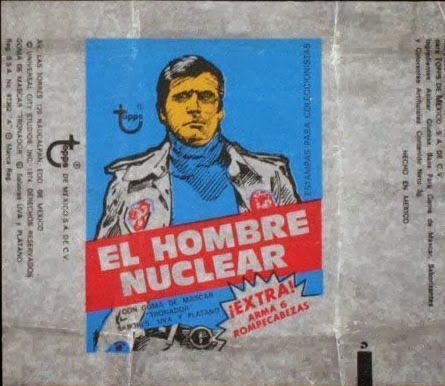 I'm not sure if Six Million Dollar Man was also issued in South America; apparently it was quite popular in some countries.  I am sure though that I want to explore more of Topps international issues this year.  They expanded into Canada in 1947 almost as soon as the war was over and by the end of the 1950's had a vast, it burgeoning international network established, so there's plenty to investigate.