It's All In The Presentation

After digesting Bowman in early 1956, Topps would ride the cresting age curve of baby boomers by cutting back on ancillary sets such as 1955's Double Header and 56's Baseball Buttons--the latter truncated as a result of said purchase--and concentrating on cranking out their regular baseball and football issues.  Simple card designs were the norm in the years following as the marketplace, devoid of any major competitors for a handful of years, was reset by Topps.

1959 though brought resistance from Fleer, who were able to snag an exclusive contract with Ted Williams and also brought out a big seller with a Three Stooges set. Topps, as usual, responded once it became clear measures had to be taken.  They added some (gorgeous) baseball and football cards to the back of their Bazooka party boxes and rapidly cranked up their PR and marketing apparatus.  The end result of the latter was the "Elect Your Favorite Rookie" campaign and the inaugural Rookie Banquet, held after the end of the baseball season.

Topps would really start bulking up their response to Fleer in 1960 and continue with a growing onslaught of extra sets and bonus inserts through 1963 before they prevailed against their Philly based baseball card issuing competitor in court and downshifted a bit in '65. During this period, yet another campaign was also waged, with Fleer offering ballplayers extra funds if they provided a copy of their Topps contract. Fleer was signing up players at a furious clip, although not under as many exclusives as Topps, at least at the major league level. Topps began firing back with their own campaign, this one primarily at more of an executive level.

The annual Rookie Banquets were one likely part of this campaign; I've written extensively about them and it's worth clicking over via the labels at right if you want to bone up. The other thing I think they did was start sending out Presentation Sets of their baseball cards every year. These went to various team executives, key ball players and other such luminaries.

Sy Berger is on record saying he gave presentation sets to Willie Mays and it would be very interesting to see what players actually got these from Topps.  Was it just superstars?  Of interest in particular in this regard, is Joe Adcock receiving a set in 1963, which was much later consigned to auction. Adcock, no longer a major name in the sport, was famously part of the 1963 Fleer set and is semi-short printed therein (replaced by a checklist, or vice-versa).  He is also in the second series of Topps that year. Coincidence?

Not very well known today, these sets were issued in five boxes annually, each with roughly 114-120 apiece inside and designated a "Limited Edition" by Topps.  Here's the breakdown by year of set lengths and how they divide out:

The boxed sets were all issued at once, like so:

It's a little hard to see but each box states "XXXXX Collectors Set 1959" with "XXXXX" being First, Second, Third, Fourth or Fifth as filled.  Here's a better shot, with one example from each year through 1962:

Here is the '63, with a couple of side views thrown in: 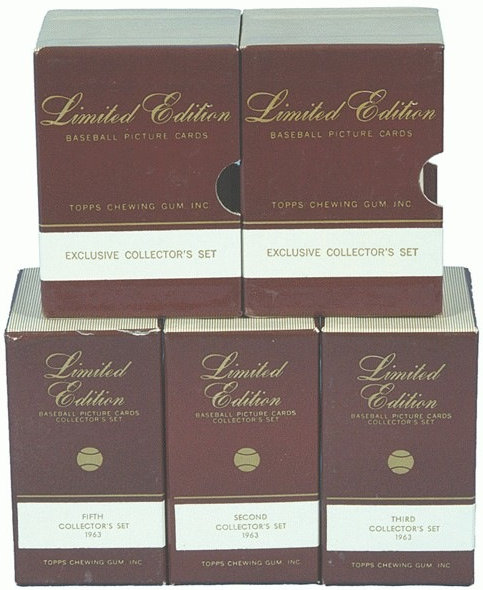 These have never been plentiful and a few sets (very few) were auctioned here and there in the 90's but most all have been broken up and only the empty boxes pop up now, and infrequently at that.  The reason these have all been pillaged is that the cards within are super high quality in general, although some pinching of the inner and outer-most cards has been noted by (lucky) prior owners.

Friend o'the Archive Don Johnson, who has seen several cards liberated from the 1962 boxes and owns a '63 presentation set, describes the presentation cards as "stunning, jawdropping......you name the adjective." He goes on to say they are "a little smaller" (more on this in a second) but also "outrageously glossy and colorful".

The smaller dimensions seem to be the result of a different cutting method being used when compared to how the "regular" cards were sliced. Anthony Nex, yet another Friend o'the Archive, describes the cuts as a "bevel" and I have seen a couple of references to this phenomenon over the years.  The end result is some of these get rejected by PSA when submitted for grading as not meeting minimum size requirements.

I have also heard the gloss referred to as being similar to the gloss found on the 1980's Topps insert "All Star" and "Rookie" sets, which would make it very noticeable indeed .

A couple of auctions have featured mailing cartons that give a glimpse as to who might have received these treasures.  Here is a 1963 set with its Topps labeled mailer, slightly blurred address-wise by Heritage Auctions: 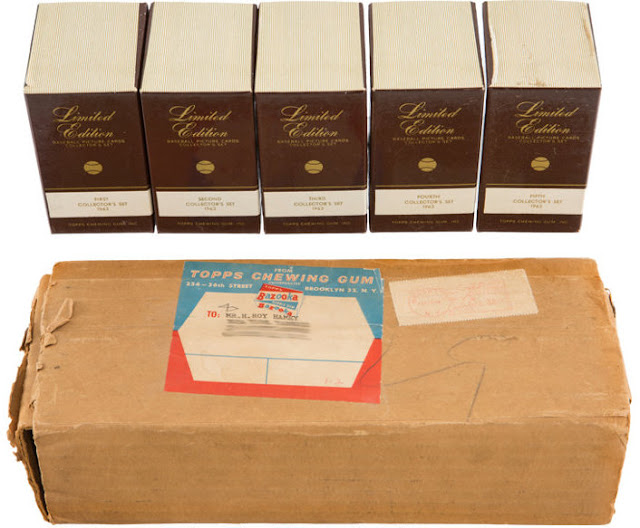 Here is a better view of the label: 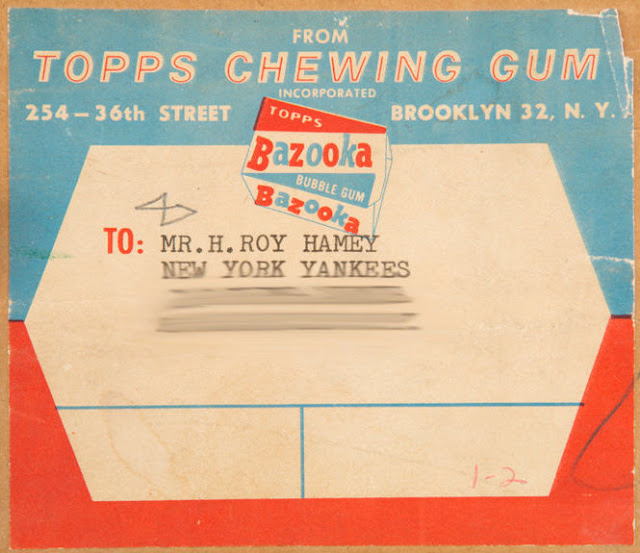 Hamey, as almost none of us will recall, served as the Yankees General Manager from 1961-63, succeeding George Weiss.

Here's another 1963 set addressed to Clarence Campbell, the President of the National Hockey League from 1946-77:

O-Pee-Chee was issuing Hockey cards in Canada at this time, using Topps supplied materials, so maybe this wasn't as big a stretch as it seems. Friends in high places.....have influence in many corners. And to answer an obvious question, I am unaware of presentation sets for any other sports.

Keith Olbermann advises he recalls the son of Irv Kaze bringing Presentation Sets from 1961-63 to work one day in the 80's.  The elder Kaze was the Angels Director of PR in those years and those sets ended up with his son. A lot of these sets probably went directly to the kiddies in the house when dad got home from work.

Some slabs from PSA and SGC identify the entombed card as being from a presentation set. Here's a 1961 Bob Friend.  You can see that despite the many superlatives one could assign to these, at least one derogatory adjective, namely "snowy", can also apply! 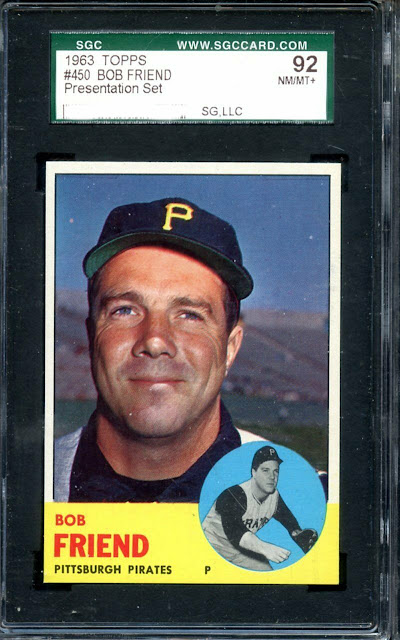 There's clearly a lot more to learn about these sets and the ways they were manufactured and distributed. If you know anything, drop me a line.
Posted by toppcat at 8:00 AM