Last September I posted an image of a 1955 Topps Baseball uncut sheet that sold on eBay.  Said sheet was recently re-hammered at Love of the Game Auctions and I have a much better image of it now.  In fact, a shot of the back was also included by LOTG owner and sometime DJ Al C. and it seems we have a bit of a mystery on our hands due to this.

Here's the front shot-I love old uncut sheets, don't you? This was the first year Topps used 110 card half sheets: 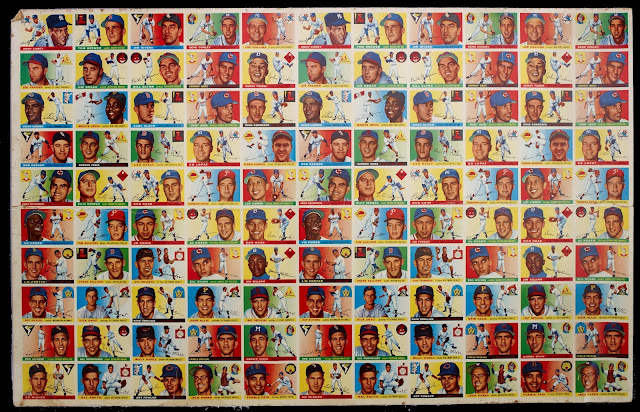 You can plainly see that there is a pattern of 50 cards running across five columns left-to-right.  This pattern repeats perfectly across the next five columns and then the fourth column gets triple print status.  The array of numbers runs from 3 through 109, so there is clearly a second sheet or half sheet that must fill in some of the missing numbers; it's an open question whether all 60 (assuming a run of 1-110) were addressed on that sheet or if there were still gaps that continued into the remaining print runs (my money is on the latter). Another uncut sheet (OK, half sheet) exists that matches the above but is clearly from another source.  In addition the above sheet and the "other" sheet both have at least one hand cut long edge.

You may (or may not) recall my post describing a while back the 40 card quadrant that the same year's uber-rare Baseball Stamps were derived from: 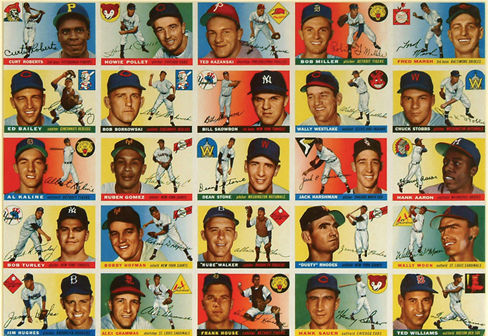 Those run from nos. 6 thru 108 and to complicate things, there is an alternate 40 card block that subs out at least two of the subjects shown above.

Robert Edward Auctions had a 110 card sheet featuring an alternate to the above quadrant in a very old (1993) auction, which I regret does not come with truly legible features: 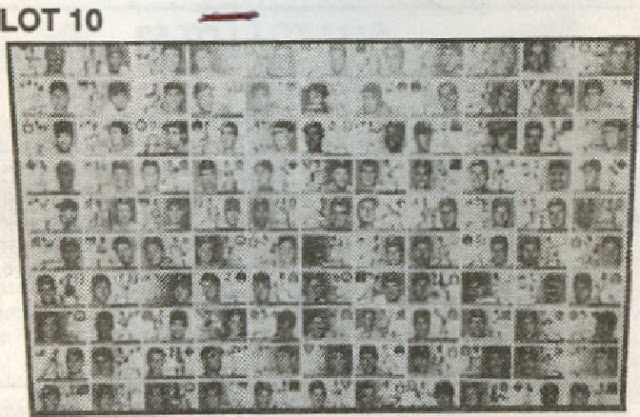 It's hard to tell but the above has 10 single printed columns and one that is double printed (the rightmost one replicates the column fifth from the left). Hank Aaron (#2) and Ted Williams (#47) can be spotted easily in those columns (third from the bottom and bottom, respectively) and I can clearly see Billy Herman (#19) near the middle of the sheet (7th column, 5th card down) and looking at it more closely thanks to that, you can see that the 6th, 7th and 8th columns repeat the  same three columns from the color LOTG sheet (which in turn replicate columns 1,2 & 3 at LOTG).  And I'm pretty sure I've seen a muddy image of a sheet with four Wally Moon's so there are shenanigans galore occurring!

It's a right mess.  In addition, take a gander at the reverse of the LOTG sheet-it's miscut compared to the front-see the line of stats across the top? 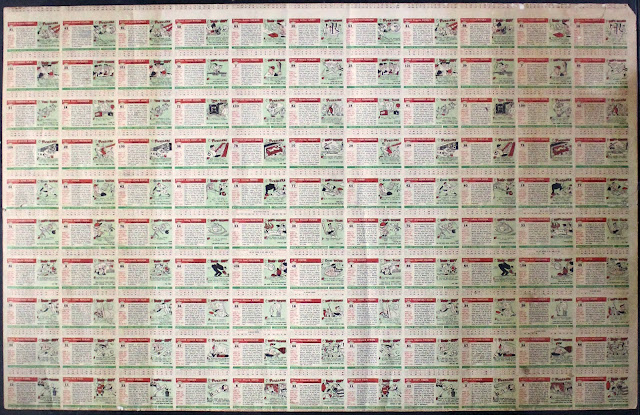 These surviving sheets are likely nearly-final proofs but usually front to back mis-alignments result in an upside down "out of phase" look to the reverse.

Let's see: a maximum of 150 cards across two 110 card half sheets would leave a balance of 60 players (not counting the four missing high numbers that were pulled by Topps) to complete a planned 210 card set but there are not 150 different subjects across the two if Herman is any kind of standard candle. Topps was stretching things out in 1955 as Bowman trotted out 320 cards by repeating certain parts of prior series on later sheets and/or they were running out sheets with open slots anticipating problems with Bowman over certain players.  I'm guessing Topps printed off four different runs, all of which were skip numbered to a degree.