Today brings a peek at a very obscure single card Topps issue that honored Bowie Kuhn, the Commissioner of Major League Baseball from 1969-84.  If you follow this blog you probably know about the card and I  made brief reference to it here previously: 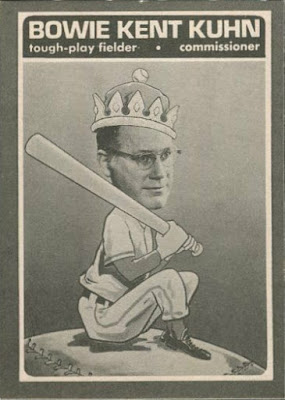 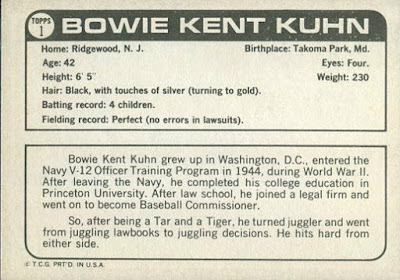 No doubt it's a Topps card...the question before us though is when it was issued.

The card has generally been attributed to 1969 (PSA's choice) and in some cases 1970.  However, a little sleuthing revealed those years are both, in fact, incorrect.

I found a blurb from the July 8, 1983 issue of Sports Collectors Digest that offered a couple of tantalizing, albeit fairly non-specific, clues: 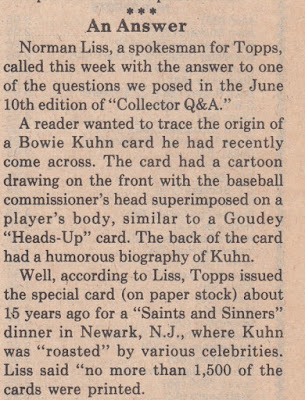 OK, seemingly vague and hopeless but if you input "Kuhn" + "Newark" + "Saints" + "Sinners" + "Dinner" into newspapers.com, you get a nice result: 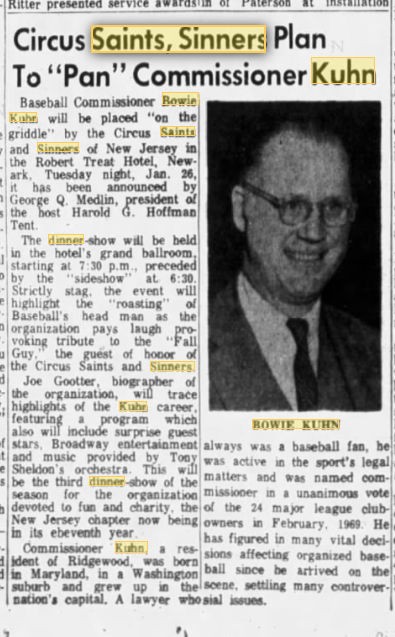 That is from The News of Paterson, New Jersey and the article was in their December 29, 1970 issue.  On January 26, 1971 Commissioner Kuhn was honored at the Robert Treat Hotel (now a Best Western) and that is indeed the date of "issue".  I've seen estimates of between 100 and 300 copies of this thin card (almost paper, really) being produced  and when I checked the capacity of the hotel's ballroom I found a maximum of 1,500.  However, it looks like the current ballroom could be a later addition to the hotel; and I suspect the 1971 version held fewer people.

No matter how big the ballroom was, these are difficult, although not impossible, to find. The date however, was not.

POST-POSTING UPDATE: MATH BEING AMONG MY LESSER SKILLS, IT HAS BEEN POINTED OUT TO ME ELSEWHERE THAT KUHN'S AGE AT THE TIME SHOWN ON THE CARD'S REVERSE PEGS THIS AT 1969 (HE WOULD HAVE TURNED 43 ON 10/28/69).  SO INSTEAD OF SOLVING A MYSTERY, I'VE GOT A NEW ONE TO DECIPHER.  I'VE LEFT THE POST INTACT AND WILL UPDATE IF NEW INFORMATION COMES ALONG. I SUSPECT THE NON-HUMOROUS PORTIONS OF THE BIO ON THE CARD BACK REFLECTS THE FACTS WHEN HE ASSUMED OFFICE ON FEBRUARY 4, 1969. IN FACT, ASSUMING THE DINNER DESCRIBED WAS ALWAYS HELD ANNUALLY IN JANUARY, THERE IS NO POSSIBLE TIME HE WAS COMMISSIONER AND 42 YEARS OLD AT THE SAME TIME.