Happy Wednesday kids!  Back at it with some midweek cheer from Friend o'the Archive Roy Carlson.

Hobby veterans are aware that Topps used to sign up almost any and all promising minor leaguers (Maury Wills excepted!) with a contract stipulating a $5 payment to retain their rights.  Famously called "Steak Money" as the idea was the player could go buy a nice steak to celebrate, I think it's possible that term is actually a neat enhancement of "Stake Money" but no matter. Today we get a peek at one of these contracts, that of Hall of Famer Ferguson Jenkins no less.

Jenkins was a Barbadian Canadian from Ontario whose mother was descended from a "passenger" on the Underground Railroad. Ferguson was a tall (6' 5") righthander who came to baseball late but clearly found his path once he started playing.  His height and inexperience relegated him to first base duties initially but his arm got noticed by Gene Dziadura, a Phillies scout who roamed the province and who would work out with the young Fergie, having him throw pitches into ever shrinking targets for accuracy, chop wood to hone his delivery and heave a heavy hammer to develop his curve.

Jenkins signed with the Phillies in 1962, although his referring Scout was apparently Tony Lucadello, who also had the distinction of recruiting Mike Schmidt. His signing caught the attention of Topps of course and he signed with them on June 22nd of that year.  Here is his steak money deal; I have never seen one of these before: 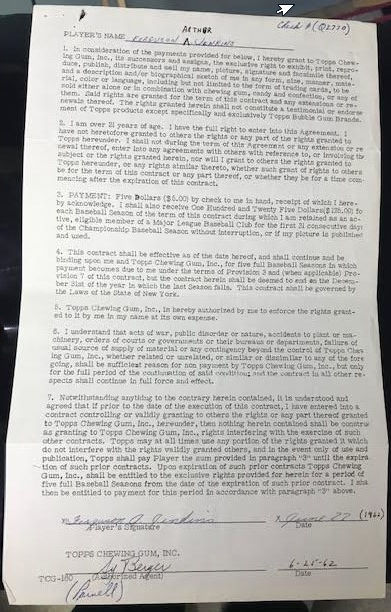 Sy Berger signed a LOT of autographs on contracts over the years.  Not sure who "Parnell" was but I can advise it is not former major leaguer Mel Parnell. Perhaps a witness?

Fergie was under 21 and needed a parental signature to make it legal though: 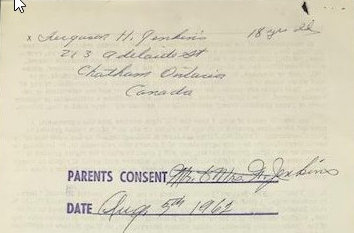 Jenkins was actually 19 at the time - LOL!

Here is the key clause in this one:

It's a little fuzzy but in addition to the $5 Jenkins would receive $125 once he had 31 consecutive days on the active roster of a major league club. This is a phrase I have seen before in Topps contracts and it's important as it partially explains why Topps often didn't issue full cards of players who were not yet major league ready.  This applied to some degree to players that had retired but like anything else with Topps there is consistency in their inconsistency.  To wit:

1) Lou Piniella: 1964 Topps card #167 (shared with Mike Brumley as Senators Rookie Stars).  Piniella did not debut until September 4, 1964, after Washington had traded him to the Orioles. I'm assuming some rookies who had "Rookie Stars" multi-player card debuts had not yet fulfilled the 31 day requirement but must have had a side agreement to allow their premature Topps debut. Fodder for another post for sure.

2) Sandy Koufax: Retired November 18, 1966.  Team Captain on the 1967 Topps Punchout cards but nowhere to be found in the 1967 regular issue.  The Punchouts seem to have been developed and produced in late 1966, before the regular issue even.

3) Mickey Mantle: Retired March 1, 1969, Topps #500 that year. Late retirement in terms of the upcoming season but still had a card that could seemingly have been pulled given the later series it was in. Possibly the customary two year contract extension from Topps allowed this.  Too bad most other stars didn't get the career summary card. Additional fodder for the future.

That bank was fairly close to Topps HQ.  They used Manufacturers Hanover for their business financing but I guess the allure of a local branch of what eventually became Citibank was too convenient for them.  Note the check was issued months before he actually signed with Topps and the "pay to" field was blank. Someone (Parnell, a secretary, Berger?) other than Jenkins (see below) looks like they filled it in. I guess Sy Berger wandered around with a pile of fungible $5 checks!

Ferguson was able to endorse his own check for deposit, although I'm puzzled how he got anywhere near Williamsport at the time. I'm not positive but it looks like the local bank stamp for deposit was done on July 13th.

So the check was cut in March, paid to Jenkins upon signing in June, cashed in July but his parent didn't sign and make it legal until August-whew!

Jenkins was traded by the Phillies to the Cubs on April 21, 1966, after appearing in seven major league games the year before and one prior to the trade.  He was sent along with John Herrnstein (a scrub essentially) and Adolfo Phillips (a useful player for several years but let go in the 1969 expansion draft) for Bob Buhl (37 years old and totally shot) and Larry Jackson (three good years for the Phils, with 41 wins but still), in one of the worst trades ever in major league history. 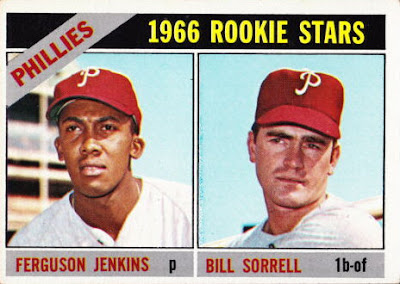 1967 gives us another look at his sig ("Fergie" now), and Shea Stadium, plus his new togs: 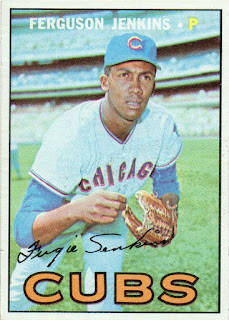 Jenkins is a guy I would see pitch a couple of times at Shea, my dad always seemed to buy tickets for games where an opposing ace would face off against Seaver or Koosman and the Mets would zip through a game in about 2 hours and 20 minutes! Sometimes we both skipped school (he was a teacher!) to go.

I saw some memorable games in the 70's as a result. I can't quite recall but I remember the Mets dropping one to Fergie 1-0 and another where I think they won in 10 but I'd need to scour Retrosheet to figure all that out.  No matter, Jenkins could pitch with the best of them and often did!