Well I'm getting closer to finishing off the Tatoo study that commenced back at the end of September but enough new material has rolled in that I am pushing that by a week or two.  This week, another two sets that were printed as "transferrables" will be under the ol' 'scope instead.

In 1964 (I think) a set of 24 Military Emblems were included in party boxes of Bazooka. These were actually issued in panels of two and are very hard to find: 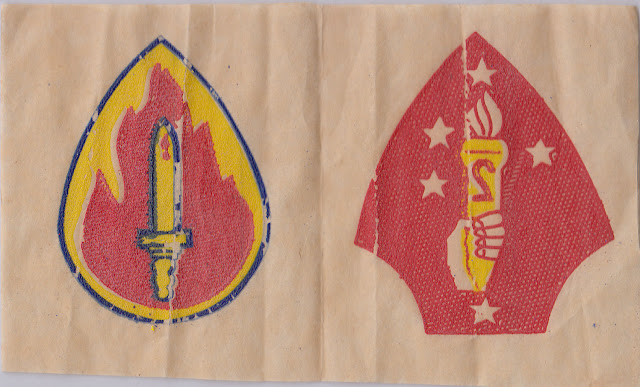 These were iron ons and they were printed on somewhat brittle paper.  If separated, they would each measure approximately 2 1/2" x 3 " but the cuts on these are horrible so any idea of precision is laughable. The emblems above are for the 63rd Army Division and 2nd Marine Division, respectively.  I am not even remotely conversant on the military regalia of the United States Armed Forces but thanks to this handy back-of-box checklist, it's easy to tell: 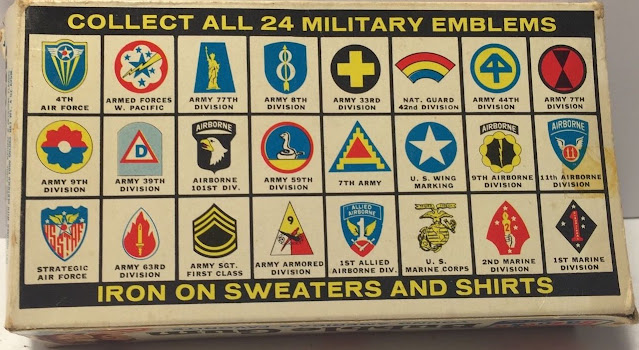 No Navy patches, which is kind of odd. I'm going to provide a matrix of this checklist, which will be needed momentarily:
A B C D E F G H
1
2
3
The 63rd Army Division emblem would then be at the B3 coordinate.
The box front looked like so.  I've got a rough dating on 1964 and am working to refine that. 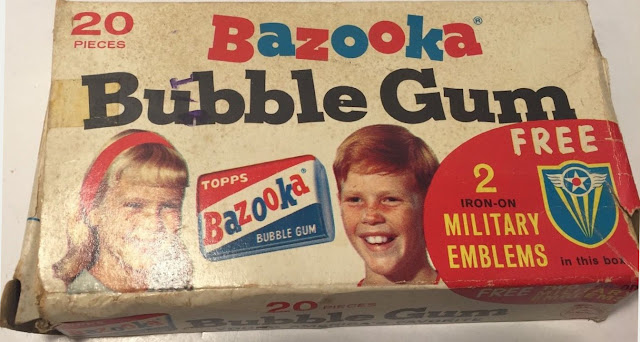 Friend o'the Archive Lonnie Cummins sent me an uncut sheet of what I thought (as did he initially) were the Bazooka emblems:

Well I was four emblems in when I realized not all of the Bazooka iron-ons were on the sheet and that there was no "topper" on those, although at first I was horrified to think my type example had been beheaded! In fact, only nine of the '64 Military Emblems were on the sheet. Using the matrix, the coordinates shook out like this: A1, B3, C1, C2, C3, E2, F3 and H2.  That left 15 and I fleetingly thought another batch of 24 might have been issued by Topps.  However, Lonnie and I apparently realized at about the same time that something was amiss and sure enough, Lonnie confirmed the sheet was actually displaying the 1965 Battle Cloth Emblems inserts.  Here's one now: 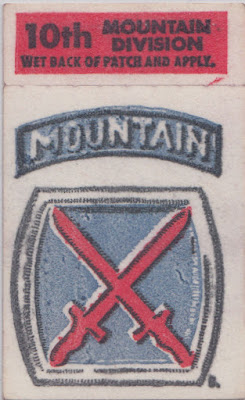 These are smaller than the Bazooka emblems and measure 2" x 3 1/4", with the topper taking up 3/4" of the real estate.  Still no Navy emblems, those Shorin's were all drafted as doughboys back in 1917-18!  As you can see these were proto-cloth stickers. Topps vacillated on self-stick vs. water-activated  stickers for several years and I suspect it was mostly due how it impacted the overall cost of a particular set, noting sometimes the self-stick ("pressure sensitive") stock wasn't always available.

Despite no relevant content-Happy Hallowe'en to you all!

Re: "Despite no relevant content-Happy Hallowe'en to you all!"

Yes, I wondered if I would find a new Halloween-related post from THE TOPPS ARCHIVES in my virtual Trick or Treat bag this season, but thanks for all your previous Halloween goodies!

- Creator of the cover article for THE WRAPPER #286