Continuing on from last week's attempt to corral and checklist the related 1948, 1949 & 1953 Tatoo issues, a fair number of original art pieces from the set have survived. These little plain ink drawings fall into four main categories:
Some if not all of these originated from the Topps Vault. The first category is not something I'll rehash too deeply here except to note that Topps assigned a number to each drawing it sold, as memorialized on the corresponding COA.  These range from #1-202 (at least) and one number repeats for unknown reasons.  I've not seen any "mirrored" images in the art proper (not that I expected to) so Topps merely copied a piece of original art to issue it a second time in altered format. Theoretically, anything that was to show properly words or numbers once the tatoo was applied would be "backwards" on the artwork.

This brings us back to the question of how many different subjects exist.  The 1948 and reissued 1949 set (slightly larger in dimension) presumably contain the same advertised 100 subjects.  I base this on the idea that when Topps reissued their 1949 Flags of All Nations/Soldiers of the World and License Plate sets a year later in a larger size, the used the same art. It gets a bit harder though with the 1953 issue ( in a larger size again than 1949's release) which was advertised as having 150 subjects. I have some thoughts on the issue dates as well, which I'll get into in a future post.

We also have other questions that arise. Did the first 100 subjects get reissued with 50 additional ones in 1953? Are mirrored subjects included in the Topps counts? Are the "official" counts believable?  Where a subject was issued in one orientation and there is corresponding line art in the opposite one, does that mean both versions are possible to find as an issued Tatoo? You can see the problems with trying to figure all of this out!

Then there is the matter of the 1981 24 Tattoos set, which reused art from these sets and others that Topps issued in the 60's, especially 1962's Monster Tatoo.  Those will be looked at next time I re-engage (I'll break this up a little for ya next week) as there is a lot of (fertile) ground to cover there.

Here is an example of an issued Tatoo and the corresponding artwork that obviously matches it. The Totem Pole is a mirrored subject as both left and right looking variants were issued.  These also show how spot color would be applied differently on each "mirror," making me think they are all included in the Topps set totals: 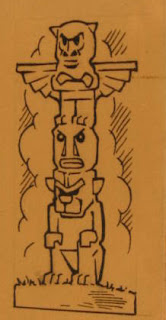 I've identified 21 pieces of original art, of which four were probably not part of the set, another that was seemingly was intended for display box or advertising art, and three or four that may have been rejected.  In addition, Chris Benjamin in his Sport-Americana Guide to the Non-Sports Cards No.2 showed 28 subjects in his overview of these sets but for most part I can't tell if they were actual Tatoos, or original art (I suspect the latter). In any event, while only a handful of the Benjamin illustrations match issued Tatoos and I will not treat them as art here as I used his "unmatched" examples in part one - I assume he knew what he was talking about!

Here's the art-with the Topps Vault numbering in brackets. Some may have been rejected, they are marked on the price with a penciled X. Others are cutouts and don't follow the pattern of rectangular artwork with lightly penciled border lines (which I don't always show in my scans). 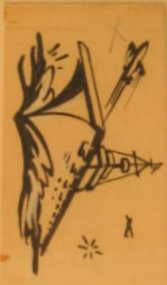 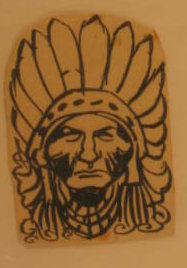 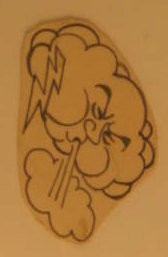 Cloud with Puffing Face (107) - Possibly not from Tatoo. Boy this one looks familiar
from somewhere else but I can't place it at present.  Any thoughts out there? 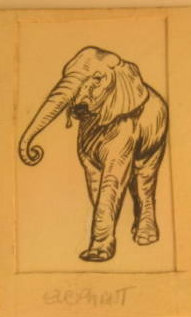 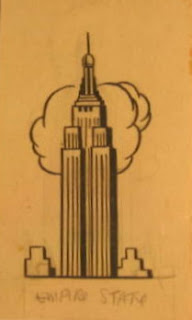 Football Punter - From BST Auctions, no number associated.
However, we get a nice glimpse of the back: 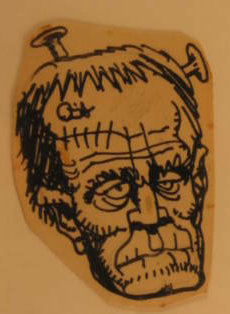 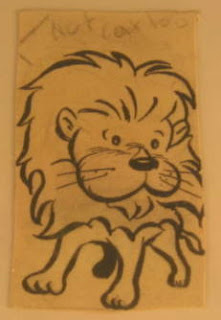 Lion Cub (115) - The pencil comment says "Not Cartoon" with
remnants of an "X" so I think this was rejected. 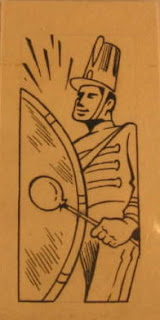 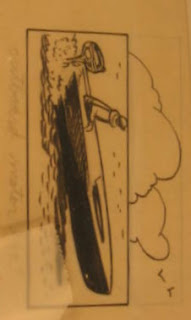 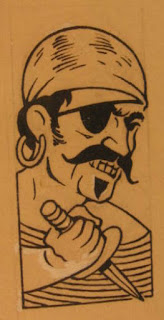 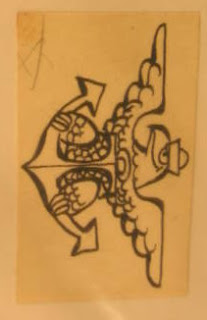 Seabird on Anchor (97) - Possibly rejected, can't tell if that's an "X" or not. This seems
like it should be a military insignia or logo but I can't quite place it.

Sedan with Chrome (86) - Not sure what's going on above it though. 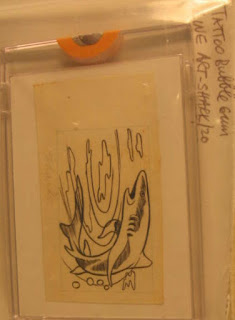 Shark (111) - Notes off to the side may not be "vintage" but these are the holders Topps Vault used. 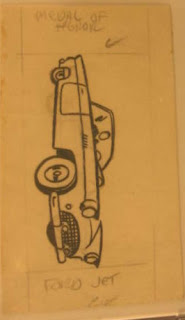 Sportscar (113) - Positioning of two other subjects seems to be penciled.
"Medal of Honor" above and "Ford Jet" below, or is the bottom one describing this drawing?

Strongman with Banner - I believe this is a drawing intended or used for display and/or advertising purposes. The pencil notes say "Solomon & Gelman - 1 neg. glossy same size" 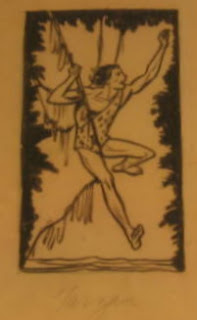 Tarzan (108) - The dark border appears unique, I wonder if this was meant for
another set?  Lightly titled in pencil, not in Woody''s hand. 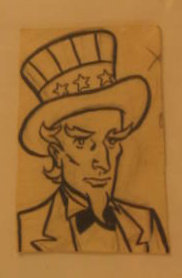 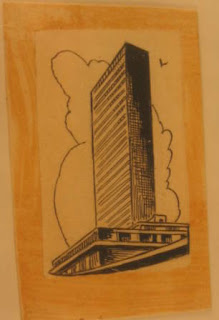 United Nations (105) - The Secretariat Building, which dominates, was not inhabited until
August of 1950, so this may have been an added "150" subject or for something else.
It's an oddity as well with the glue remnants and lack of rectangular art board. 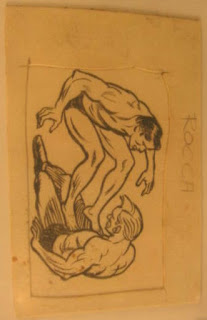 Wrestlers (114) - Pencil says "Rocca", not sure if this was intended for another set, rejected or what. It almost matches a 1955 Hocus Focus subject featuring Rocca but it's not the same image.

I think that's 12 that are Tatoo subjects, so added to the 123 other, we are at 135. Many more to come if my theory about 24 Tatoos proves out next time we meet a couple of weeks hence (taking a brief Tatoo break).
Posted by toppcat at 8:00 AM