The Organization Men (and Women)

Friend o'the Archive Keith Olbermann sent along a really neat Topps item recently and I think you'll all agree it's one of the more amazing pieces to be discussed here. I've previously shown an example of Topps Jamboree, a newsletter designed for the wholesalers and jobbers Topps relied upon to distribute their products but this particular item seems geared to the far-flung Topps salesmen around the US.  I'll get into dating in a minute but let's gawk at this wonderful piece first.

Here's a nice shot of Topps HQ in Brooklyn and a letter from Sales Manager Hugh Spencer to kick things off: 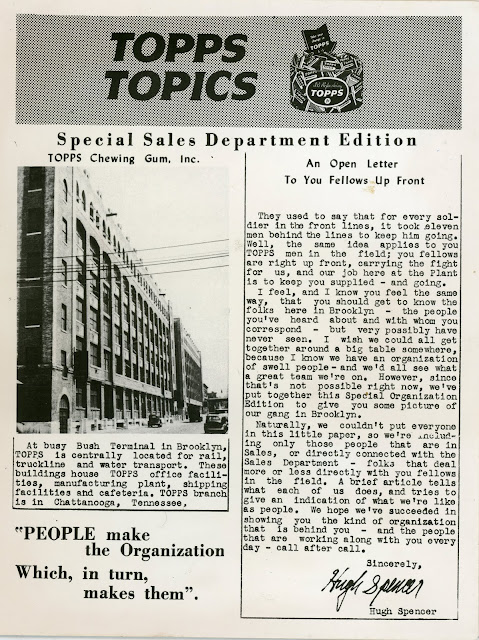 I can't find a good reference to John Dromey, at least the one who would have written the below piece but he wrote for an industry trade magazine called International Confectioner and that's where this story originated, in a longer form: 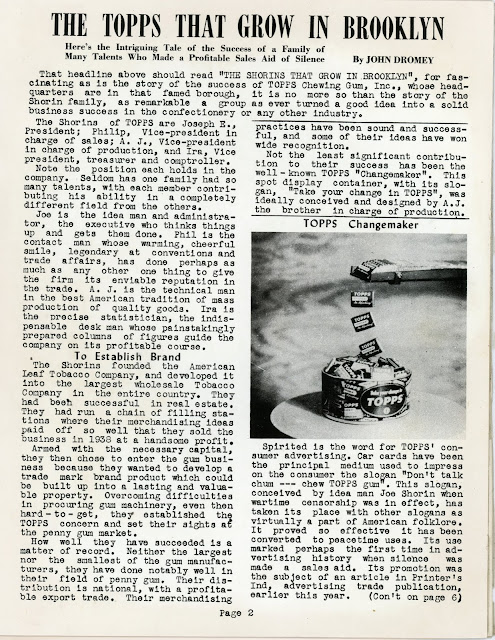 Take Mr. Dromey's exhortations with a grain of salt in places.  I'm not sure about the American Leaf Tobacco Company (ALTC) being the largest wholesale tobacco company in the US but they did have an impressive presence nationwide, or at least east of the Mississippi River.  Their scale is hard to measure though as so little is available on the company. The "Profitable Sales Aid of Silence" tagline though is 100% accurate-it's how the Shorin's operated for decades, i.e. letting their products do the talking.
The referenced real estate venture had at least one very major hiccup in 1933, when the building housing the ALTC (and apartments on the upper floors), a joint venture of their father's with another family (the Rabkin's), went bust and 7 Debevoise St. was foreclosed upon. This act makes the comments about ALTC reasonably suspect to my mind as well, although prior to the Depression things may have been quite rosy in both empires.
The filling stations though, which went by the American Gas Stations (AGS) moniker, are much more quantifiable. They certainly were doing well enough to get bought out by the Standard Oil Co. of New York (Socony) or what we would now call Mobil, in 1938, although latter day family accounts and those of others differ on just how well things were going.
A 1939-40 New York City tax photo documents one such station; all seem to have been located in Brooklyn  although I have a recent report of one possibly being in Queens.  This may be one of the few photos showing the operation as any other tax photos I could find showed the switch to Socony Sobol Brothers) had already occurred. AGS sold Socony products so the oil major must have had a pretty good idea of what they were buying.  Around fifteen AGS station existed at their peak.
Similar chains around New York City (such as Sobol Brothers), were also being gobbled up at this time by much larger companies. AGS should not be confused with the American Oil Company (AMOCO), which was originally a brand of Standard Oil's but got trust-busted into an independent in 1911.  They later re-associated though and both Standard and AMOCO stations co-existed for many years before various mergers somewhat reunited them. The AGS stations were rebranded as Socony's Sobol's after the deal closed (Mobil had bought them too!) and I'd imagine would have been filtered down to Mobil stations eventually. One location was still active (as a BP IIRC) until five or six years ago and one or two others may still be service stations.
The "American" theme, which featured red, white and blue prominently, would be reflected in Bazooka's livery once the product was launched in 1947. 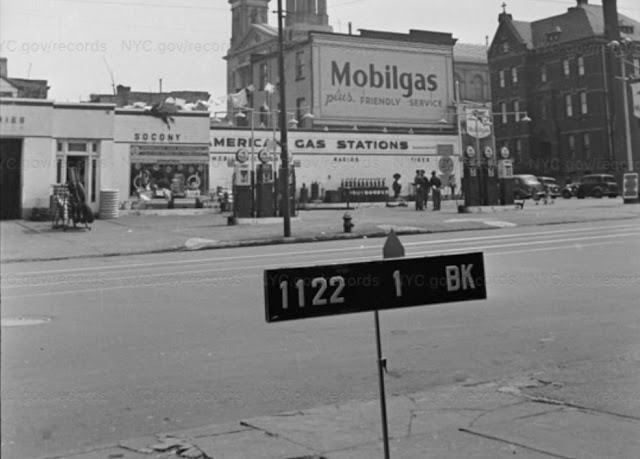 Now we get to some Shorin's.  I think I've only seen one other picture of Ira and maybe two of Abram over the years. Joe looks like Joe and Phil looks like a super-villain! 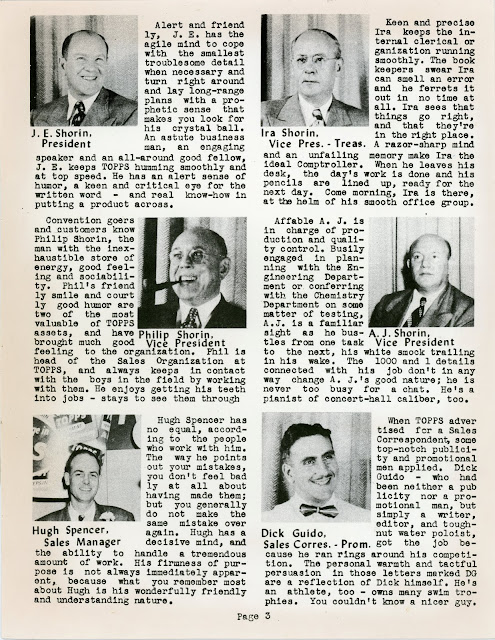 We see some offspring next.  Joel Shorin would end up as President of Topps and Phil Shorin's role must have been expanded at some point (I'm not as up to speed on the third generation as I am on the original nuclear families). Check out young Sy Berger! 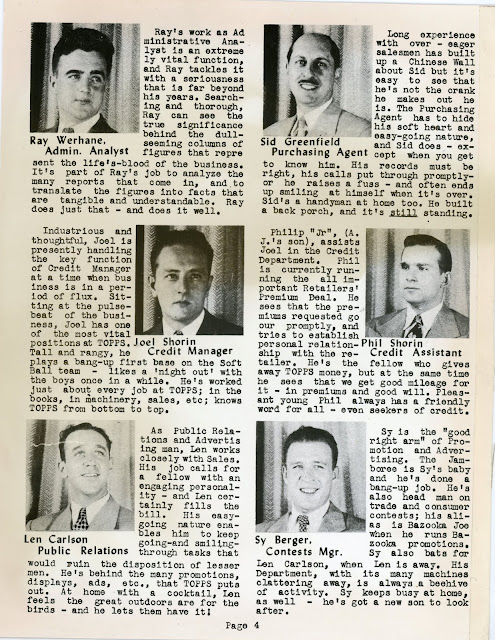 The references in Berger's bio lead me to think this newsletter is from the second half of 1948 as I believe his first son was born earlier that year and the other jobs described match up with that dating. Eddie Shookoff's son gave me a valuable interview for my book and I believe Mel Bohrer was a car pool buddy of Woody Gelman and Sy Berger's for many years. I suspect Phil Jr. and Sy also interacted quite a bit as Berger had some involvement in procuring premiums from Japan after the war. Charles Zubrin also featured prominently for decades at Topps. 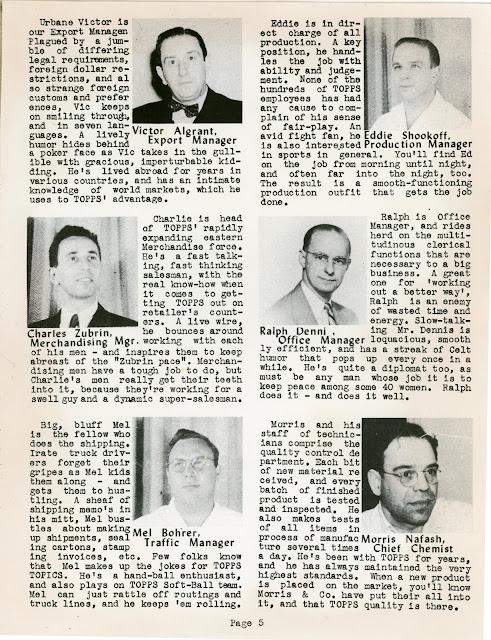 I want to match up some of the initials of the secretaries below to some Topps correspondence I have but it's a back burner item: 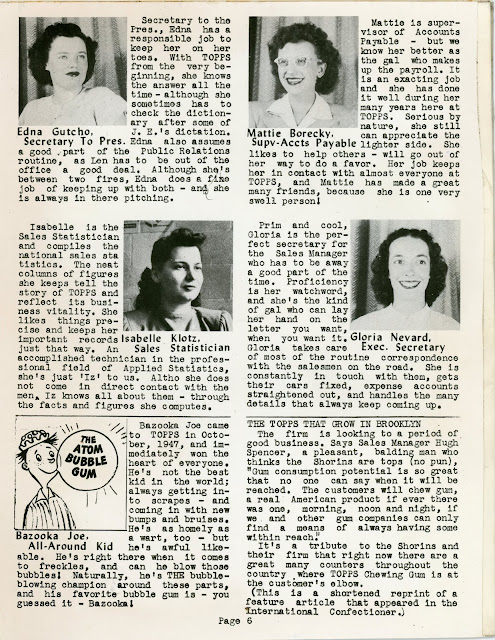 As the "Changemaker" is still front and center and with no reference at the end to the penny tab version of Bazooka (that being a mid-1949 effort), I think my latter part of 1948 date estimate stands up pretty well.

These "house organs" are hard to find and I have no idea how long this publication ran. I'd love to find more copies of this one and Topps Jamboree.

Terrific details in that newsletter! The fact they mention Sales Correspondent Dick Guido as a top swimmer made me think he'd be findable online. Indeed, it appears Dick Guido continued competitive swimming into his late 80s.

And love that bowtie.

found this page by searching for shorin & topps - my father Heyo Beentje worked for Topps in the 60s as European sales director, and names like Eddie Shorin, Charles Zubrin and Joe Hauser still stick in my mind from those days. I loved browsing the samples stored in our garage, Topps Civil War cards and the like, and the taste of Bazooka is still a vivid memory sixty years later!