A funny thing has happened in the quest to determine the print array of the 42 cards in the 1970 Super Baseball set. As noted here previously, the two sides (or slits) of the press sheets total 126 cards, which seemingly would allow for three full sets of 42 to be printed but, as we well know, this was not the case.

Now, last year's attempt to fill out the arrays with the able assistance of Friend o'the Archive John Moran, seemingly leaving 14 (7x2) open slots across two columns at the extreme left of Slit A has come into question despite credible evidence our original reasoning was essentially correct. 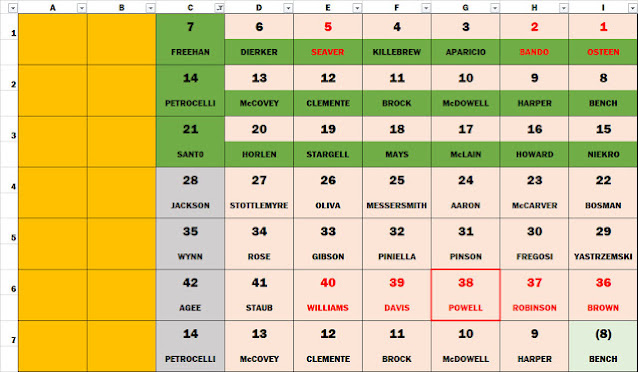 You can ignore all the different colors and shadings really, they were just how John and I tracked our sources and progress piecing the slits together. John and I speculated last time out as to how the two empty columns could fill out, with each of us having our own theories.  We did however, agree that these three pairings in the mustard colored columns would exist:

Note how the A slit always descends laterally to the right. We also agreed it was a mortal lock that Clemente and McCovey, with white areas above them, would be at the top of the columns.  Check out the strip of white above both but especially Clemente on these examples: 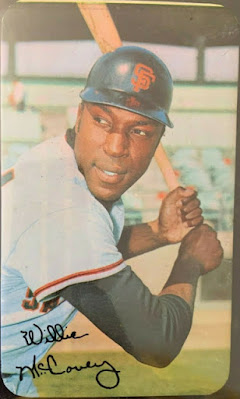 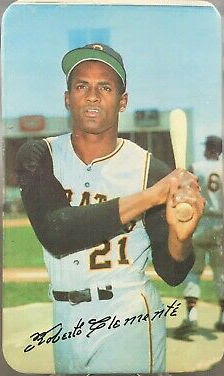 Pretty definitive they are at the top, right?  Wrong, as a recently auctioned proof sheet from Heritage has yielded a quite unexpected result: 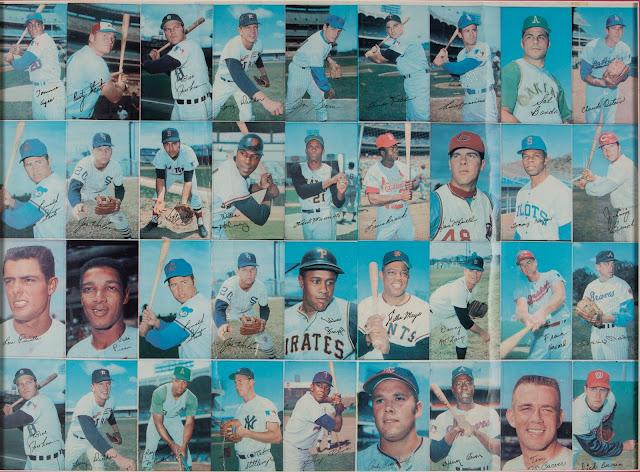 These are theoretically the four topmost rows of the A slit and you can plainly see McCovey and Clemente are not where they should be (or there at all).  In fact, we get two cards thought to be short prints in Agee (#42) and Staub (#41) now appearing with three impressions apiece but in a vulnerable area of the sheet that might explain their somewhat scarce status.  Santo (#21) and Horlen (#20) also go from two to three known impressions (they are not thought of as short prints). Pinella (#32) and Pinson (#31) go from three to four impressions and Freehan (#7) and Dierker (#6) do the two to three shuffle. All four pairs properly descend going to the right as well.

So assuming we can rely upon the proof sheet above, here's where things stand with the remianing subjects having two known impressions still (and #38 Powell remaining at one, the only such card still stuck there). Those thought to be short-printed by the hobby are designated as such:

38 Powell SP (one impression only with no correpsonding pairing)

We now seemingly have 120 of 126 impressions but why don't McCovey and Clemente appear the the tops of this sheet?! And is the Powell a true single-single print? And what do we make of this Rose (#34) from the A (left) slit that I forgot to address last year? 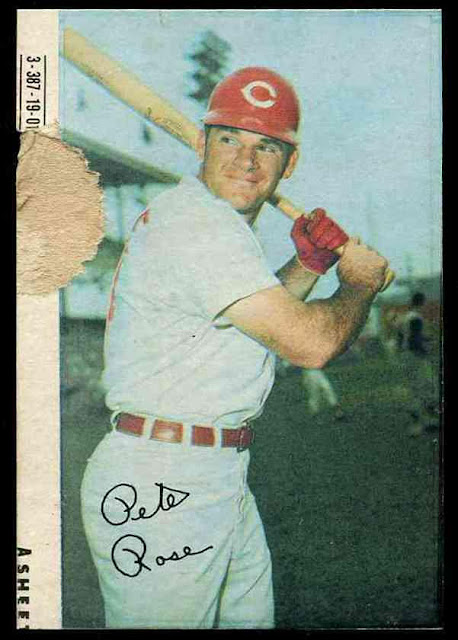 Pete, likely in the row 6 position, seems like he should be paired with Gibson (#33) as the sequence moving to the right captures the Pinella/Pinson pairing in proper order as well in that row.  That would make each a four impression player and leave only four slots left to fit. Perhaps it goes:

Powell (#38) and Stargell (#19)-an"unmatched" pair, with Boog in the problematic lower left corner. That gets him to two impressions (I can't believe there's not two) and Stargell is not a perceived short print either, which works.  It also leaves the rest of the short prints at 2 impressions, whcih makes a ton of sense.

Well, just as many questions as answers it seems still!  My current thinking is the "new" proof sheet was rearranged for final printing but it's quite odd the McCovey/Clemente pairing is not atop it.