An interesting Sy Berger letter, in more ways than one, floated into my possession last week courtesy of a Friend o'the Archive and mine.  Feast your eyes on this wonderful missive: 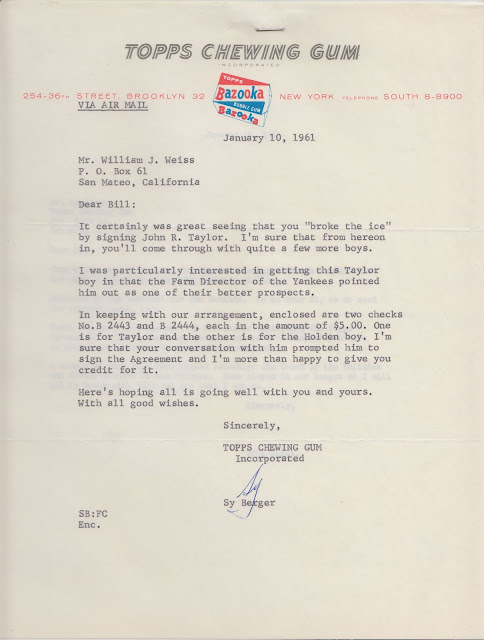 Mr. William J. Weiss turns out to have been the official statistician for the Pacific Coast League starting in 1950 and held that position for 31 years!  He also maintained statistics for at least eight other minor leagues at various times and is enshrined as an executive in the PCL Hall of Fame.  In 1982 he won a 1923 World Series program at auction and quickly realized that he was in possession of Baseball Hall of Fame property, which was easily determined by the procurement stamp and accession number displayed on the first page of the item in question.

Weiss contacted Cliff Kachline at the Hall of Fame and the story, as relayed by Bill James in his 1995 book Whatever Happened To The Hall of Fame, turned out to be a twisted one. The program had been on loan to the Office of the Commissioner of Major League Baseball and it eventually turned out over 400 items had been sent to the Commissioner's office in 1973 as part of a research project and never returned to the Hall. These got put away eventually when whatever projects they were needed for concluded.  At some point thereafter, when the storage situation at work got too hairy, Joe Reichler, who was Bowie Kuhn's right hand man and his Director of Public Relations to boot, "helpfully" lugged several boxes of goodies home, some of which held old World Series programs and other assorted treasures.  He kept these in his garage, until selling off some things within, none of which were his of course, to help defray his son's college tuition.

After the sordid details were outlined in some 1983 Sporting News articles, a criminal investigation was launched into the Commissioner's office by the New York State Attorney General. This seems to have spurred Kuhn into action and MLB replaced the lost items, or made restitution to allow for repurchases of the ones they couldn't retrieve. New York State subsequently dropped the investigation and a couple of the HOF's long time employees, including Kachline, ultimately got the sack.

You may also (or only) know Reichler's name from the several editions of the Baseball Encyclopedia he edited.  If I recall correctly -- and I think I do since it was my LCS at the time -- some of these purloined World Series programs ended up at the same shop where Bill Mastro once allegedly hacked off the Gretzky Wagner from part of an uncut sheet of T206 cards.

As for the contents of Sy's letter to Weiss, who looks to have been a part-time bird-dog west coast talent scout of sorts for Topps in addition to his other skills, it was to relay "steak money" to two minor league prospects. One of them, John R. Taylor, a catcher, spent 1961, which was his his first season in organized ball, in the Yankees farm system.  He initially plied his trade in Class D ball, first in  Harlan, Kentucky and then Auburn, New York where he hit a combined .151 for the year before the Yankees jettisoned him via unknown means.  He ended up in the Phillies system in 1962, where he managed a whopping .175 average for another Class D team in the Alabama-Florida League and was not seen again. I'm guessing, without too much effort, that he was in the "good field-no hit" category. His biggest claim to fame was possibly (I can't determine if they overlapped) being a teammate of Mel Stottlemyre's in Harlan for a spell.

I think the other guy was Richard Holden, a pitcher who spent 1961 in C and B ball as a Braves farmhand and eventually, albeit briefly, made it to AAA in '62 as member of the Giants organization before backsliding in 1963 and exiting OB.  Baseball can certainly be a cruel game.