Time-travel Saturday kids as we revisit the late 40's and early 50's!

Topps, in their primordial bubble gum days, planted four comic sets inside of their early one cent Bazooka wrappers: Spalding Sports Show (by Willard Mullin), Historical Almanac (finally properly named after all these years and previously mid-identified as not only Famous Events but also This Date In History), Know Your Sports and Famous Events. Thanks to a recent Love of the Game Auction (hi Al!) and a bit of additonal research, I've been able to determine that the Mullin set and Historical Almanac (which featured a calendar page showing a specific date in history) were printed together in 1949 and appear to be the first comics in what was then the debut of Bazooka one-cents tabs that year.  Furthermore, I now know Famous Events is not calendar-page based and seems to have been printed in 1950 along with Know Your Sports.

They're unfortunately all cut down but in order from the top: Famous Events, Know Your Sports and Spalding Sports Show, all from LOTG:

Shiny was their outside packaging: 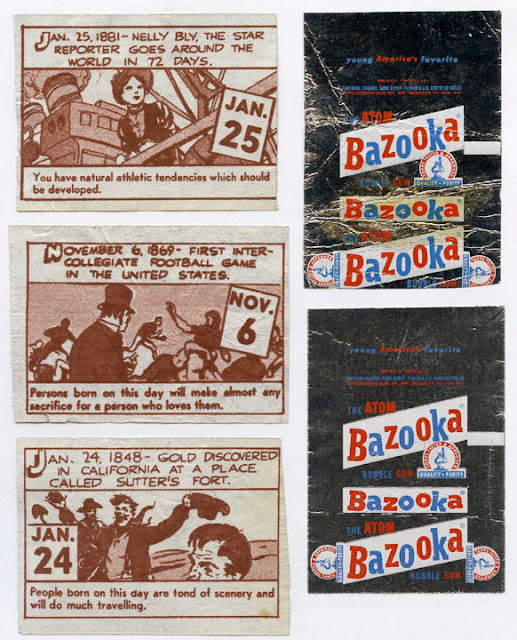 It's extremely doubtful all dates can be found and Shep says at least one repeats. None of these are easy to find, so it's all a big mystery as to how many subjects can be found from each series. The fortune on the bottom was a persistent Topps trope for many years with Bazooka comics of all sorts.

Moving into 1951 now, Friend o'the Archive Rob Lifson sent this pic along awhile back, which held penny packs of 1951 Blue Backs and came on the heels of the first series of Red Backs, which in turn were all part of the Baseball Candy set. I've never seen a box with this sticker before and Blue Backs as a whole are about twice as hard to find as Red Backs. As you can see, this was a Topps file copy as there is a stamp indicating it was to be returned to Woody Gelman. These packs actually had caramel in them and should not be confused with the Doubles packs that were reissued without candy a year later by Topps. 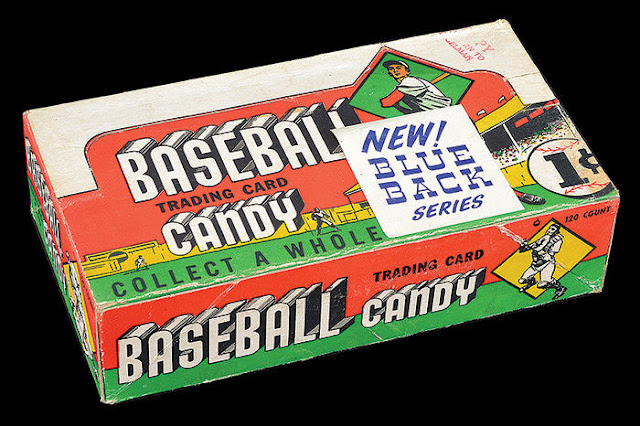 Speaking of Doubles packs, a hoard of them were found in bulk in 1983 at a Philadelphia jobber's warehouse and a large supply of them entered the hobby.  The July 8, 1983 edition of Sports Collectors Digest succinctly explained it all: 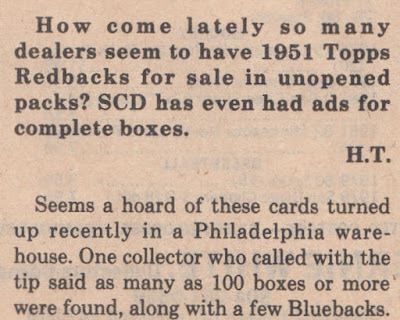 There were 120 packs per box, so roughly 12,000 packs were unearthed, mostly of Red Backs. I was lucky enough to buy a pack of these, $11 was the price if memory serves.  Still have it too and you can clearly see a Red Back lurks within: 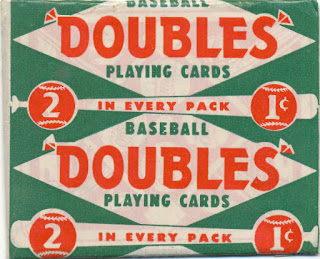 I suspect Bowman got the Baseball Candy set shut down in mid-production, or at least managed to get the distribution stopped in the Philly area, although I've never been able to prove it.  Something clearly happened to it though.
I've said it before and I'll say it again, I just love the pre-1952 history of Topps as it's all just so unpredictable!
Posted by toppcat at 8:00 AM