The Team That Topps Forgot

(This first appeared about fifteen years ago in a somewhat different format, in a zine called “For lectors Only”) Hi Unk Phil!

Back in the days of yore (that's the 1960's folks) there once was a National League baseball team called the Houston Colt 45's. Born at the same time as the New York Mets, the Colts were definitely the NL’s poor stepson. After three rather non-descript seasons and a licensing dispute with the Colt Firearms Company, the Houston National League Baseball Club changed their name to the Astros for the1965 season. The name was chosen due to 's growing renown as an aerospace hotbed and symbolic of the nation’s then fascination with astronauts and the space race. Indeed, it is a contracted form of the word “astronaut”.

While the team played poorly and were denizens of the worst ballyard in the majors, they had one stupendous logo. The 63’s and 64’s have the best shots of it. You can see the cap with the 45’s logo on Bob Bruce’s coconut and Dave Giusti has one of the best views on the uni front of the Colts name wafting out the barrel of a revolver that I can find in my collection. The ’64 also shows him sporting the smoking gun that was soon to disappear. 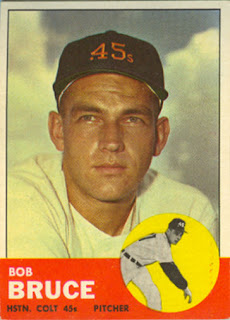 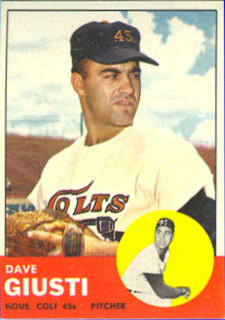 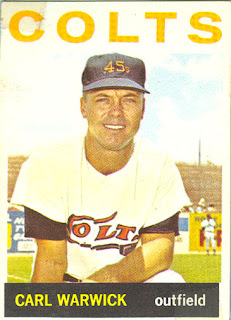 Chris Creamer’s sportslogos.net has some more.

Jump ahead another three years to March, 1968 and picture yourself as a ten year old Astros fan about to open your first pack of Topps baseball cards for the season. You open the bright yellow wax wrapper and the smell of bubblegum fills your nostrils. Delicately, after popping the pink slab in your mouth and savoring the sweet yet chalky taste of the gum, you examine the five cards in your hands. Right away you notice they look kind of strange, sort of like a burlap sack. But you don't mind; because they are the first cards of the spring, because you are young, because spring training started last week and the newspapers are filled with baseball stories.

Gil Hodges is staring you right in the face, his dour look making him look like your gym teacher. You hit gold on the next piece of cardboard-Willie Mays! What incredible luck for your first pack! Your heart beats a little faster as you flip Willie over to reveal Denny McLain. You are really cruising. Denny gives way to Julio Gotay, and okay he's only an infielder, but he's an Astro and you feel this is the most incredible pack of cards you have ever opened in your life. You slide Julio over to reveal Tom Tresh, but something is wrong! You back up to Gil Hodges and run through the team names: Mets, Giants, Tigers, , Yankees. ? Why not Astros? What's going on here? And then you forget all about it. After all, it's springtime and you're ten years old.

So what happened back in 1968? Well, the word Astros did not appear on the front of a Topps baseball card, that's for sure (I know, I looked-but only at the fronts!). There wasn't an Astros cap, patch or uniform to be seen. From card number 21, Ron Davis, all the way through number 592, John Bateman, there is not one shred of evidence indicating the team's name was the Astros. What could have caused such a situation?

The roots of the problem date to 1964, when there was no Colts team card in Topps annual offering. So it continued: 1965, '66, '67. Where were the Astros team cards? The only thing I can figure out is that a dispute with Colt Firearms over licensing played a part for the 1964 season. Perhaps the club was prohibited from supplying Topps with a team photo. Maybe Topps refused to print one under threat of legal action from Colt Firearms. But that had never stopped Topps in the past, they would just use an old, altered one. In fact, they could have used the picture from the 1963 set, airbrushing out any logos of course, but they didn't.

Once the team name was changed in 1965, any current licensing problems with the Colt Firearms Company would have been moot. The individual player cards mostly said Astros, so things were essentially fine at Topps since they signed players to individual contracts, right? Well, they ended up with a hybrid of “” and “Houston Astros” on the pennants adorning the front of the cards plus their own variant logo on the first few cards in Series 1 with some 45’s logos present as well on the caps. An Astros logo was barely interspersed among the capless in the high numbers. Given the circumstances, it appears to be a precursor to the ‘Washington Nat’l League” debacle of 1974 doesn’t it?

There were still cards of Astros players (as Astros) in '66 and '67 but no team card. And then something happened. That something was Marvin Miller.

To make a long story short, Miller forced Topps to increase their payouts to the ball players in 1968 and also to contribute a portion of their gross sales to the newly formed Major League Baseball Players Association (MLBPA). The Owners, never ones to let a nickel slide through their fingers untouched, formed their own group, Major League Baseball Promotions Corporation (MLBPC). If I understand it correctly, licensing fees had to be paid to both Associations if you wanted to picture a player with his team logo on a product. Considering how much money this licensing arrangement has netted both the players and owners over the years, I find it ludicrous Marvin Miller is not in the Baseball Hall of Fame but I digress. You're probably wondering how this ties in, aren't you?

Well, the Astros were owned by a character named Judge Roy M. Hofheinz and I originally thought he was some kind of eccentric but the evidence now points to a savvy businessman who liked to have some fun. He was an early media mogul and a force in bringing FM radio to the (hard to fathom now but after WW2 a big deal indeed) and he owned radio and later TV stations in the area. Hofheinz may have been the first person to think of playing ball under a dome but good luck proving that particular piece of hearsay. After abandoning mall development to build a domed ballpark for the city of , he also allegedly helped develop Astroturf. It may be though that he just offered to publicize it in exchange for free carpeting at the Astrodome after it opened and could not sustain natural grass. He later was a part owner of Ringling Brothers, Barnum & Bailey Circus and developed a primeval theme park in the early 1970’s called Astrodomain.

Here is some detail on the Astrodome that sums things up nicely: http://www.ballparks.com/baseball/national/astrod.htm

My current operating theory is that the Judge tried to cut his own deal outside of the MLBPC and failed. After sorting things out in '65, the '66 and '67 sets were a compromise of sorts. However, without the blessing of both the MLBPA and MLBPC for 1968 Topps likely could not use the trademarked name “Astros”. The net result of this was one of Topps all time airbrush jobs. They took Astros logos off caps, made sure only the road uniforms showed on the cards and pictured a lot of players sporting some really neat mid-sixties hair styles. There is not a trace of the Astros name on any of the thirty one cards in the 1968 Topps set. They even avoided the problem in the ’68 Deckle Proof of Dave Adlesh. 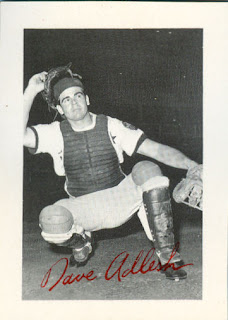 This phenomenon has also been noted on the other side of the tracks by Fleerfan:

In 1969, the problem persisted. The card fronts once again said and not a logo was to be found. Series One, Two and Three were all like this. Then all of a sudden, when the Fourth Series cards came out, the logos were back! The team name was still shown as on the rest of the cards that year for the sake of continuity. but the logo was visible on most cards. Except for a high number card of Harry Walker, which features an obviously airbrushed cap, it appears no additional effort was made by Topps to conceal the fact that 's entry in the National League was known as the Astros. No team cards were issued in 1969, but after seven years, the 1970 set had a Houston Astros team card in it.

Topps has done some pretty strange things over the years, but to me the team that Topps forgot is among the strangest.

Great article. Your theory about Judge Roy M. Hofheinz makes a lot of sense. Perhaps because of the issues he had with Colt Firearms which forced him to change the team's name he was very protective of the Astros name and logo, and decided he wanted to retain complete control of the licensing.

Fleer had the same issue as the Astros were missing from their team logo patches in 1967 & 1968, and finally appeared in 1969. Thanks for linking to my article on the subject.

Great post! I'm a huge fan of baseball history, especially when a team moves or changes its name. I always find the history of those to be very interesting.