This was going to be a post on the 73/74 Action Emblems but that will happen next time. After piecing together the backdrop for that particular story the whole thing morphed on me into something a little bit different and also follows the story of "The Team That Topps Forgot" in a more linear fashion.

Sometime in 1973 Topps must have explored a strategy of trying to market and sell baseball products (not cards, but products) without paying a licensing fee to Major League Baseball Promotions Corporation (MLBPC), was which controlled by the Owners. As Marvin Miller and the Players Union began to exact increasing fees for the use of player images, Topps must have been looking for ways to cut costs in the wake of the 1972 collective bargaining agreement, which I am reasonably certain resulted in a higher licensing fees for Topps for the use of player images.

Logoless cards, often small team sets or product premiums began to take off in the late 1960's as Major League Baseball teams began to take control of their licensing rights. The MLB website has a nice summary of this:

To quote from their website "from 1968 until 1986, all national licensing contracts were handled by MLBP through the Licensing Corporation of America (LCA), a division of Warner Communications, Inc. During this period, Clubs licensed their own trademarks to companies authorized to sell in the Clubs' respective local markets. In early 1987, virtually all licensing activities were centralized under the auspices of MLBP."

(MLBP stands for Major League Baseball Properties, which is the successor name of MLBPC)

In 1973 Topps issued a small set of 24 player Comics on the inside of a gum wrapper and also a related set of 24 Pin Ups. These and other sets discussed here will be the subject of more specific future posts but for this instance you can see these do not have team logos and only show a city name and not that of the team in the caption. 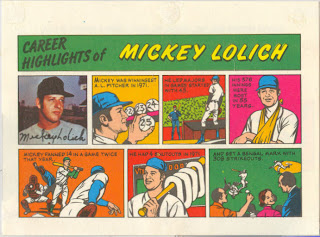 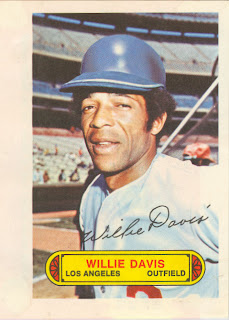 A set of fifty-five logoless Candy lids was also issued in 1973 but not before they were proofed in '72. For illustrative purposes, I will show the progression from 1970 (the first Candy Lids set), through '72 and then '73.

You will see in 1970 the team name is shown on the banner under McLain, while the Lid Top has three player headshots in the green stars, all with logos on their caps. 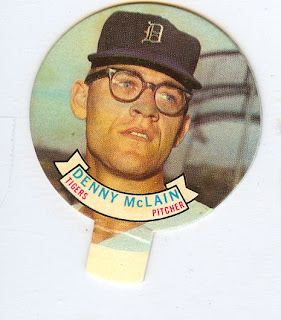 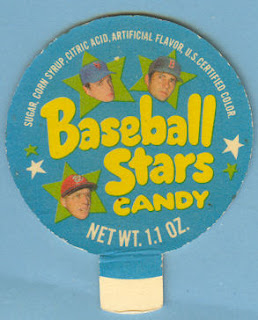 The '72's are similar to the lids issued in 1970 but the 1972 set has the city name on its borderless fronts, not the team name, as shown on the Sanguillen example. Then in 1972 note the lack of logos on the lid top caps of Seaver and Yaz in the green stars on the Lid Top and also on Ryan's Cap (not my Ryan but I claim ownership of all the others except Stargell!) on the flip. The lid top is additionally updated from 1970 as well, as Frank Howard is gone. On the Stargell, you can also see how the team logo has been airbrushed almost-but-not-quite away. 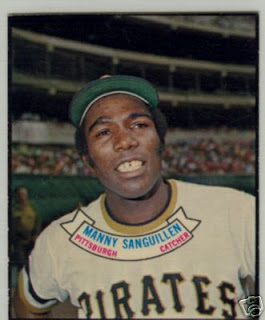 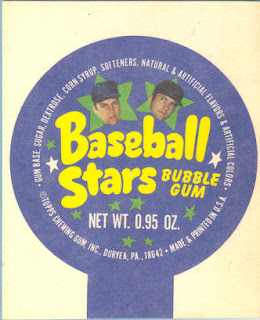 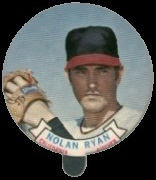 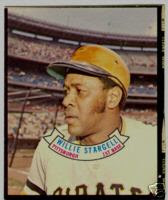 In 1973 the headshots float without their cap logos in red stars while the player shot is surrounded by a brightly colored border. The city name is shown and once again the team name is absent. 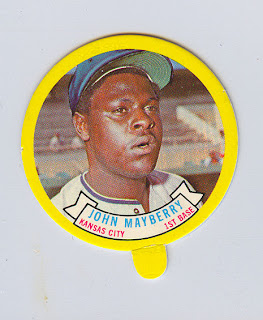 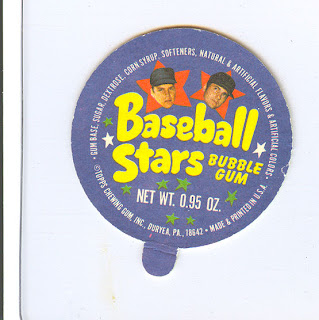 I have to think the '72 lids were proofed near the end of that year and were slightly redesigned into the version sold in '73, which had much more appeal.

In the midst of all this airbrushing, Topps even tried to create their own logos on a set call Action Emblems, which were test marketed in what seems to be no less than three different packs over two years in 1973/74. Ostensibly designed as Cloth Stickers (and the 1972 Cloth Stickers that look like the '72 regular issue baseball cards seem to have been a materials test for same) you can find Action Emblems in Cardboard Proof form and also an issued Glossy Sticker version in addition to the planned Cloth variety. I'll post a couple shots here and then delve into the Action Emblems and their mysteries soon.

This is a top and bottom shot of the cloth and cardboard varieties, cloth on top: 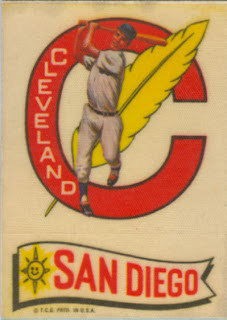 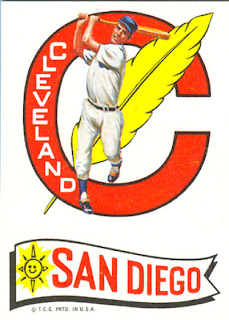 And then a look at some different logos created for this project by the Topps art department, from a proof sheet: 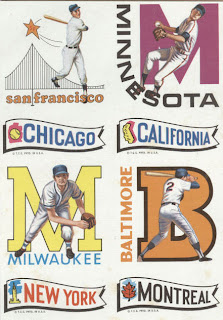 It is interesting to see how Topps tried to resist the increased licensing fees being imposed upon them but as well all know too well these days, the power of the Players and Owners won out and Major League Baseball Licensing is a billion dollar business these days.

Look for more on all of these soon, in particular the Action Emblems.
Posted by toppcat at 1:32 PM

Very informative post. Thanks for providing the great pictures to show the progression from 1970 to 1973.

I'm just glad Topps didn't have to completely airbrush their baseball card sets like they ended up having to do for Football because of the licensing fees.