A Kick In The Grass

Sometimes a set just falls through the cracks. In 1979 Topps issued an obscure set called Soccer Stickers. 33 in number, the set memorializes the logos and in puzzle form on the backs, three North American Soccer League Players. As far as I can tell this set does not appear in any of the major price guide books. It's not really a non-sports set and it's not really a multi-sport issue and soccer never was considered big enough to appear in the early hybrid (Football, Basketball, Hockey & Boxing) guides. You can buy a full 36 count wax box on Ebay at this very minute for a pittance so there is minimal collector interest. But it's a Topps issue and you would think somewhere a checklist exists but I just can't find one.

The NASL seemed poised for the big time in 1979 and in addition to a full schedule of outdoor games contested within six divisions, a ten team indoor league was about to be introduced. But instead of issuing a traditional set of players, Topps elected to create a sticker set that consisted of team logos and a few 4-in-1 "names" all featured on a hideous mustard colored background.

The cards came in a colorful wrapper though: 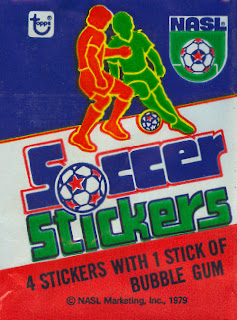 The packaging indicates 33 stickers are in the set. We know this because it appears in text for a premium poster that would allow all of the stickers to be displayed:

As I said before, the background color is fugly. Here's a large size logo: 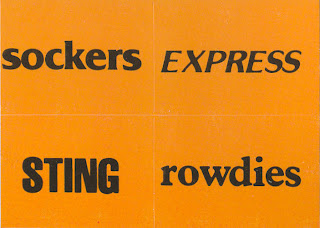 There are two (and a half) backs. Here is the "How To" instructional version: 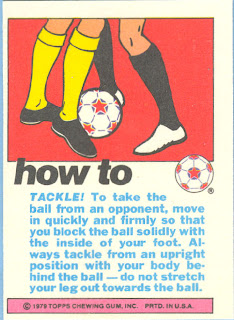 There are also puzzle piece backs: 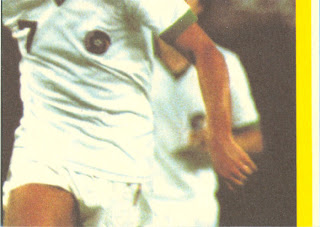 This scan I nabbed from an Ebay Store (Ernie's Cards) shows a full puzzle of Werner Roth (star defender for the New York Cosmos) and has very interesting companions as two cards show the completed puzzle on their reverses: 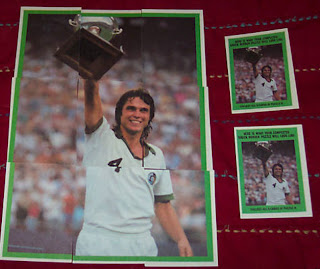 My yellow bordered back above is from the other puzzle, which had 12 pieces oddly enough: 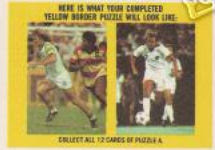 Ernie's store indicates there are nine "How To cards" so there must only be one sticker back showing the yellow bordered poster. 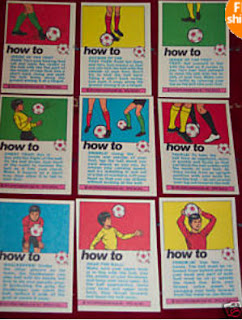 I don't know if all stickers were available with all backs or not (possibly not) but a full box would likely yield all the answers. Anyone out there have a few more details? If so, drop me a line.

Incidentally, I found a great NASL website here while researching this post. Perhaps the Memorabilia section will get filled in soon.
Posted by toppcat at 6:38 PM

These are awesome... I just found a San Jose Earthquakes sticker on eBay. I would never had known this existed without this article. Thanks.

Cool! I don't think these were released in the Phoenix area. We followed the NASL while Pele was playing for the New York Cosmos. Good times.

Topps missed the boat on the league and its collectors on this 1979 issue.

Can you imagine opening packs of baseball with only the puzzle and team logo stickers ?

I've made quite a few custom made cards for the 1970s that would have been great.

Oddly enough, there are more NASL players on licensed cards in the past year than all of 1979 !

Pele and Georgio Chinaglia are both in the Sports Kings set ...

I hope they do Beckenbauer next year.

Alan-Thanks for the list-I am going to re-post in a new entry so it's "up front".