I was going to do some super-snazzy stuff to celebrate my 100th post but it seemed trite after some contemplation and besides, it's way too hot today to do anything constructive. So I figured I would feature an obscure set of Hallowe'en masks produced by Topps in 1967 called Blockheads.

Being lazy and unfortunate (I don't own any examples) clearly gives me the massive justification I need to completely use scans and photos from other sources for this post.

Here is the subject entitled The Bleech, front and back from an Ebay auction a few months ago: 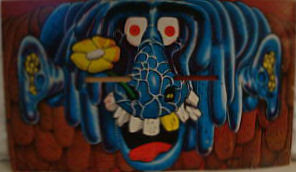 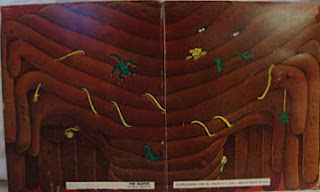 If you are a fan of the old EC comics, you will note the hand of Basil Wolverton. The whole set is really designed by Wolverton and Wally Wood and was primarily drawn and painted by Topps mainstay, the ridiculously talented Norm Saunders.

Here is some back detail from the same auction: 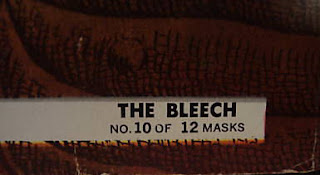 Here's how they were supposed to look when donned: 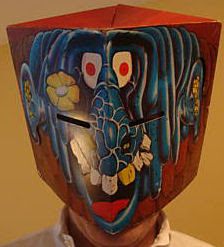 Chris Benjamin's Sport Americana Price Guide to the Non Sport Cards No. 4, an indispensable tome, lists the size of these as 7 1/4" x 8 5/8" but that is too small by half and must have been the folded size. Measurements from the Ebay auction indicate a width of about 14 1/2".

There is a nice Flickr page with more details here including a picture of the box and it links to the Saunders site which tells the story of how these morphed from monster masks to posters (the masks were considered too dangerous by Topps to fully release). These are rare and beautiful.

I don't want to lift too much from the Saunders site but the artwork for No. 4 Witch Doctor (by Wolverton) is too fabulous to pass up:

That is really something else!

The masks originally sold for fifteen cents. It would cost at least 1000 times that to get one now.

The Saunders site indicates these were recast as 3D Monster Posters but I can't find any information on that set at the moment, or maybe it was retitled and I'm just not picking up on it. The posters would be really tough as well.
Posted by toppcat at 7:01 PM

I remember purchasing the Witch Doctor mask. As of the early 1980s it was still in a box in a closet in my parent's house. I have no idea where it is today.

I have one in perfect condition. Frightened me when I found it in an attic behind old clothes.