As hinted at last time, there is a bit of a mystery surrounding the 1969/70 and 1971 Bazooka Baseball sets.  The 1969 All Time Greats set makes sense as the professional baseball centennial was being celebrated but the idea of it being reissued in 1970 always struck me as being strange.  Stranger still is the numbered  Bazooka set, not because of a return to the traditional three player panel but because it has been depicted for forty years as having been issued in 1971 but after the regular release, which was unnumbered.  The 71's are also referred to as proofs.  To further mystify us four decades later, the Topps brain trust also issued four extra panels in the numbered format, yielding a run of 48 cards on 16 panels instead of the 36 cards appearing on 12 panels in the unnumbered format.

My own take on it is that the numbered set was probably intended for distribution in 1970 and then pulled back for some reason.  A possible causative action may have been related to the players and teams depicted on the cards.  If we look closely at the four extra panels in the numbered set, we can almost see a pattern develop.

The #1-3 panel with Tim McCarver, Frank Robinson and Bill Mazeroski is up first. McCarver broke a finger in early May of 1970 and was out for a long stretch.  Robinson seems like he was reasonably healthy and intact in 1969 and 1970 but Mazeroski was slowing down and only played 67 games in '69 and lost his starting job at second to Dave Cash.  Depending upon the timing, the McCarver injury could have caused Topps to yank this panel or combined with Maz's decline it may have been deemed too unappealing to market this trio in 1971.  Here is McCarver: 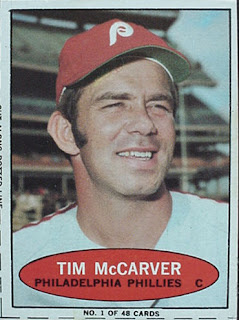 Cards #13-15, depicting Ferguson Jenkins, Al Kaline and Ken Harrelson would seem to be no-brainers to keep in the 1971 set.  Jenkins and Kaline had no issues that would preclude their being in a 1970 set but the Hawk broke a leg in spring training that year and missed all but the end of the season.  His 1970 season saw him play in only 13 games even though he would play one more year. Solution?  Pull the entire panel!  Here's what coulda been: 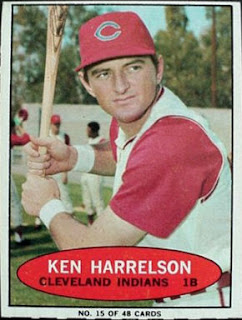 #34-36 displays Maury Wills, Tom Seaver and Tony Oliva.  Seaver was the hottest pitcher in the game from 1969-71 and Oliva had solid seasons all three years as well.  This leaves Wills as our likely culprit but no, he is properly shown as a Dodger: 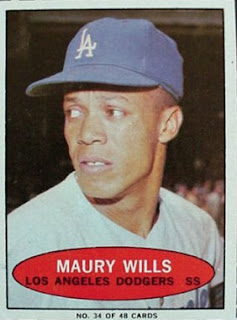 and had productive seasons in the 69-71 tranche as well.  Why this panel was pulled is a mystery, perhaps Tom Teriffic had another endorsement deal that kept him from being in too many Topps sets but really it's just bizarre this panel was excised.

Finally, we have #43-45 with Jim Wynn, Richie Allen and Tony Conigliaro.  Tony C of course was fighting his way back from a horrific beaning but it's Allen that caused the problem here.  He is shown as a Cardinal, even though I can't find a scan to show it right now,which was all well and good in 1970  but for 1971 he was a member of the Dodgers. The trade to LA happened in October of 1969 and as we already know, Topps was fond of starting Bazooka production in the year prior to issue, so '69 teams for a 1970 release makes sense.

Other than the Wills/Seaver/Oliva anomaly it all makes sense but since this is Topps, there is always something that skews things!  Was the numbered set to be a 1970 issue?  Based upon the Richie Allen Cardinals cards, I would have to say yes.  What caused the entire set to be shelved is something I cannot explain.  If they are truly proofs in numbered form, then they probably came to market through the Card Collector's Company.

As you noted, Bazooka started work on sets a year before their release. That makes me think they went with an All-Time Greats version because of the expansion teams that would debut in 1969. During that summer of 1968, who knew which players would be on which teams and what the uniforms would look like until teams actually took the field? Makes it tough to plan a checklist.

Another possibility is that Topps positioned the 1969-1971 run of Supers to "replace" their Bazooka box sets, but returned to the 3-player panels when Supers failed in the test markets.

Throw in the "Children's Guide to TV Football" set for the 1970-71 season and it definitely seems like Topps wanted to do something different with their sports sets following that expansion year...