Well campers, I was all set to compose a stultifying post on the intricacies of Topps legal entanglements with the American Chicle Company but that will have to wait for another day as something wondrous has happened.  Two 110 card half sheets of 1956 Topps Baseball have shown up in the current Clean Sweep Auction.  This is quite a development as mid 50's sheets are truly difficult pieces to obtain.

What has shown up are sheets from the 3rd and 4th series.  Here is the 3rd series one: 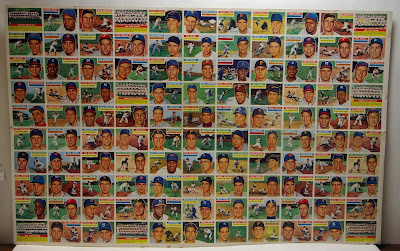 The sheets look odd because they are displaying horizontal cards but reading across, the columns (rows, really) are patterned A B C D E F G H B C D.  That's 30 subjects double printed and 50 single printed for a total series of 80.  The companion half sheet would have had a different array since there are no known short prints.  Instead, I think there is a good possibility the other half would have double printed the A E F G and H columns and then a random 3rd column.  Other arrays are also possible but I think the result would be 20 Short Prints no matter how you sliced it. There's so many 56's out there the short prints in this scenario (20 of them)  probably have not be noticed  Series 2, 3 and 4 in 1956 had 80 cards.  Series 1 had 100 cards to it so would have had 20 extra Prints.

Two checklists were issued in 1956, a Topps first now that Bowman had been vanquished and there were no gaping holes in the sets to worry about, nor stars, Stan Musial excepted, signed elsewhere.  With Bowman outpacing Topps by 1955, checklists could have had a negative effect by showing what was NOT going to be in the packs.  The checklists were "pushed" into the nickel and (presumably) dime cello packs) as they were not printed with the regular cards and show Topps had not yet developed the idea of lagging the series count against the sheet count, thereby allowing a preview of almost two dozen cards from the next series to be seen by the intrepid youths of the day.  That was a few years off still.  Here, see for yourself: 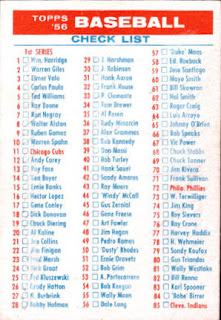 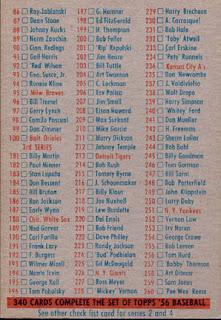 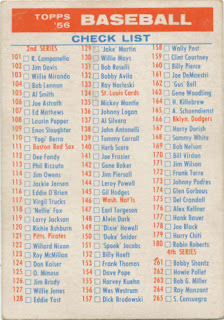 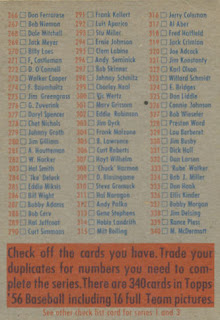 Here is the back of the 3rd series sheet:

The 4th series sheet exhibits the same pattern as the 3rd: 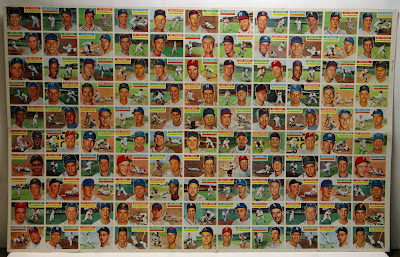 For the sake of completeness, here's the back of that one: 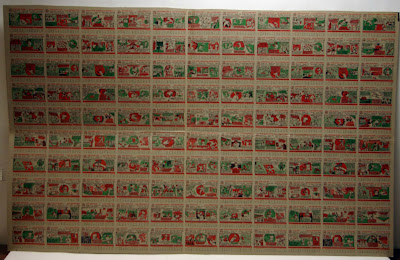 Topps also cut up some 1st series sheets to make very nice story displays promoting the 56's.. This scan is taken from the Spring 1982 issue of Baseball Cards magazine: 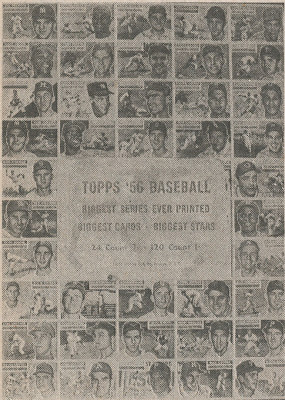 Thanks to all the Archivists out there who alerted me to this auction.
Posted by toppcat at 6:45 PM

1956 Topps baseball features one of the greatest designs in cardboard history.