They Waited 'Til Next Year

NOTE: I now believe the Red Back printing information below to be incorrect; it appears only two press runs were made.  See here for more information. 2/1/12

On occasion, during my random scourings of the Web, I run across an item that gives me pause.  A couple of weeks ago, while trolling around I came across an empty box of Doubles, the designation given by Topps to the last method of distribution of the 1951 Red and Blue Backs.  I have covered the various gyrations and iterations of this release before, narrowing down a Theory of Everything that ties the set into the Baseball Candy issues that Topps launched in their initial salvo against Bowman's perennial sports issues but a new angle has expanded matters a bit.

Doubles are well known and packs are prevalent to this day thanks to a large warehouse find in the early 1980's: 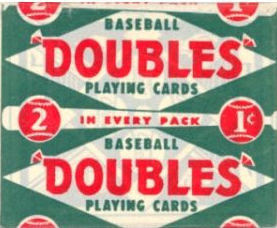 This pack has two Blue Backs within but more often than not they had Two Red Backs in them. After the caramel scare of mid 1951 where the product, then known as Baseball Candy, was pulled from distribution due to an alleged chemical interaction between candy and card that was (maybe) sickening people.  While the Baseball Candy issues more likely were pulled due to an injunction obtained by Bowman and not over the poisoning of the first wave of baby boomers, the results were the same and the candy had to go.  That left a pile of cards sitting in Brooklyn, something the Shorin's abhorred.
Ever willing to repurpose a trading card issue, Topps renamed the set Doubles and proceeded to repackage their intricately planned set in to singles, separated from their original, two cards panel configuration, presuambly by a small army of caramel resistant workers gahered together in the waning months of 1951. 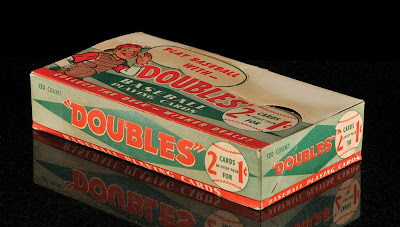 A box bottom has recently been photographed and while it looks rather plain, it contains a key detail: 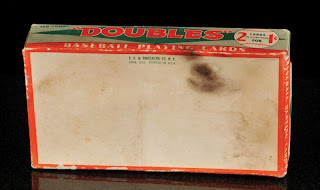 Can't see it?  Here is a closeup of the indicia:

Yes, it says 1952!  This now requires me to completely revise the perceived order of issue for these little guys, something I will get into next time out.  I still am unsure if these would have been sold alongside the 1952 Topps Baseball Cards or when they hit the street in '52 but sixty years later, Baseball Candy is slowly giving up its secrets.
Posted by toppcat at 7:37 AM

I know from my own writing activities that a work published late enough in the year (October or later) can have the following year's copyright on it to keep it from seeming "old."

Maybe these could have been issued really late in '51 and then continued into 1952 to help get rid of the stock. Not an expert observation...but merely a hypothesis.

Nice post,personally I appreciate your writing skill.I like your style.I will be back here for sure.

Chris-yes, that is possible, although I think unlikely here. I have seen it the other way with Topps, where they had an earlier copyright on a later issue so anything is possible. On the Doubles, I am not sure they would have sold baseball cards after the end of the season. Not impossible of course but I don't think they would have done that. At a guess, the penny Doubles packs would probably only have been sold where nickel 52 baseball was being offered, mainly in larger cities such as NY, Boston and Philly. But who knows?