One of the problems with buying vintage unopened Topps packs is that there is a lot of bogus product out there.  Wax packs are notorious for being pillaged, filled with commons and then resealed but cello packs are also created in ways to deceive.  However, the most obvious problem packs right now are "Christmas" rak paks.

Generally, these have a Holiday themed header card and three pockets of four cards each.  The earliest ones are from "1952", the latest ones stretch into the 1970's.  They are all 100% fake, produced well after the fact by third party sellers.

Here is a typical example: 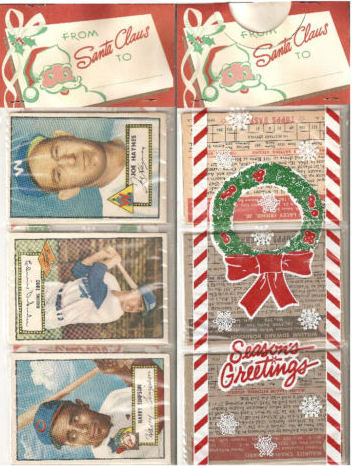 That mix of black and red backs does not seem like something Topps would have ever done! Sadly, these are being sold in volume on eBay and many sell for healthy prices.  Here is a later one from "1958" that is quite heinous:

The Bessent and Berra cards are nasty; off-center and dinged cards are common in these fantasy packs.  Here is yet another example from "1968":

Other variants exist with header cards that are mostly white, with a candy cane motif and feature artfully aged staples.  I can't find a scan of one right now but they are out there and probably predate the ones above to the point they could have been produced in the late 60's or early 70's.  The first mention of these I can recall was in Sports Collectors Digest over 20 years ago, when they were (initially) presented as being legitimate to the era, if not Topps.

Unopened pack dealer and expert Steve Hart has been interviewed in a good piece on many bogus Topps packs, well worth a read. Don't let the grinch get you this holiday season!
Posted by toppcat at 5:59 PM