You fearless webmaster managed to snag, amidst all the hoopla of the past two weeks, the partial remains of a 1956 O-Pee-Chee Golden Coin package of eBay the other day. Golden Coin has been blogged on here before but remains a slippery issue as there are questions as to the exact contents of the 1948-49 issue compared to 1956's, the correlation with various Meet The Presidents games, the oddity of a Canadian issue for a set of US Presidents, the lack of an identifiable 1952 issue and even the composition of the 1956 coins (as in chemical composition-metallic or plastic?) but my purchase answered none of these!  Rather I wanted to investigate the inner sleeve that held the coin and gum.

Redesigned from 1949, the inner sleeve is made of a thick cardboard with yellow and blue highlights:

Measuring exactly two inches by four, the sleeve advertises 33 coins, even though Grover Cleveland's kangaroo straight made it 34 in actuality.  The back shows the checklist and a glued down flap:

I even took a side view-it measures about 3/8" even though its distorted here:

The coins were numbered in 1956 but I can't find a Cleveland to see if he has 22 and 24. Here is our fifth President, James Monroe, to illustrate: 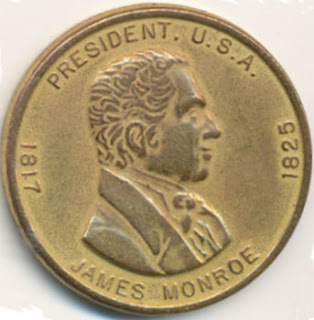 The number is clear, as is the shield--the 49's had a text back, as do all game pieces from Meet The Presidents no matter which year the latter were marketed: 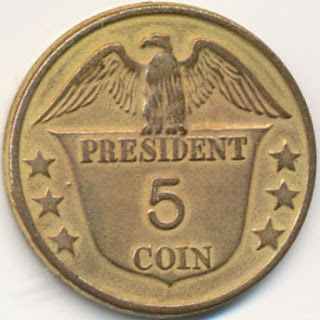 The coins look metallic but are made of a hard plastic, unlike the brass ones from 1949.  Mine is warped a little and there is a seam on the rim.  If I get another I'll dissect it to see what's what. These are larger than the 49's, which were an inch in diameter.  These are 1 1/8".  The coins may have been in a cello wrapper as well; I am unsure about that at present.

Here is the wrapper that held the above: 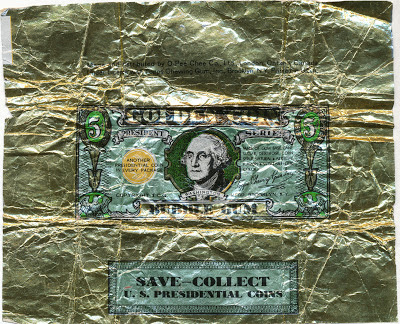 As mentioned, it appears to be a Canadian issue:

The flipside held a It Happened To A President Comic, which have been looked at previously. These are red, the earlier version is not and is more of a brown/rust color. That though is fodder for another day. 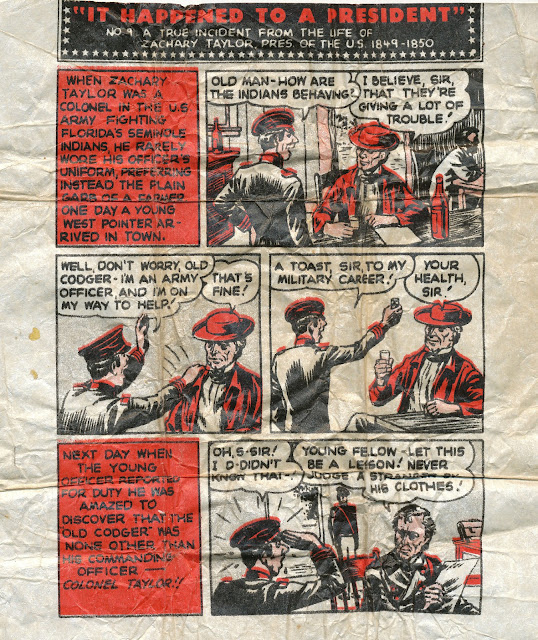 I am very much interested in information on Golden Coin.  If you have something new or different, drop me a line.

Email ThisBlogThis!Share to TwitterShare to FacebookShare to Pinterest
Labels: 1956 OPC Golden Coins, 1956 OPC It Happened To A President

I have the Grover Cleveland coin and it has the numbers 22 and 24 on the same coin. I have 28 of the coins. Any idea of the value?