Friend o'the Archive Al Richter, who has one of the more extensive collections of vintage Topps cards out there, gave me a heads up on some neat items related to the 1969 Baseball Team Posters set the other day and which turned out to be something I had never seen before.I'll get back to this little bit of detail shortly but first want to look at the set.

The posters  are quite large and feature head shots of eleven players from each of the 24 MLB teams in existence at the time of issue. These were sold in their own packs,for a dime, as this wrapper shows: 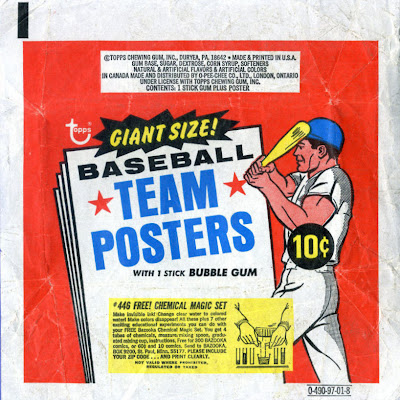 The odd thing about this set is the production code (lower right corner of the wrapper) ends in a 8, which means a 1968 production, so they were likely issued quite early in 1969.  The wrapper also lists Duryea and not Brooklyn as the place of manufacture, a changeover which did not occur on their mainstream packs (except the experimental cello ones) until the middle of the 1969 season. So this baby is one of the first products to list the new home of Topps (although their executives remained behind in Brooklyn at Bush Terminal). Here is a look at the box: 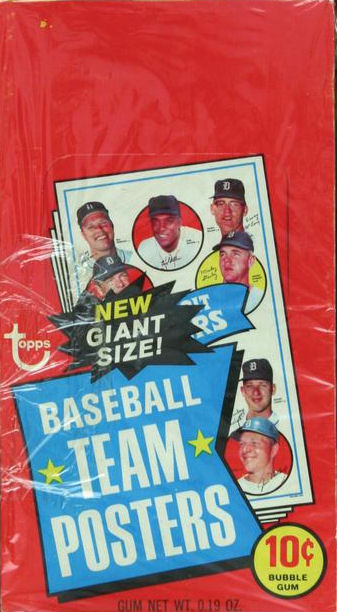 That Tigers poster on the cover of the box is also seen in this proof sheet of to posters (source unknown, sorry): 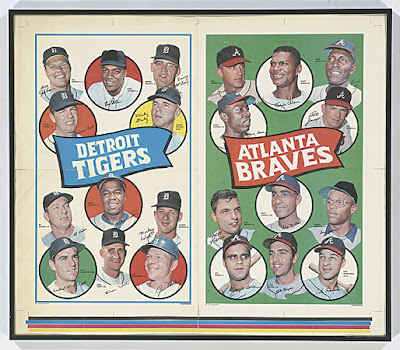 Only a single poster came in each pack.  Each was folded many times and when opened measured out a whopping 12" x 20", which I believe was the largest item produced by Topps in their vintage era. It's a tough set for a couple of reasons as they are fragile (although not as thin as the poster inserts in 1967 and '70 or the 1968 Player Posters), display obvious fold lines and they are also hard to store and display.  On the plus side the photography is quite good, the posters are very colorful and they give a great look at the four new expansion teams in Montreal, San Diego, Seattle and Kansas City. 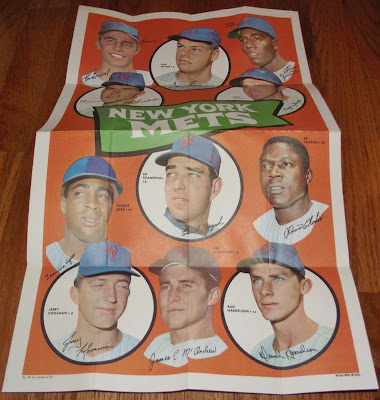 The Mets, Pilots and Yankees (featuring Mickey Mantle) are the three most sought after examples in case you were wondering. There is numbering in the lower left corner of all but two posters that describe each as "No. xx in a series of 24", although the aforementioned Mr. Richter has determined the posters of the Cubs and Red Sox are missing this line.

So back to the original teaser....while these are reprints, Al noted some ads listed on eBay that featured the set.  Here is one now: 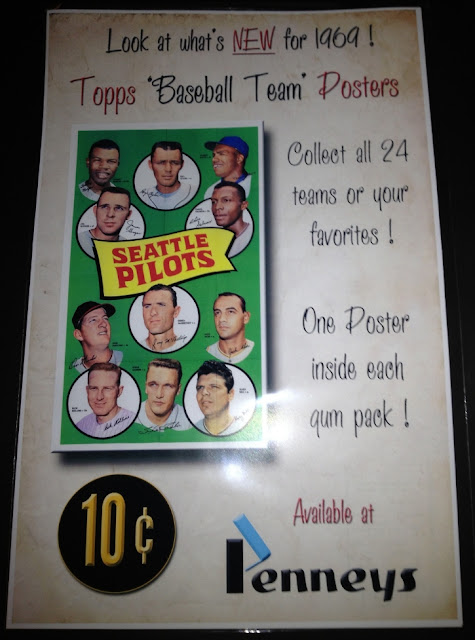 The seller (hpotter56) also had a Yankees version: 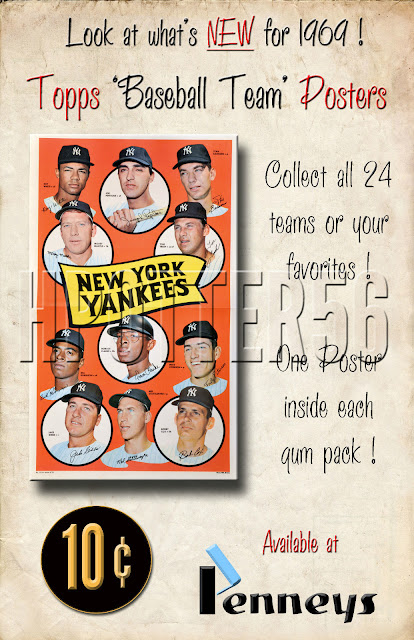 These were designed to be window displays apparently but I want to find an extant ad or reference before declaring these ad posters real.  Assuming they are, they are neat items even if repros.

It's hard to believe now but department stores such as Penneys and Sears had candy counters back in the day and also sold various pre-packaged confections.  I think Penneys was also the source for boxed sets of 1974 Topps baseball cards that were experimentally released almost forty years ago.

I guess the 1969 Team Posters were thought to be a hot item but not too many collectors who were kids back in the day recall them being available. I suspect a hoard of posters has been working its way into the market.  These used to be a lot harder to find than they are these days and in the past many were found with tack holes or corners missing or taped. There are many available these days that just have the fold lines and are pristine otherwise.
Posted by toppcat at 4:56 PM