Well I don't want to be a frontrunner against my own update for 1949's Flip-O-Vision, slated for an upcoming issue of The Wrapper but a couple of things have transpired that lent insight into this obscure (and tough!) issue.  I'll leave the big update for the world of print media and instead concentrate on the little one, namely that if you own Production No 17, you probably only have one of the two versions that were issued.

Roddy McDowall, or Corenlius to you all, is the star of # 17 (and the "star of Allied Artists' "Tuna Clipper") but his Flip-o-Vision Production was titled either "Dollar Scholar" or "Look Mom, No Teeth": 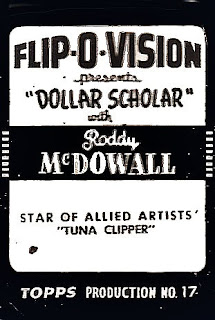 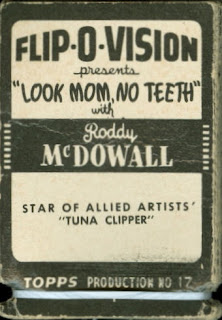 I assume the interior did not match one of the titles so hence the change.  It's the only duplicate title I have seen so far in this set although more are rumored.  Many thanks to Claude Emond for pointing this out and kudos to Dan Caladriello for the top scan (from the Net54 Vintage NS Gallery).

Once The Wrapper article publishes, I'll update the other information here.