Let's put the information from our last adventure, the Field Guide To Dating Topps Wrappers,  to the test today.  Imagine a string of eBay listings for a Topps Ugly Stickers wrapper.  First issued in 1965, the set saw three reissues in 1973, 1974 and 1976.

Take a look at two wrappers, the first from a Legendary auction a while back and the second from eBay: 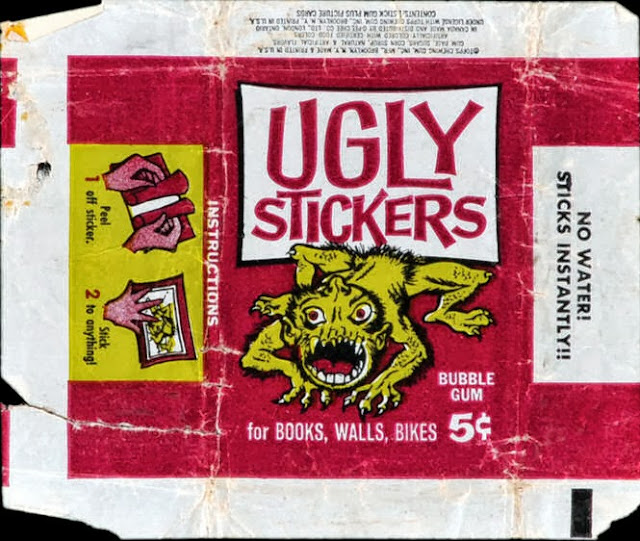 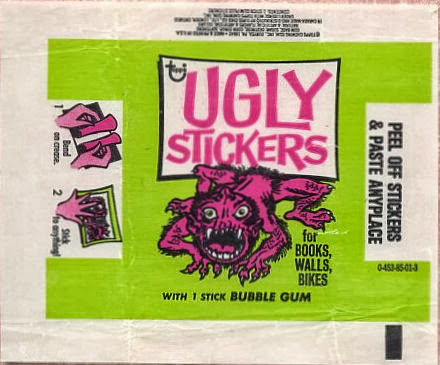 Both are described as 1965 wrappers but only one is of course.  In terms of easily distinguishable features the first on has no manufacturer's logo on it and no production code displayed, although a five cent price is prominent.  The second one has the "curved" Topps logo, a production code and no price.  The five cent price on the first is a clue that it was manufactured before the middle of 1969.  The lack of a logo makes it harder to cipher as without it you can't be sure of a pre-1966 issue unless you know the history of Ugly Stickers, which you assuredly would if bidding on the wrapper.  The lack of a production code would indicate a pack sold before 1966 or 1967 to boot. So the purple wrapper is easily confirmed as being from 1965 and this being a popular set, is the most valuable of the four.  The green one is clearly from 1973 as the production code of 0-453-85-01-3 makes clear. 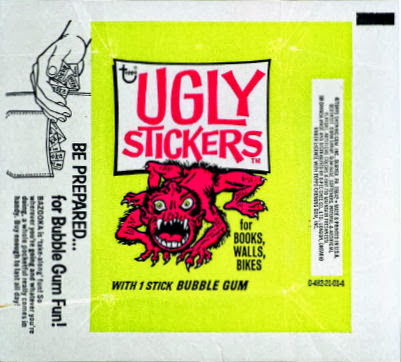 Similar to the other two wrappers, this has more information in the side panels but you only need to spy the production code of 0-482-21-01-4 to know it's a '74.