One of the tougher Topps issues to track down are the circa 1956 Davy Crockett Tatoos.  The first of the themed, penny tatoo issues from Topps (whose previous releases were under the generic rubric of Tatoo), Davy is thought to include at least 16 and possibly even 24 subjects but there does not seem to be a complete checklist available anywhere that I can see. That's because these little buggers are tough to find and then some.  Well, thanks to Friend o'the Archive Marty Krim, I have finally procured an example of this primeval issue:

This was a Bubbles, Inc issue, likely because it was not a licensed Davy Crockett product and Topps had previously produced two Crockett card sets with images licensed from Disney.  That revolver is said to be an anachronism, first manufactured after Davy's death either at at the hands of Santa Ana or inside The Alamo.  I like the interior tatoo image on this one:

Prior to my purchasing this example, I had never seen another one except in a Sport-American Guide. The typical Topps production rip at the top is present and this manufacturing artifact has been discussed at length previously. The size is the same as the 1953 Topps Tatoo issue at 1 9/16" x 3 1/2". 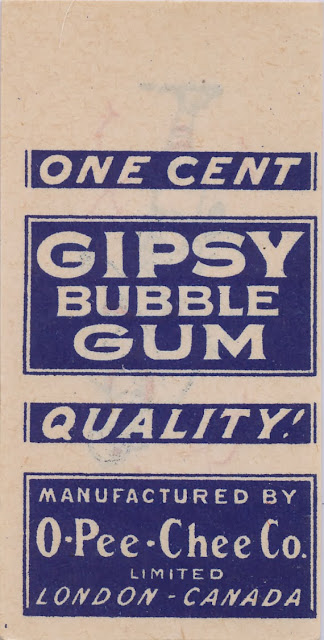 Bobby Burrell, who is my go-to-guy on all things O-Pee-Chee, seems to agree with my dating of this as late 1930's but I may have to contradict myself now that I have measurements.  At 1 7/16" x 2 13/16" the Gipsy is smaller than a 1953 Topps Tatoo but larger than the 1949 issue of same. This is relevant because all of the Gipsy images I have seen replicate those from the Tatoo issues. This ballplayer is known in Tatoo: 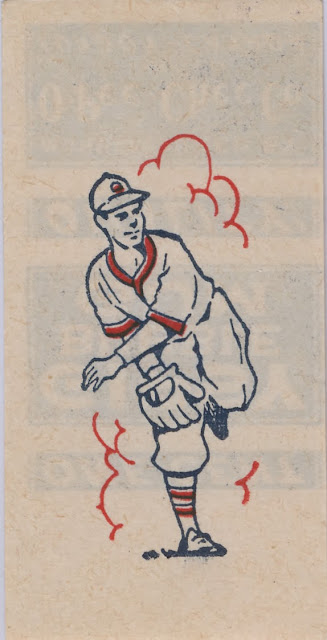 Since Topps did not establish itself in Canada until 1947, if Gipsy came first then it could mean O-Pee-Chee provided Topps with the images for their first novelty set.  As O-Pee-Chee was a far more established company, this makes some sense.  The 1948-49 Topps Magic Photo issue also used images from a photographic art agency or two and were not original creations.

Canadian sets, amazingly, are not fully catalogued and there was a lot of great stuff issued up North well into the 1970's that nobody down here below the border really knows about. The Tatoo/Gipsy connection is intriguing and I hope to ferret out more about it.
Posted by toppcat at 6:30 PM