A Prayer For Owen Ricker

We have a special guest blogger today folks. Keith Olbermann was nice enough to share his latest insights on the "1966-67 USA Test" Hockey set. You will quickly see why I used quotes around most of that once you start reading this fascinating post, as his conclusion looks bulletproof to me. So without further ado:

I reached this conclusion circa 1973 and I’ve never seen any evidence that contradicts it. Nor, sadly, have I ever seen anybody acknowledge what to me is blatantly obvious. A simple comparison of the players included in the Canadian series and in the lighter-grained American version either requires that the American cards were distributed a year later, or that whoever picked the players in the American set was the greatest sports psychic of all time.

Remember that the NHL doubled in size to twelve teams with the landmark expansion in June, 1967. Not only were literally dozens of players from the “Original Six” drafted by the six teams in the new NHL West, but new and old teams alike scrambled to trade for what they didn’t get, or no longer had.

Subtracting the coaches, All-Stars, and others, there are only 108 player cards in the Topps Canadian 1966-67 set. 34 of those players changed teams in June, 1967 trades or in subsequent trades. The cards of all but one of those 34 players are not in the Topps American Test set.

So if that American test set really was issued in the same year as the Canadian cards, we have to believe that whoever culled the 132-card Canadian set down to 66 Americans didn’t pick the obvious and simplest way — just use Canadian cards 1-66. Instead, he took 30 cards numbered 67 or higher and seeded them in to the American checklist and in doing so,accidentally chose to remove all the guys who would be on different teams in 1967-68! If this is correct, one hopes this gentleman retired from Topps and went into gambling or the stock market because that kind of ability to forecast the future would have made the cliched legend of Nostradamus look like a guy who once made a lucky guess on a coin flip.

But of course, as I wrote above, one of the 34 players who would be with a different club is in the American series. For my money, that just proves the conclusion that the American set is actually from 1967-68. The player is Red Kelly, the Hall of Famer who is listed with the Leafs in both series: card #79 in the Canadian issue and #42 in the American.

What little is known to the hobby of how the Topps American cards were distributed comes to us from Owen Ricker, a Canadian collector prominent in the ‘60s and ‘70s. He insisted that he had located cards from kids who had collected them when they were released, and that the kids were from Long Beach, California, and that the kids had said the cards hadn’t been sold in stores — they had been handed out without gum or any identification by neighborhood Ice Cream Truck drivers. After Ricker wrote up these details in The Trader Speaks in the early ‘70s, the next bit of hard information about the distribution came in Bobby Burrell’s Vintage Hockey Card And Collectible Price Guide in 2015, in which the cards were identified as having been distributed only in cello packs, which are said to have codes indicating the cards were packaged in 1967.

What does this have to do with Red Kelly?

The only guy in the American set whose status changed between the 1966-67 and 1967-68 seasons and yet still had a card in each series, left the Maple Leafs that summer to become…the first coach of the Los Angeles Kings.

My complete theory about the Topps Test set is this. The NHL went from having teams in four American cities in 1966-67 to having them in ten in 1967-68. Topps, having not sold hockey cards in this country in thirteen years, decided it was time to test the market. The expansion made 1967-68 a tough year to make hockey cards anywhere on the continent. None of the expansion teams are depicted in the 1967-68 Canadian set, and many of the cards that were made relied on brand new photos from the training camps of 1967, suggesting the Canadian cards might have been released later than usual that year. If Topps wanted to see if kids responded to hockey in Los Angeles and if they wanted to do it early in the season, the only cards they could’ve used would have been versions of the ’66-67 set.

So the adjustments were made as cheaply as possible (lose the French off the back, drop all the players whose cards were now out of date, make sure the superstars who were not in the 1966-67 numerical sequence like Gordie Howe and Jean Beliveau replaced some of the players who were dumped) and throw in arguably the most recognizable name associated with the new team in the largest new American hockey market - Coach Red Kelly of the L.A. Kings.

So why not change the card so it read “Coach, Los Angeles Kings”? Or why not include other new Kings like goalie Terry Sawchuk and their original captain Bob Wall? Indeed, why not include other superstars who had gone in the expansion like Glenn Hall and Andy Bathgate and acknowledge the existence of the new American teams? Why wouldn’t those 33 dropped players, all but one of whom went to American teams, have been more appealing in a set designed to test a post-expansion American kid’s taste for hockey cards than the stars of the Montreal Canadiens? I can’t offer an explanation other than laziness or haste. Even if remaking the card fronts would have been too time-consuming or expensive, the backs could have easily been updated, and the color of the wood grain on the front was changed anyway. 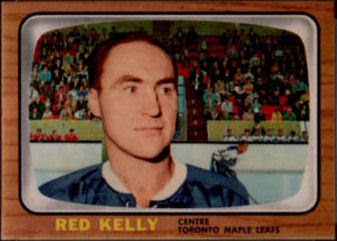 (Canadian Red Kelly above and below) 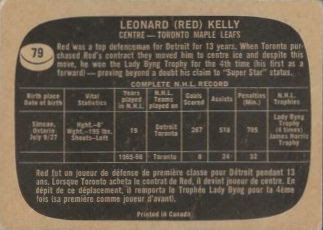 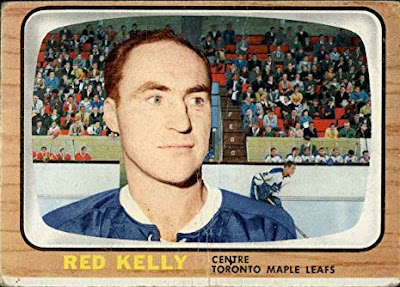 (USA Kelly above and below.  Note white stripe on front, found on many US cards) 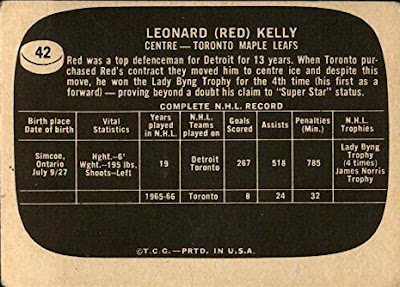 Of course, some of these side questions might lose relevance if the American Test set was tested only in Los Angeles. There is something authentic-sounding about Topps, not having a couple of reliable candy stores near Brooklyn HQ to vend their test marketing into an unsuspecting universe, simply cutting a deal to have the cards handed out by the Good Humor Man. The locale Ricker’s kids cited — Long Beach — is especially suggestive. The Kings played the first two home games in their history not in the not-quite-finished L.A. Forum nor even the hockey-ready L.A. Sports Arena, but in the Long Beach Arena.

Anyway, these are ancillary points. It’d be lovely if they could all be explained. But they overshadow the main one, which is: this is another ‘60s Topps test set that has been assigned the wrong year of issue (the others are 1967 Topps Baseball Giant Standups, which have to be from 1968 because pitcher Jim Hunter is listed with the Oakland A’s, who didn’t move from Kansas City until after the 1967 season, and the 1968-69 Topps NBA Test set, which is clearly from the 1967-68 season because it shows Zelmo Beaty and Len Wilkens with the St. Louis Hawks, who moved to Atlanta in the off-season of 1968).

The chart below shows each change between the two wood-grain hockey sets, and each change for the players in the original 1966-67 Canadian issue. The pure math is messed up a little by the inclusion in the American set of Red Kelly, plus 64 players active in both seasons, plus one 1966-67 coach (Punch Imlach, who might be there because as any hockey fan knows, he coached the Maple Leafs to the Stanley Cup in ’67). It is interesting to note that ten players who didn’t change teams didn’t make the American cut — and a disproportionate seven of them were with Canadian teams.

Oh and by the way, since the 1967 Expansion and “The Original Six” are the centerpiece to my conclusion about these cards, I should mention that there is no “Original Six” — but that’s an argument for a different venue.