What In The World?

When the World Hockey Association came along in 1972, their team owners knew they had to make a big splash to compete with the expanding and increasingly robust National Hockey League and that they did, with the signing of Bobby Hull to a rich (by the standards of the times) contract with the Winnipeg Jets. They also managed to lure another 66 NHL players away and after withstanding a series of lawsuits and largely penurious economic conditions, lasted seven tumultuous seasons, ultimately seeing four teams absorbed into the National Hockey League.  O-Pee-Chee got into the game right away by including 52 WHA players in their last series in 1972-73, including the aforementioned Golden Jet.

The 1973-74 OPC set did not include WHA players and it seems to me the NHL made it clear the two leagues were not to share pack space ever again.  And if they didn't, they certainly should have!

Topps gave not a whit about the WHA in the US and really, given their shorter sets, didn't seem too worked up about the NHL either during most of the 70's. O-Pee-Chee though, was happy enough to put WHA players into the hands of Canadian consumers and issued a set of large player posters, 20 subjects long in 1973-74. I had to snag these images from an online post made by one 200lbhockeyplayer over at the Freedom Card Board as mine is too big to scan and my stitching abilities are, shall we say, non-existent: 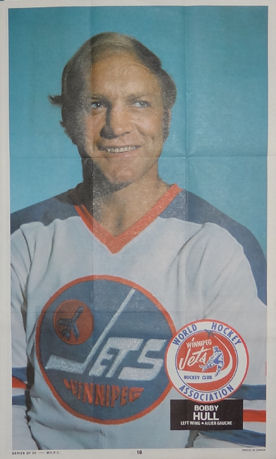 There was also a great shot of the Howe family's hockey players among the posters: 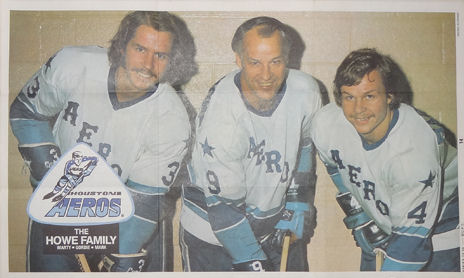 Posters measure about 7 1/2" x 12 1/2" according to Bobby Burrell and are on better stock than the NHL posters of two seasons prior.

The wrapper indicates these were licensed from Topps.  Strange, as you would think O-Pee-Chee would have had the means to create their own set; indeed the posters display an O.P.C.copyright in their lower border: 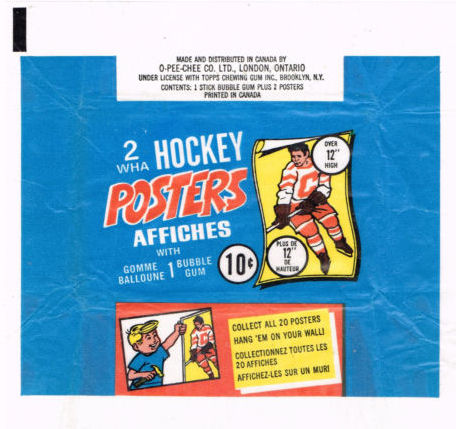 You can clearly see that design was taken from the 1968 and 1970 reissue of the Topps Baseball Player Posters: 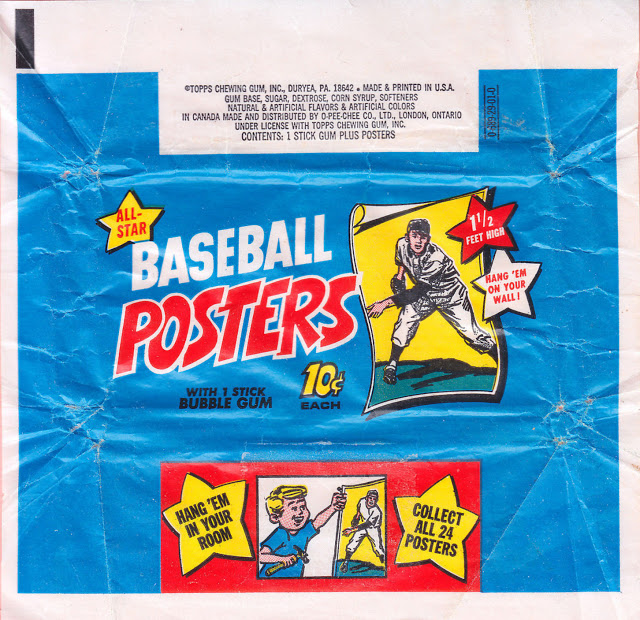 The lack of a card set would seemingly indicate there were legal wranglings occurring that prevented a standalone set of pasteboards being issued for the new league. But Quaker managed a 50 card WHA cereal prize set so they may simply have stolen the puck away from the Topps/OPC juggernaut for a season. 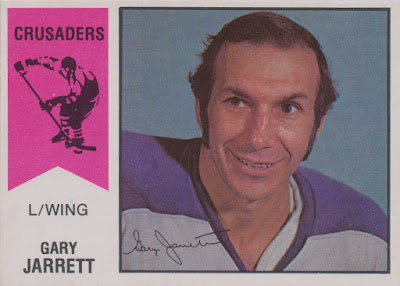 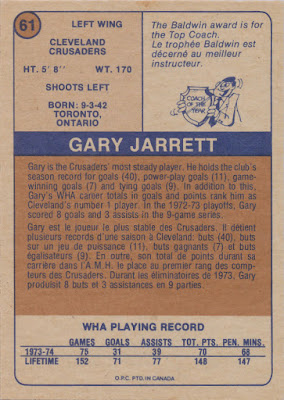 The wrapper is quite colorful and a reflection of the times; that surf green color is off the charts: 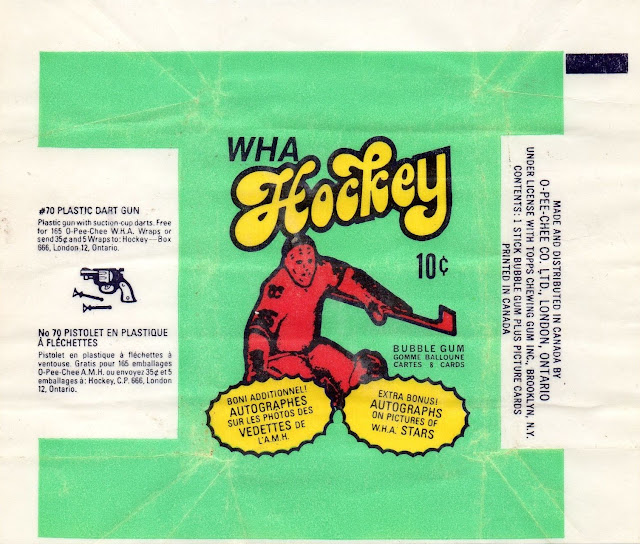 The autographs were the facsimile ones on the front of the cards.  Big whoop. The licensing from Topps continued unabated though! 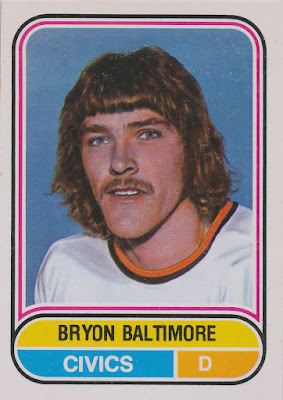 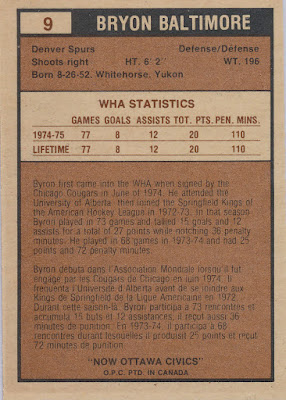 That card just screams 70's...so does the wrapper.  This one is from Friend o'the Archives Bobby Burrell's Vintage Hockey Collector Guide:.  Go show his hockey forum some love too, eh? 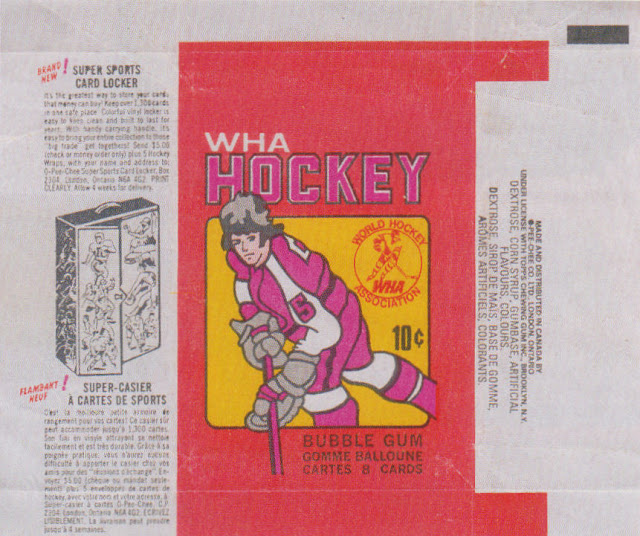 Things were pretty static for 1976-77 with O-Pee-Chee and the WHA; 132 cards again and the grooviness wearing off: 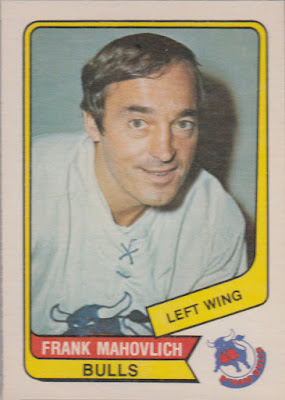 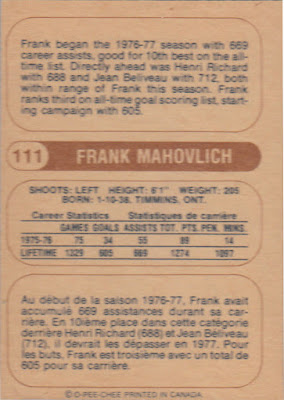 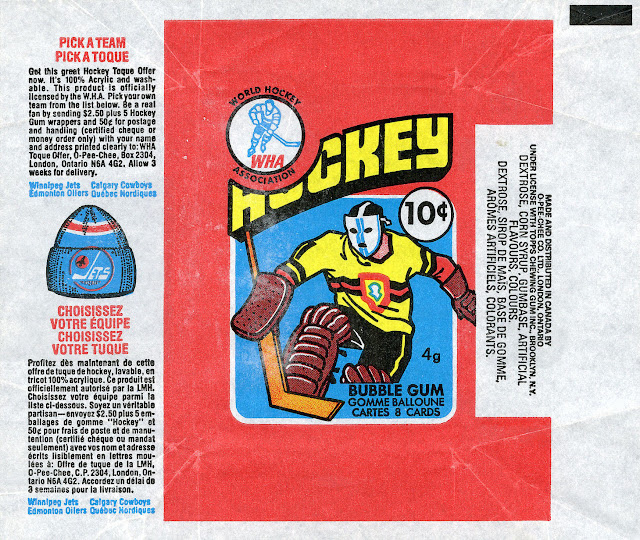 More of the same ol' same ol' in 1977-78, the last year of O-Pee-Chee's WHA issues.  132 cards that were not all that attractive unfortunately.  Too bad they couldn't have issued one further set, they would likely have included Wayne Gretzky's rookie card if they had hung on. 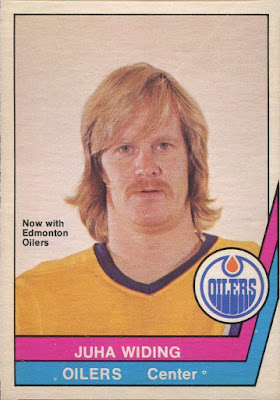 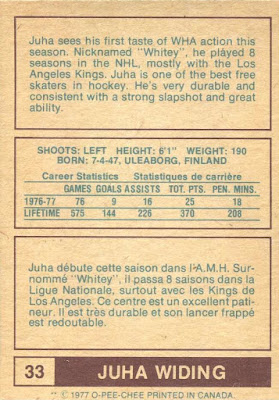 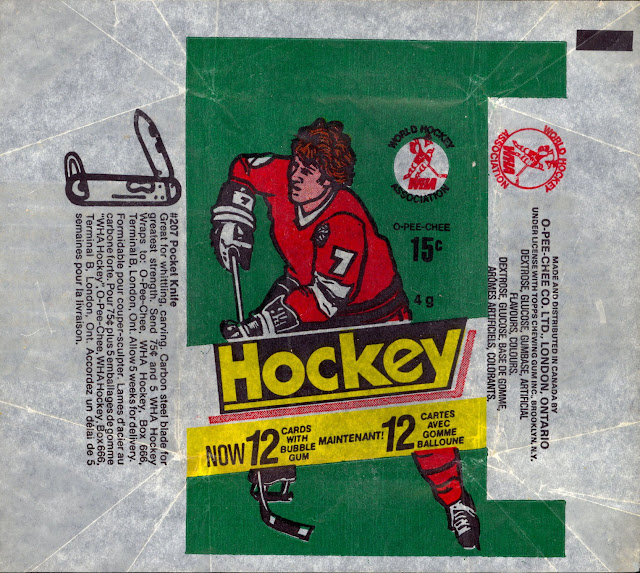 They did save the best for last though.  Gordie Howe scored his 1000th goal (between the NHL and WHA, including playoffs) on December 7, 1977 so O-Pee-Chee scrambled to include this card in the set, which was their  #1 and also his regular card for the series. 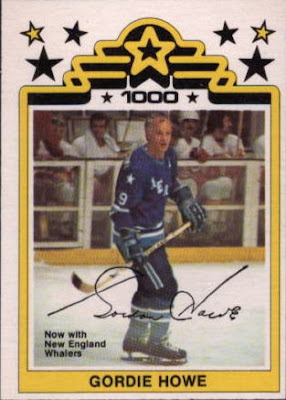 No inserts, fairly blah designs but you know what, OPC documented the WHA as well as any other source, if not even surpassing them.  Bien joue!