So we are, amazingly, coming up on eight years of this blog and as I was rolling around in the "posts" section, which I do occasionally and where I can see stats, etc., I noticed a couple of eye-popping page counts for a few posts over the years.  So I thought I would take a look today at the top ten posts in terms of page views, which led to a few surprises.

As of the date I am composing this (July 30, 2016) the blog has 56 subscribers and an average post gets roughly 135 page views; 658 posts have been made as of this date. It takes a couple of weeks after a post for that page view count to be reached. Some posts have very few views, especially those from the early days (Sept.-Dec. '08), although a post I made on the 1961 Dice Game set on January 2, 2009 seems to have brought attention here hence, likely because I mentioned it over at Net54.

Speaking of the Dice Game and before I get rolling here, I just noticed something today as I was editing the scans to insert here.  Take a look: 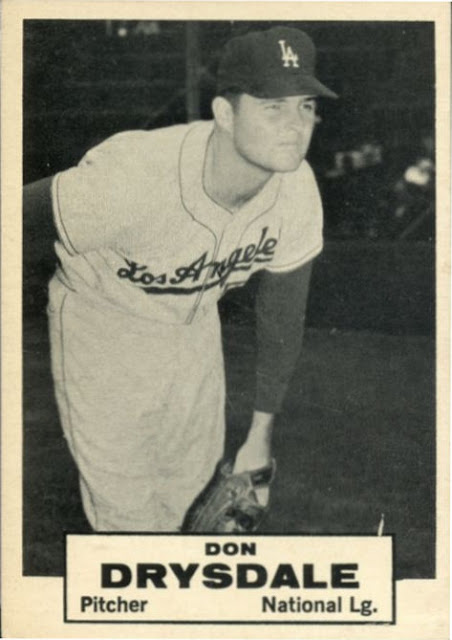 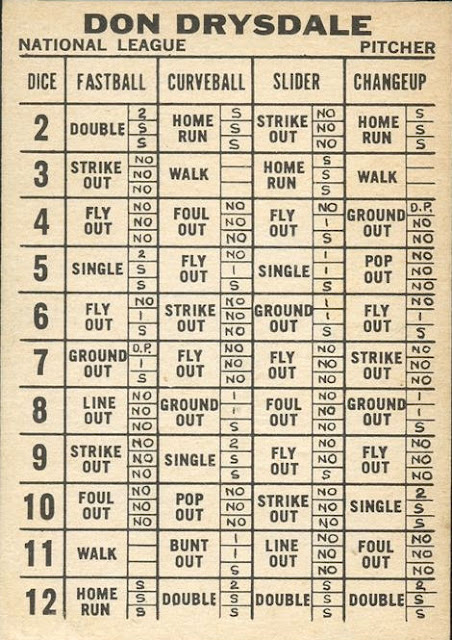 Look closely at the baserunning results boxes (the three little boxes to the right of each batting result).  They are hand drawn! I guess there were size limits on those great Topps fonts after all and the variety is vast on these:

Speaking of variety, there is quite a bit of it among the top ten topics and a couple have an exponentially higher number of views than those that came before. Counting down, we start with:

#10 (973 views) - Test Pattern-The Mid 60's Black and White TV Cards From Topps (Part 4) which was the conclusion of a popular four part series on black and white test cards of TV shows issued by Topps in the 60's. Land Of The Giants, Captain Nice and Bonanza were highlighted. Part 1 is even more popular, as we'll see below.

#9 (999 views) - Catching Up on Coins and Cards almost made it to four digits, we'll be there soon I bet.  This covered a few areas: 1952 Baseball high numbers, Batman, Krazy Little Comics, 1980 Baseball Coins, presentation boards and prototypes. I don't do as many wide ranging catch up threads as I used to as I tend to just devote a full post to one updated topic these days

#8 (1,007 views) - Easy As A&BC  is one of the surprises to me.  The post covered the 1970 English & Scottish Footballer sets issued by what was essentially a company Topps controlled via indebtedness.  When I posted this one, Blogger didn't allow ampersands; I went back later and converted every "and " to "&". Don't ever say I'm not willing to go the extra kilometer for all of you!

#7 (1,119 views) - Naughty Not Nice, a look at those fake Rak Paks polluting the hobby for decades now. Caveat Emptor!

#6 (1,127 views) - Bigger, Longer, Uncut, which featured 1952-56 Baseball uncut sheets and panels. Uncut Topps sheets have always been one of my favorite subjects, yours too apparently.  Too bad many are being cut up after market in the quest for high grade slabbed cards. I'm a firm believer in vintage collectibles staying in the form in which they have survived down the years and decades.

#4 (1,476 views) - Fleer Factory showcased the other major competitor Topps had in Philadelphia in addition to Bowman. Fleer got involved with issuing cards for real in 1959 and was a major threat to Topps' baseball card supremacy in the early and mid 1960's. They sold their player contracts to Topps in 1966 but a decade later their lawsuit paved the way for the modern era of baseball cards that started in 1981. This is one of my favorite posts.

#3 (1,903 views) - Who Ya Callin' Short?!, another favorite of mine, harkened back to my first piece of hobby research, namely the 1967 high numbers. 1967 is an immensely popular set and the high numbers have been the subject of scrutiny for decades. I first realized Topps often printed two different sheets for each series during their golden era as a result of this research.  For the record, the eleven true short prints in the high numbers are: 552 Savage, 553 Yankees Rookies, 558 Orioles Rookies (Belanger), 563 Adcock, 568 Sullivan, 581 Mets Rookies (Seaver), 586 Jiminez, 591 Cline, 597 Abernathy, 603 A's Rookies, 607 Stanley.  An open question is whether or not the 67 high number short prints are harder than those from the year prior.

#2 (2,423 views) - Field Guide To Dating Topps Wrappers explored various ways to date Topps products based upon the clues on the wrappers.  A lot of my research depends upon the indicia found on retail wrappers or the bottoms of retail boxes. I thought this would be the top viewed post but it wasn't, not by a long shot.

#1 (5,976 views) - New New Developments (Blue Sky Version) took an in depth look at the 1967 Baseball Punchout set.  I was shocked to see how many page views it had. Oddly other posts on this set did nowhere near this number and were mostly in the low hundreds. I almost have to question this view count then but Google says what it says.

So baseball, UK soccer and non-sports seem to be among the most popular subjects around here.  I'll be looking more and more at the non-sports issues from Topps going forward as that's where my main interest lies these days but we'll still have the usual mish-mash of topics here as we get close to and enter our ninth year.

UPDATE 10/4/16: It's funny but since I posted this the average view count seems to be hovering around 250.