Happy St. Patrick's day everybody! Topps never issued a St. Paddy's day set but maybe when I get into my latest acquisition, it will make some of you green with envy!

Woody Gelman, with competition springing up in the card resale market, began putting out a regular newsletter in April of 1959.  He dubbed it "The Card Collector" and if he didn't write the early issues himself, I'm sure he had some editorial assistant do it after Woody dictated articles to the Steno pool at Topps.  TCC would eventually see 38 issues published through August of 1964 and I've  managed to pick up a run of the first 11 issues recently, with a scattershot of later issues soon to arrive. Today I'm happy to share some highlights and amusing tidbits from the first four issues.

Fashioned at first from a single sheet of paper, folded in half (and then folded again for mailing), and featuring awesome Jack Davis artwork throughout, four small pages kicked things off: 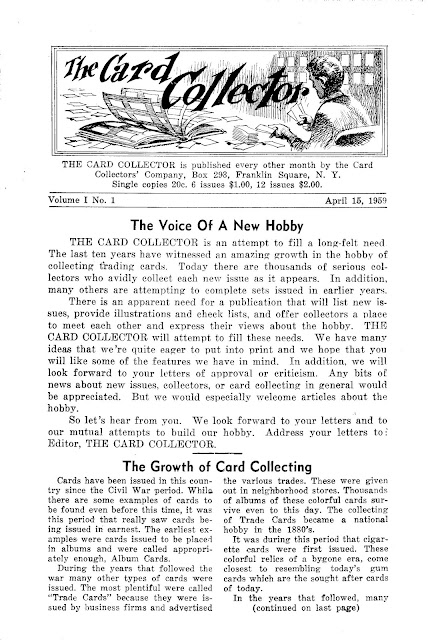 Pretty mundane stuff really, although Woody knew his hobby history, being a part of the American Card Catalog editorial team. Things got esoteric early on, although you would not see any kind of depth in these descriptions of the 1951 Topps Baseball Candy releases: 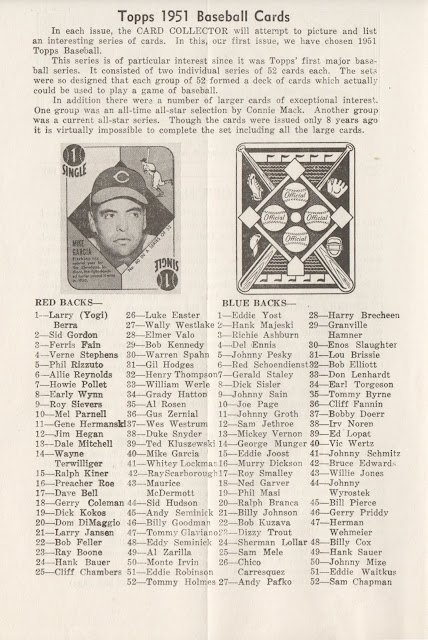 Despite the admonition above concerning the impossibility of completion, the below checklist makes no mention of the three impossible Major League All Star cards: 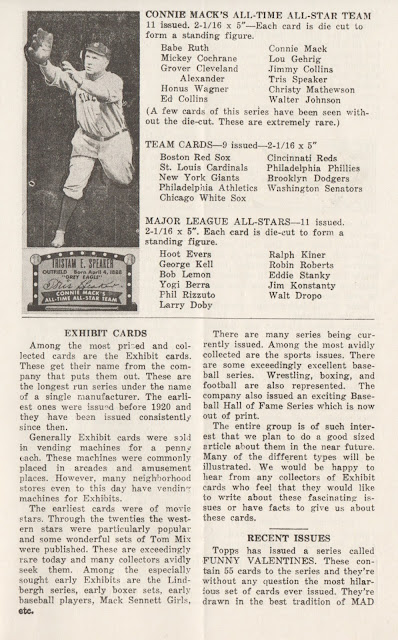 The Exhibit Card overview is interesting and probably designed to insert some content that was not Topps related.  I would imagine Woody was big on collecting Exhibits based upon his promise to delve into the myriad issued from ESCO. Perhaps he scored them at Coney Island when he was a kid. 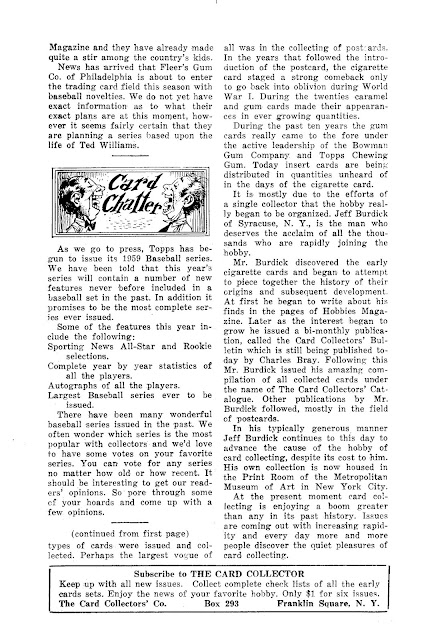 I'm not certain if a Card Collectors Catalog came along with these.  It's highly likely to my mind but none were mixed in with the publications I bought.  There was a single paged sell sheet for 1960 Topps Baseball that came with one of the later issues in the run but that's all I saw other than Card Collectors Company advertisements, which commenced in issue two.

Woody was certainly enthusiastic about publication and it only took two months for the second issue to appear: 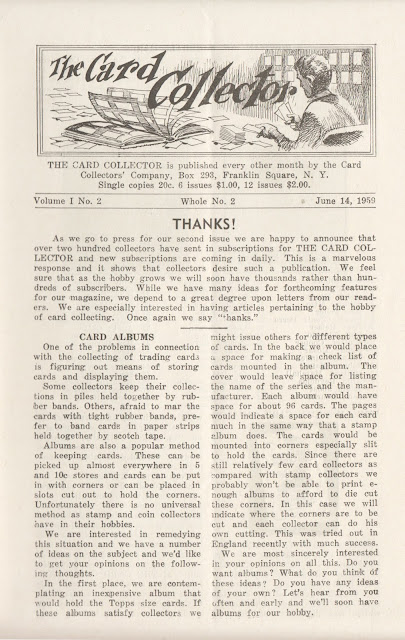 The album discussion above is strange as Topps had already come out with a Hobby Card album premium that featured slitted pages.

Woody is being modest below as he was a masthead editor of the ACC: 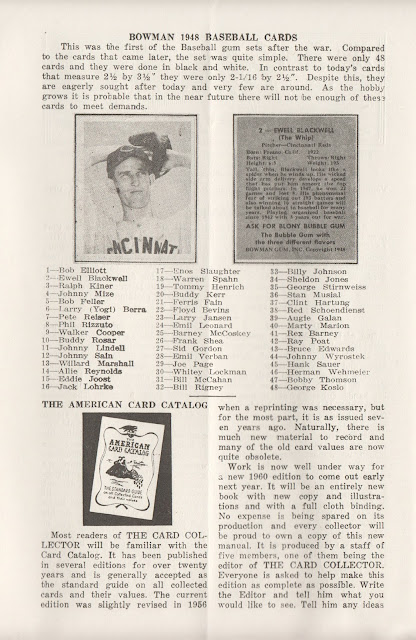 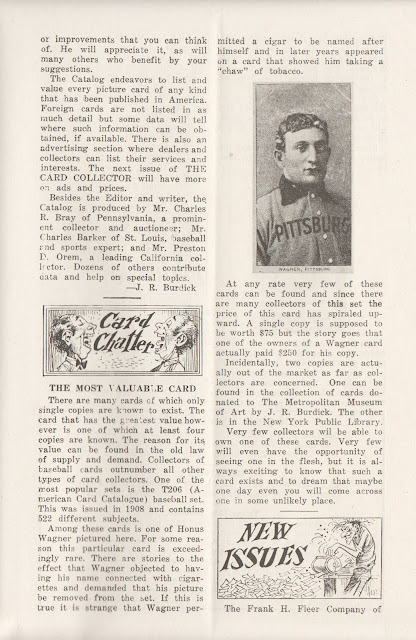 The back page is the most interesting of the issue.  Those are the first nine players in the 1959  Bazooka set. 14 more would be issued (plus an Aaron variation) shortly thereafter, likely along with the original nine. CCC offered this first set of nine for a buck!  I wonder if they got flats from Topps and just cut them down? 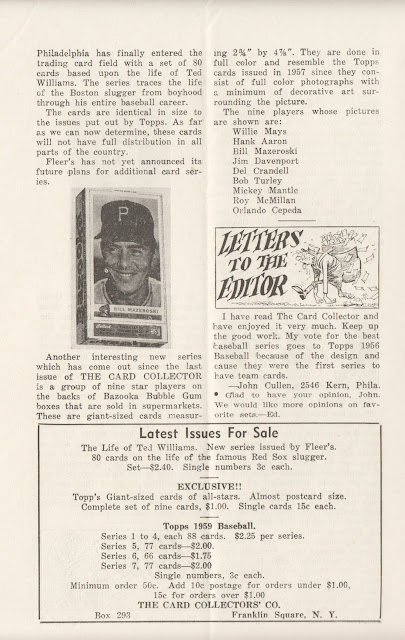 The third issue was essentially one long checklist showcasing the 1959 Topps Baseball cards. As you can see, the checklists were a teaser for what would become the Card Collectors Company Checklist Book a short time later. 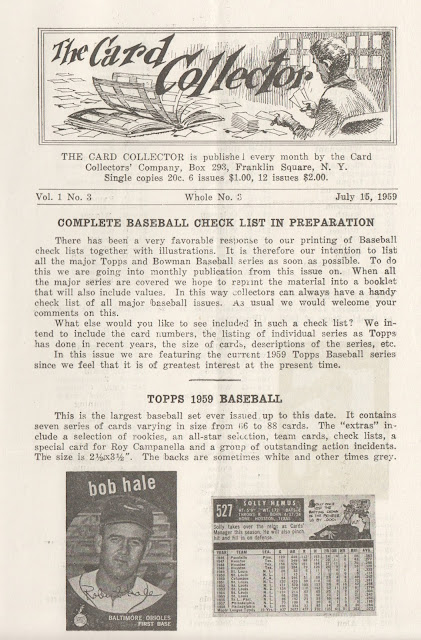 No point in showing the rest of the issue, its contents are available in any price guide.  Instead, here is the CCC Checklist Book: 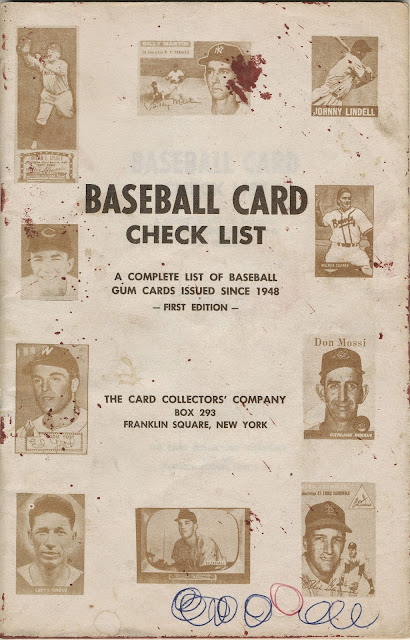 Amazing! I love the breathless reporting that someone might have paid all of $250 for a T206 Wagner!

Thanks for a great look at some the earliest hobby press. Looking forward to seeing some of the later issues.